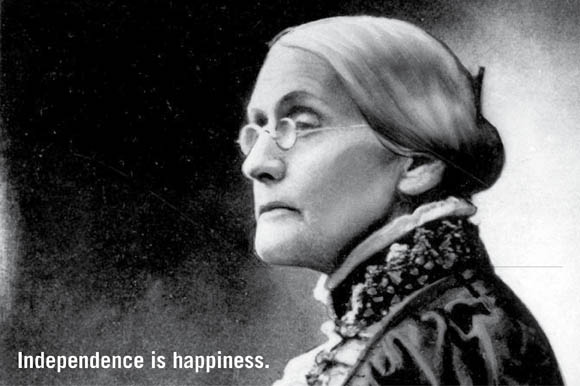 Susan B. Anthony was born on February 15, 1820. Anthony was raised in an extremely religious Quaker home and became a teacher. Being a teacher was not her only occupation; Susan B. Anthony also was a leader of the abolitionist women’s voting rights movement. Eventually, Anthony lead the National American Woman Suffrage Association and she later died a devoted activist on March 13, 1906.

In 1846, Susan B. Anthony was 26 when she became the head of the girls department at Canajoharie Academy. This was Anthony’s first paid position where she earned $110 dollars per year. She quit after two years because she felt equal opportunities for all students were not being offered. In the 1800s, schools were separated by gender; Anthony found this to be extremely unnecessary and unfair.

In 1859, Anthony spoke at the state teachers’ convention in New York and in Massachusetts, vigorously fighting for coeducation. Anthony stated again and again that there is no difference when comparing the minds of men and women and demanded educational facilities to recognize this as well. Anthony called for equal educational rights for everyone, regardless of race. She also asked for all schools, colleges, and universities to start enrolling ex-slaves. She wanted to grant children of ex-slaves the right to an education as well.

In 1890, Anthony was on the board of trustees for Rochester’s State Industrial School, advocating for coeducation and equal treatment of students of both genders. Later, she raised over $50,000 in pledges so that women could join University of Rochester. In order to make the deadline, at the last minute, she took out the cash value for her life insurance policy. The University was then forced to make sure that both genders were admitted. Determination, gull, and a strong mind is what made Susan B. Anthony such an influential leader and inspiring woman.