Right from when we are babies, we are raised with heteronormativity pressed against our tiny shoulders. From seemingly insignificant comments such as referencing a male baby and saying, “He’s such a ladies man! Already looking at girls!” to more major things like to telling your ten year old girl that she isn’t allowed to be around boys or she will do something immoral…at ten, a lot of people grow up thinking they’re straight; it’s very pushed on us.

You don’t know what true confusion is until you start to question the instincts you were born with regarding partner selection. In being remarkably unable to come to terms with my own sexuality, a hole was ripped in my self esteem. Things sometimes become a little irrational; people detach from you, and you wonder if it’s because they secretly disapprove of your preferences. If a friend asked if you want to room together after discussing shared college ideas, your first thought should not be, “She won’t want to room with a gay girl.”

At around six years old, my childhood best friend said to me, “I wish we were lesbians! Then we could get married.” Not understanding what that meant, I went on idly staring at the ceiling, agreeing with her. How cool would it be to marry my best friend? That was the first time hearing that word; that moment that stuck with me.

Fast forward to sixth grade. I made new friends. I invited them all over to stay the night. When one of the girls left, I mentioned her telling me she kissed a girl once to the remaining few who were still there. To me, it was something I didn’t ever hear of, and I wanted to know what they thought. “I changed in front of her! That’s so gross,” was the immediate response from my cousin. That was the moment I discovered my family’s intolerance.

In seventh grade, rumors started to circulate after I started to advocate for gay rights and lobbed my hair off. I felt stared at and did not have a good feeling about being in the locker room. “I don’t want to change next to a lesbian!” I started to change in the showers no one used instead. I felt like a middle school bullying cliche come to life. That was the discovery of the intense homophobia my peers possess.

Fear became my identity, not because I was bullied at the prospect that I may be gay, but I was scared that I was.

That was my worst nightmare. I would be thrown out of my friend group, my family would hate me and I would be viewed as sinful and devious. I remember spending the night at a good friend of mine’s house weekly, always petrified to drift off in case I spoke in my sleep, telling her that I was questioning my sexuality, something I, myself, wouldn’t come to terms with. I would never have imagined myself that way, but deep, deep down, there was a gnawing feeling that wouldn’t go away.

Freshman year, hanging out with girls intimidated me. They would talk about boys they like, or sexual experiences with them. I was inexperienced and uninterested. I could never see what they saw, but I pretended I was just as straight as the rest of them, because I thought I was. At this point in my life, I was in a relationship with a boy. But nothing was ever physical; given that, there was no way of figuring anything out.

By the end of freshman year, questioning myself felt like the only thing I was good at. I started to poke at the term “pansexual.” It was a time of a lot of self reflection.

As time progressed, I settled more in with the fact that I didn’t think I’m straight. But fear was still eating away at me. Only a few people knew, my now ex-boyfriend not included. That would be too confusing to tell the person you were with for much over a year that you think you may be a little gay. I felt forced to hide part of who I was because of the backlash and turbulence I would endure if I came out.

I finally faced my anxieties of telling him, and it was as close to fine as you could get. He was confused at what exactly I meant when I explained that I don’t think I’m really attracted to boys as I expected. After that, however, it felt like there was a meager upset in the relationship.

We later broke up for, as far as I know, unrelated circumstances. In my time period alone, I had a lot of time for self reflection and trying to figure out what, and who, I liked. I mulled over that maybe I was a lesbian, but I could also be bisexual, or pansexual.

On coming out, the truth is, there’s no right time.”

It wasn’t until I met my current significant other that I finally got a grasp on it. For those who know me, yes, I am in a relationship with a boy, and yes, the initial attraction was there. There’s acceptance there, and he doesn’t mind the fact I’ve struggled with this. This I’m grateful for.

Everything was going fine keeping it on the down low for a very long time, until about December when I was forcefully outed to my mom by my doctor. She accidentally brought up a private statement of me saying I had a preference to girls. The reaction was a small reach from miraculous; there wasn’t one. Later, looking back, there was a lot of luck that was at play there.

On coming out, the truth is, there’s no right time. Everything always has risks, and sometimes what you’re waiting on may never happen. Sometimes the perfect reaction is not even in the ballpark, and you just have to either take a shot or keep it in. A good friend of mine, who will remain anonymous, knows this when they said,  “I’m pretty sure my mom is going to react in a very passive-aggressive way. She always claims she doesn’t care if someone is gay, and it’s their choice apparently, but she always changes the subject when the topic comes up. If and when I do come out to her, I don’t think she’ll necessarily disown me, but her opinion of me will definitely change. I know she won’t look at me the same. I’ve dropped many hints about it, but I don’t think she’s understanding that I’m serious. It’s really hard to get through to her, because she’s so closed-minded about it. I’m honestly so scared for her response when I tell her.”

It’s 2016, and we still have ourselves rooted in fear of being open about something we can’t control. People still don’t understand, and they want to choke the community in what feels like a war over rights. Basic human rights.

After spending years in confusion and hoping to find out who I am, I don’t have things figured out in a way that probably makes people comfortable, but that’s okay. High school is a time for figuring out what and who you like. It’s for yourself, and knowing who you are.

I don’t have a label for myself nor do I need a label to feel comfortable in my own skin.

You feel what you feel. 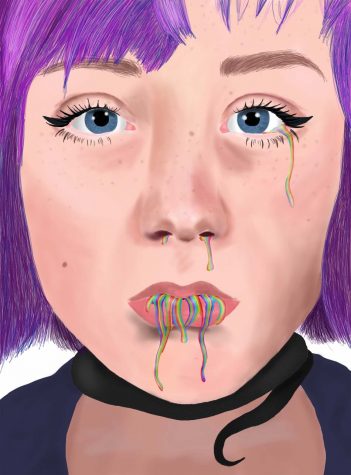 12 Responses to “On Coming Out”