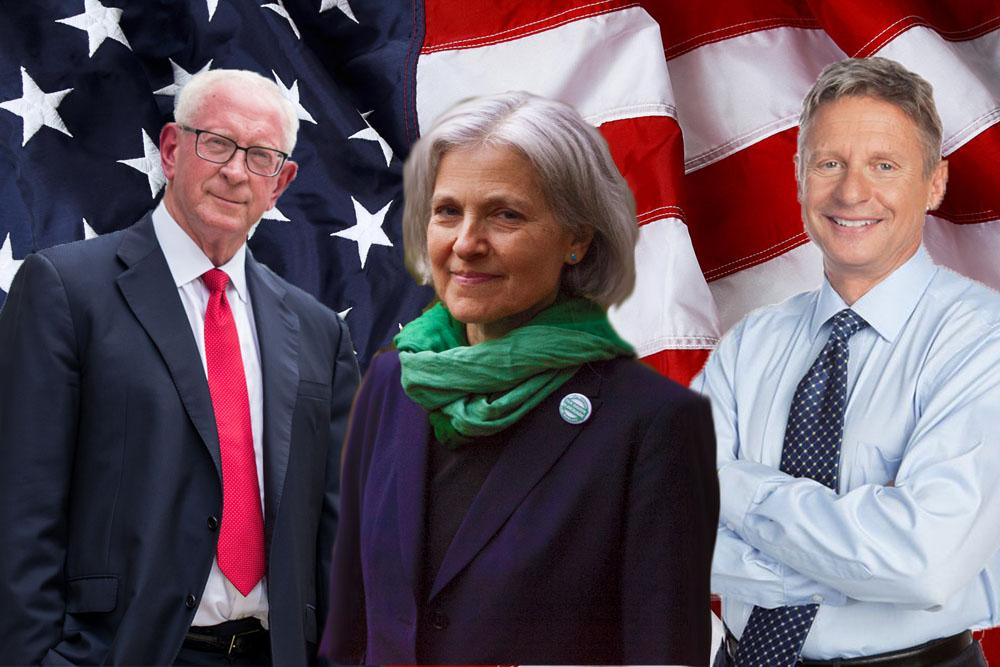 Third Parties could be Your First Choice

With the presidential election coming up in less than one week, it seems appropriate that people should be aware of all of the potential presidential candidates, even if they already have their sights set on either Hillary Clinton or Donald Trump. Yes, you have probably heard the popular phrase “Voting third party is wasting your vote”, but how can you be so sure that’s the case if you don’t even know what the third parties’ values are? To better educate you in the world of politics, here are a few of the current third parties that have presidential candidates.

Yes, libertarians are not exactly “lesser known”, yet many people still do not know what Gary Johnson and his Vice President nominee William Weld stand for. For starters, Libertarians promote civil freedoms for all people. This includes every basic human right, as well as constitutional rights, for everyone, including minorities. They are also pro-LGBTQ rights. The party also promotes non-interventionism, which refers to other political leaders not forming alliances with us, but staying peaceful and diplomatic. The Libertarian party also stands for laissez-faire capitalism, a form of exchange among private parties that is not affected by governmental interference like tariffs. They are against the welfare system and the IRS. They’d like to get rid of both, which is part of their plan to lower the national debt, as well as lower taxes. The Libertarian party would also like to end the War on Drugs, and thus end the prohibition of illegal drugs. They also typically support same-sex marriage and gun rights, and would like to get rid of capital punishment as a crime deterrent. Considered a sort of an “in-between”, the Libertarians are noted to be more culturally liberal than the Democrats, focusing on rights for everybody, and more fiscally conservative than the Republicans, wanting to lower taxes but also make social security optional and get rid of the IRS entirely.

Presidential candidate Jill Stein, alongside VP candidate Ajamu Baraka, are hoping to win the election under the Green party. The Green party is a progressive, eco-socialist party that focuses immensely on environmentalism. The party believes that everybody should be ecologically aware. They also believe in a grassroots democracy, in which the common people get to be the sole decision makers in politics. As far as fiscal policies go, they would like to form a community-based economic system and strongly advocate decentralization, which would get rid of the power the wealthy have for the most part. The party also highly supports non-violence, gender equality, LGBTQ rights, and are strongly against wars and poverty as well as governmental interference. They want everything by the people.

The Constitution party under presidential candidate Darrell Castle and VP candidate Scott Bradley were originally founded as the “U.S. Taxpayer’s Party” and has many conservative beliefs under which they run. The paleoconservative party stresses tradition and religious identity and wants political principles based on life, liberty, family, property, the Constitution, Bill of Rights, state rights, and American sovereignty, which is a form of government not affiliated with any foreign states. The party stands under the firm belief that this country is Christian, founded on what is stated in the Bible, but does not think religious tests should be required for office positions. The party wants to get rid of income tax and instill a tariff-based revenue system instead. They would like to stop gun control entirely, and replace Common Core teaching with a more religious-based education. They would also like to get rid of Obamacare, and they are completely opposed to illegal immigration. As far as foreign policies go, the Constitution party would like to cut off the country’s ties with all foreign alliances, including the termination of our membership in the United Nations and the termination of any military or financial aid to other countries. The Constitution party would like to keep the country traditional and to itself.