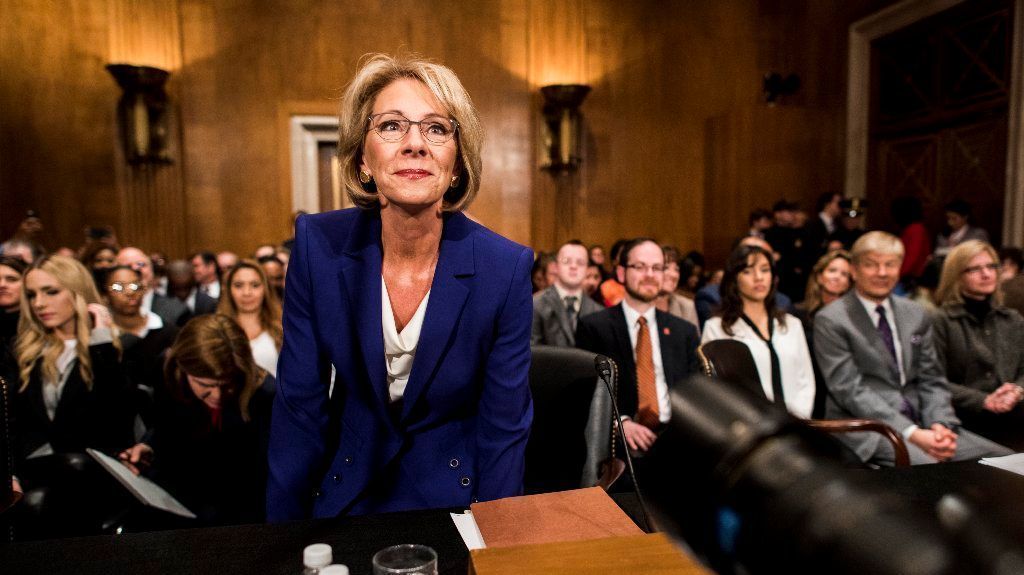 A teacher’s thoughts on Betsy DeVos

One of the great things about the United States is our public education system. Is it perfect? Far from it. Standardized testing, and the emphasis therein, loss of teacher autonomy, political bureaucracy (just to name a few) are some of the looming problems evident in our system. So does something need to be done in order to fix these, and many other, problems? Of course.

But Betsy DeVos does not present a fix to these issues. Here’s why.

Mrs. DeVos has devoted her time, energy, and (millions of) dollars toward privatizing public education. Her efforts have been centered around taking public tax dollars away from public schools and giving them to private institutes, both religious and charter schools, in the form of vouchers.

According to an Education Policy Analysis Archive, “Students in segregated schools […]  are likely to have limited contact with more advantaged social networks (often linked to information about jobs and higher education) and fewer opportunities to prepare for living and working in a diverse society (Braddock, 2009). As a result, it is important to consider what extent of interracial exposure— or lack thereof—the growing sector of charter schools provides for students.”

Charter schools further stratify areas where school choice is high. From the aforementioned Archive article, “Take, for example, the application process for a new charter school specializing in math and science. A parent or student must first hear about the charter program, which is dependant on the extent to which the new school has conducted outreach and advertising, whether materials were available in multiple languages, and if an encounter with another parent or contact provided information about the charter. The family must then navigate the application process, which often involves a lottery but also can mean a combination of other requirements like testing, teacher recommendations, parental involvement commitment, or essays. If the student is accepted, then transportation to and from the school may have to be provided by the parent.”

Any school, public or private, is held hostage to logistical concerns around mobility, avenues of communication with the public, and vested interest groups. Charters do nothing more than muddy the waters of quality education by making it harder to find AND get to a quality center for learning.

There are many issues concerning the outcomes of charter schools. In general, charters have a similar, if not slightly lower, average outcome on standardized testing results across the board. Sure, there are outliers, some high scoring and low scoring schools, but across the board, they are not setting out to do what it seems their goal is. According to the BBC, “The American Civil Liberties Union (ACLU) said her work in Michigan involved ‘elevating for-profit schools with no consideration of the severe harm done to traditional public schools’ despite ‘overwhelming evidence’ that charter schools were no more successful than their traditional counterparts.”

Also, these schools have fewer governmental oversights which invites abuse, both financially and educationally. According to the Center for Popular Democracy, $216 million in fraud, waste, abuse, misuse, and mismanagement have been found in charter schools in 15 states since 1994.

Sure, some charters work out well, but in the grand scheme of things, they fare no better than public schools across the spectrum of public education.

Saturday Night Live recently satirized Mrs. DeVos’ position on religion in public schools. She has long since been an advocate for blurring the lines between the separation of church and state. Many believe this statute to be an effort to protect the church from the state. The opposite is actually true. Separation is meant to protect public entities from being injected with religious indoctrination. Now I know that word, indoctrination, is a bit loaded, but can you imagine the outrage that would be present if your child’s public school changed its Pledge of Allegiance wording to “One nation, under (Allah, Shiva, Buddha etc.)”?

“I have decided […] to stop taking offense at the suggestion that we are buying influence. Now I simply concede the point. They are right. We do expect something in return.””

DeVos has been a long time advocate for religion to be present in public education, saying that she wants public schools to be tools to “advance God’s kingdom.”

Let’s now discuss her qualifications. She has none. Up to this point, DeVos has been a glorified lobbyist on behalf of religious and/or charter schools. She has professionally advocated the gutting of public education as we know it in favor of for-profit charters and parochial schools.

After a little digging, it has been found that DeVos and her family have given nearly $1 million to just the senators who voted for her in her Senate confirmation hearing on February 7th. The table below outlines the breakdown of the donations to these senators:

An argument can be made that DeVos seems to have paid for her cabinet position. In fact, DeVos said, “I have decided […] to stop taking offense at the suggestion that we are buying influence. Now I simply concede the point. They are right. We do expect something in return.”

Supporting DeVos is supporting gutting the foundation of our American society. As an educator, I can’t help but wonder what will happen to the profession I love that truly has our kids at the heart of its endeavor.

Check out this related story.