John Green’s Turtles All the Way Down Review

Nearly six years after the release of his last book, The Fault in Our Stars, John Green is back, and yep, he did it once again. Just like he always does, Green managed to create the perfect mixture of friendship, romance, and heartache, and somehow, m 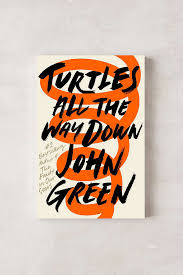 agically put it into words for his latest young-adult novel, Turtles All the Way Down. What makes this one, and all John Green novel’s if you ask me, so special is that Green doesn’t sleep on the teenage mind and it’s ability to comprehend even the most mature concepts. What sets TATWD apart from his other novels, however, and what in my opinion, makes it the best yet, is that it explores the world of mental illness as main character, 16 year old Aza Holmes, tries to cope with obsessive thoughts entirely out of her control. Green also publicly shared that Aza’s sickness was based off of his own experiences and personal battle with Obsessive Compulsive Disorder (OCD) and anxiety. One doesn’t need to suffer with the disorder himself to identify with Aza, but somehow Green is able to paint a perfect picture of the spiraling thoughts often associated with anxiety disorders in which everyone can relate to.

As the story unfolds, it is clear Aza feels as if she is a sidekick to not only her best friend Daisy, but to herself. She is constantly trapped in her own mind and over analyzes every stomach rumble and possible infection as she obsesses over the bacteria that lives inside her. It’s such a realistic depiction that I wanted to literally jump in the book to help Aza, and I think that was the point. I think Green wanted to emphasize that with disorders like Aza’s, sometimes, no one can help or even fully understand. Nonetheless, despite her constant apprehension and uneasiness, Aza manages to get pulled into a search for an old friend’s missing father and with that, another John Green classic, unconventional love story is born (surprise, surprise). As Aza and Daisy try to get to the bottom of Davis’ father’s disappearance, Green illustrates the awkwardness and vulnerability of young love, both in the form of romance and friendship, in it’s purest form.

I’m not going to lie, the ending of the novel left me a little shaken up. It’s the type of ending that leaves you staring at the last page for an uncomfortable amount of time and makes you contemplate turning back to page one and starting over immediately. Yeah, there is loss, and it’s definitely a tearjerker (in a good way), but what else can you expect? It is John Green, after all. It’s probably not the ending most people were crossing their fingers for, but Green reminds us all, “The problem with happy endings is that they’re either not really happy, or not really endings…In real life, some things get better and some things get worse.”