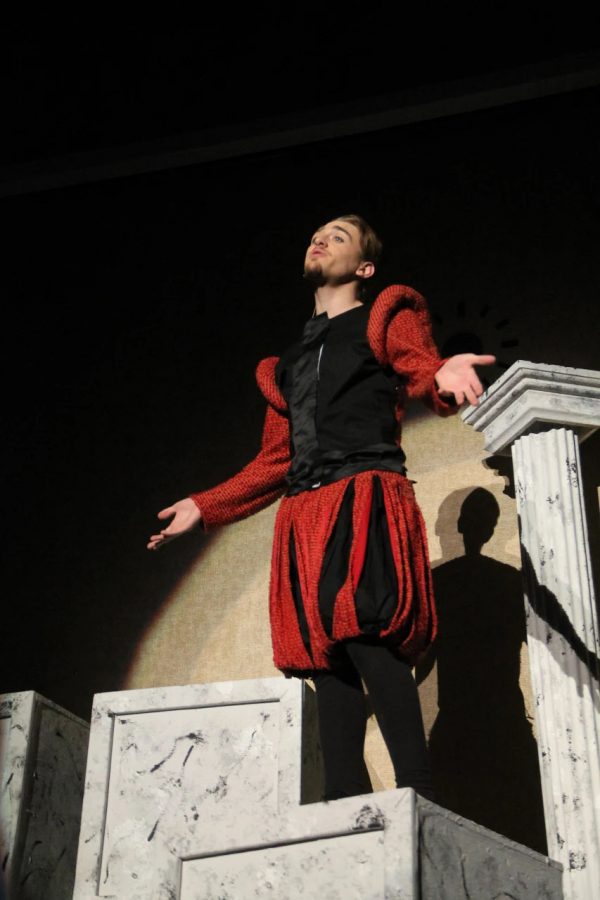 Thoughts on Kiss Me, Kate

The recent MHS production, Kiss Me, Kate, was a show within a show. Throughout, scenes from the Shakespearean play, Taming of the Shrew, are mixed in with aspects set in the 50s throughout acts one and two. Walking into the auditorium of MHS, the first thing one notices are the props on both sides of the stage: on the right side of the stage, large wooden boxes are painted grey with black to give the appearance of texture and the left side of the stage was made to look as a balcony which was interesting. It definitely felt like Shakespeare.

When the lights went out and the orchestra began to play the overture on Friday and Saturday morning, senior Logan McCullough and Saturday night and Sunday senior Patrick Nay took on the role of Fred, walked down the aisle and took a seat in the audience. Then, they watched the stage for a few minutes while jotting down notes on a clipboard. It felt as though you were watching a rehearsal. After the orchestra was finished, band director Ken Belt turned around and asked Fred if that was good. That gave off the vibe of an interesting and exciting show to come.

As it went on, senior Allison Griffin on the second cast and junior Andrea Rahman on the first cast played the role of Miss Venessi, a very rude and entitled brat. Fred returned that sour attitude back to her every chance he received. Sophomore Morgan Yount played a hustler and sang to sophomore Tyler Freed-long, (who portrayed her husband) “Why can’t you behave?” It was odd to watch and a little uncomfortable when she would lift her dress or make comments, but it gave a comedic taste every now and then.

The Taming of a Shrew portion of the show was quite hilarious at times. Fred, playing Petruchio, was an arrogant jerk and a character that most hate. Miss Vinessi played the role of Katherine Minola, otherwise known as Katherine the Curst for her appalling behavior that was vicious and strange.

The dancers from Studio J2 did amazing with jazzy snaps and leaps through the air. The two gangsters from New Jersey, played by seniors Dylan Adams and Nicholas Holmes, made you fall out of your seat laughing from just watching them. The best part was hearing them sing “Brush Up Your Shakespeare” in Act two and at the end of the show as a closing song the from the entire cast.

The chorus and soloists did a fantastic job with challenging songs like “Another Op’nin Another Show” and “So in Love.”

Kiss me, Kate is not a common musical many know of, so going to watch it definitely requires some background knowledge. Act one felt long, act two flew by and then the musical was over. Overall, it was well done and the acting was impressive for high school students.