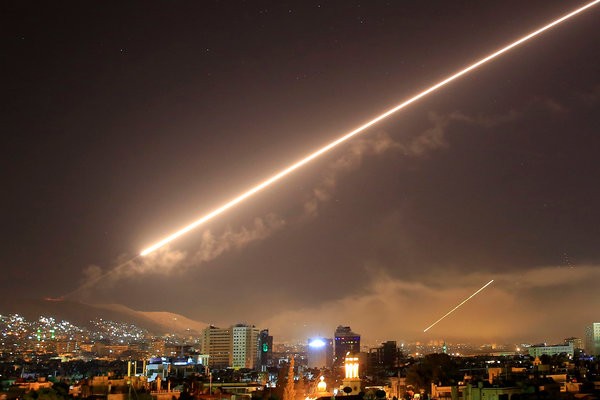 This is one of the many missiles that struck Syria.

As of Friday, April 13, it became known that the U.S., along with their allies (the United Kingdom and France) fired 105 missiles into Syria to combat the use of chemical weaponry. The chemical weapon attacks in Syria started about a year ago by Syrian dictator Bashar al-Assad. Over the course of a year, these chemical weapon sites significantly increased in the harm inflicted upon the innocent citizens of Syria. However, what essentially led the U.S. to fight back was the most recently suspected chemical attack that Asaad led on his own people. For this attack, sarin gas (a highly toxic, lethal nerve agent that is commonly used in chemical warfare) was supposedly used, killing many citizens, including children.

Following the attack, President Trump met with the national security team to discuss the various approaches on how to combat the Syrian government. In agreement with France and the United Kingdom, launching the missiles appeared to be the best option for this situation. The missiles did successfully strike. According to The Washington Post, “Gen. Joseph F. Dunford Jr., chairman of the Joint Chiefs of Staff, said the U.S., French and British forces struck three sites: a scientific research center near Damascus, a suspected chemical weapons storage facility near Homs, a storage facility, and a command post also near Homs.” Unfortunately, the Pentagon reported that even though the missiles did annihilate the targeted areas, there is still potential for more chemical attacks. In fact, the Joint Staff Director, Lt. Gen. Kenneth F. McKenzie Jr., said that chemical weapons are “spread through the country,” (cnn.com).

Currently, officials are still unsure of how Syria plans to respond to the missile strikes; that is, if they will respond at all. What we do know is that this is now the second time that the U.S. has launched missiles into Syria, with the first time being about a year ago. Because of this, there is some controversy over whether this will stop Assad from using chemical weapons, or not. If it does, this missile strike is only the first step of the U.S. goals for Syria. If it does not, then the situation may take a turn for the worse and lead to even more destruction.