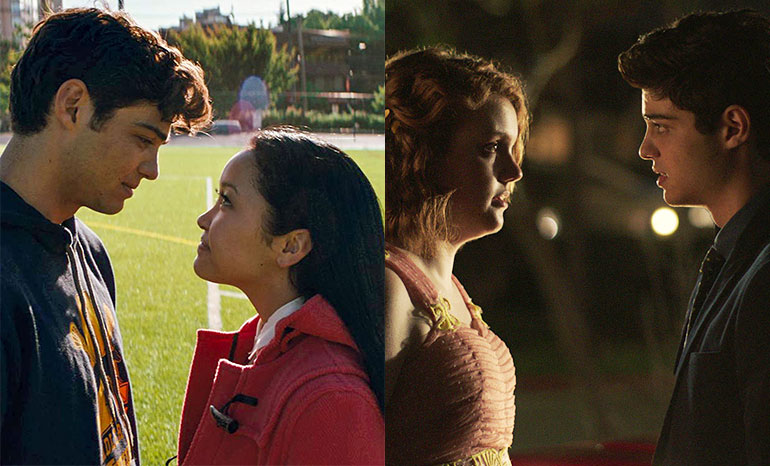 Scenes from To All The Boys I've Loved and Sierra Burgess Is A Loser (clevver.com)

In this day and age, if you ask anyone ‘What’s your favorite movie on Netflix,’ chances are they’ll have an answer. With 118 million people subscribed, Netflix continues to create powerful content for every demographic. One of the main audiences these influential movies touch is of a younger audience.

The films are known to the audiences for their dramatic situations. For example, in the film To All The Boys I’ve Loved Before, the main character, Laura Jean, faces a series of conundrums when her secret love letters are exposed to her crushes of the past.

“I am not a big fan of romance movies, never have been. I think they’re really cheesy. Half of them are too happy and relationships just aren’t like that but in To All The Boys I’ve Loved Before it kind of feels real…” said Makayla Capilla, a junior at Martinsville High School.

Capilla goes on to talk about how the situations presented in the film are similar to those that many people of a young age today deal with. “Girls are just really into love movies and they just really like to see that,” said Capilla. She first heard of the movie when Twitter was raving about the release and decided to check it out for herself. “I love this movie,” said Capilla.

Some feel that the Netflix Originals are satisfactory; others would disagree. The film Sierra Burgess Is A Loser features Sierra Burgess’ struggle when dealing with her insecurities about her body and finding herself. “Every girl kind of goes through the struggles of being insecure…but the way that she handled that is not the way I handled that,” said Olivia Ostler, a junior at Martinsville High School.

With all the attention the movies obtain comes people who view the concept from a different perspective. She feels that this movie, in particular, was focused around something very controversial; catfishing. She explains that the ending of Sierra Burgess, getting the guy wasn’t how things should go.

The impractical ending of the movie gave a negative connotation. Ostler also feels that there’s one key into why these movies continue to blow up. “Everyone loves a good romance movie, and that’s kind of what all of their content has been lately, is just romance I feel like they use that to draw out an audience,” said Ostler.

This summer was exploding with conversation about the hit movie, The Kissing Booth. “It was sweet and cute but it was kind of unrealistic at the same time,” said Ally Johnson, a junior at Martinsville High School. Even though Netflix produces a lot of romances, some viewers have appreciated the unusually unexpected endings.

“What I did like about it was that it didn’t really end like it was expected to from the beginning,” said Johnson. She describes how she also feels that she can connect with the main character, Elle Evans, in how they aren’t that good in making decisions.

Some feel that Netflix is taking over the way we do TV with them targeting a younger audience. “Netflix is mostly relating to teenagers and they do a lot of things teenagers relate to,” said Johnson.

Capilla talks about how the movies also bring up actors and actresses who are well deserving of the attention. “It’s creating a lot of competition for normal TV…” Capilla said. Whether Netflix being the ruler over entertainment is a good or bad thing is still up for debate. With the recent explosions over social media from their latest hits, the younger audience is excited and sees the positives on it.

One Response to “Netflix Changing TV”