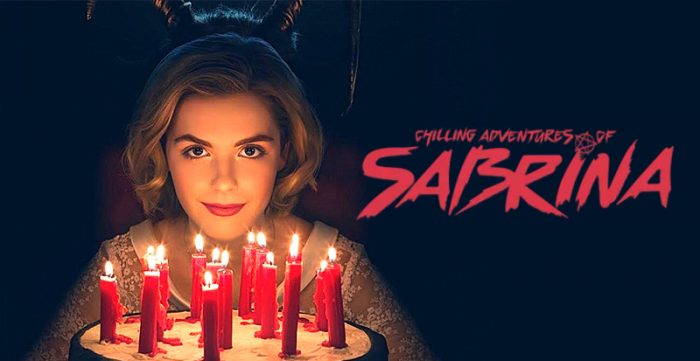 Thoughts On: The Chilling Adventures of Sabrina

On October 26, 2018, The Chilling Adventures of Sabrina, a reboot of Sabrina, The Teenage Witch, was released across the nation on Netflix. Creepy timing before the main characters sixteenth birthday on Halloween.

Netflix is being sued for $50 million against a religious group that goes by “Satanic Temple” for using the groups copyrighted designs in the show.

The show is much darker than I was expecting it to be.

While the first opening scene may have looked like innocent high school underclassmen just watching a horror movie, it became much, much darker. I’m talking blood, dead bodies, and demons in the first five minutes. Of course, at that point, why wouldn’t I just switch the show to a comedy or a kids show? It got interesting.

Giving your soul to the devil and having insane witch powers is what every teenage girl wants, right? No. Right before Sabrina does just that, she runs away from her dark baptism. She wants to learn more about witchcraft, but also stay in the mortal world. Watching this made it seem less scary and have a more normal element to it.

Honestly, this Sabrina is what every teenage girl needs to feel inspired to conquer the world.

Each episode may have been an hour long and at times it felt like it was dragging by, but it was very entertaining. The show is contracted for two seasons, and each season will contain only ten episodes. The shows characters consists of a gay cousin on house arrest, two aunts completely opposite from each other, a clueless boyfriend, and two best friends who are as sweet as they are strange.

The hardest thing about the show to understand is what time period is it set in. The only thing that is clear is that they live in the town of Greendale on the other side of Sweetwater River adjacent to Riverdale. The Chilling Adventures of Sabrina was once a comic book series related to Archie comics.

In the end, we are left with a soulless Sabrina and Lilith, the mother of all demons, prepping Sabrina for Satan. Ambrose is stuck at the academy with his boyfriend. Harvey and Sabrina break up because she is a witch.

This is definitely not a show for people who are against blood, violence, and very gory images.

While you may have been hoping for a talking cat named Salem, Netflix gave viewers much more than a sassy black cat. Netflix gave us the cliffhanger of 2018. On December 14th, Netflix will be releasing a holiday special that will hopefully clear up some of the questions that were left unanswered from the first season finale.