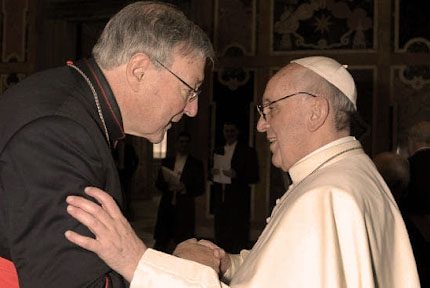 Pope Francis and Cardinal George Pell meeting in 2013. Photo by: The Australian

Pope Francis and Cardinal George Pell meeting in 2013. Photo by: The Australian

Over the past several years, many members of the Catholic Church have been caught up in sexual abuse scandals causing the Pope to be under fire for negligence. The Pope has recently taken measures to show the world that he is taking these accusations very seriously.

As of December 12, 2018, two cardinals have been ousted from an advisory panel to the Pope after one of these cardinals was convicted of sexual misconduct by an Australian court.

George Pell, the former Archbishop of Sydney and Melbourne and the Vatican’s ex-chief financial officer, is currently facing multiple charges involving the molestation of choirboys in the late 1990s.

In addition, Javier Errázuriz was accused of covering up sexual abuse involving Chilean priests causing him to be unseated from the council as well.

Both of these cardinals served on the C-9, which is a group of cardinals who served as direct advisors to the Pope regarding Church governance and reform.

The Pope has been heavily pressured to expel these two men for months. He has been personally involved in this scandal because of his hesitancy to remove these two men from his personal council.

After public outrage, Pope Francis has taken a new approach to the predatory leaders of the Catholic Church. He has summoned archbishops from all around the world to a three-day summit in February regarding the disturbing behaviors of many priests and archbishops. He hopes this summit will allow him and other leaders of the Catholic Church to find ways to protect young Catholics from the abuse they’ve faced for years.

Pope Francis has released these two men ahead of an important summit on sex abuse that will take place in February of 2019. In addition to these two men, Laurent Monsengwo Pasinya, the ex-archbishop of Kinshasa, has retired from his role on the Pope’s council, leaving the council with only six members. Pope Francis has no intention to fill these vacant seats anytime soon.

One Response to “A Worldwide Scandal”