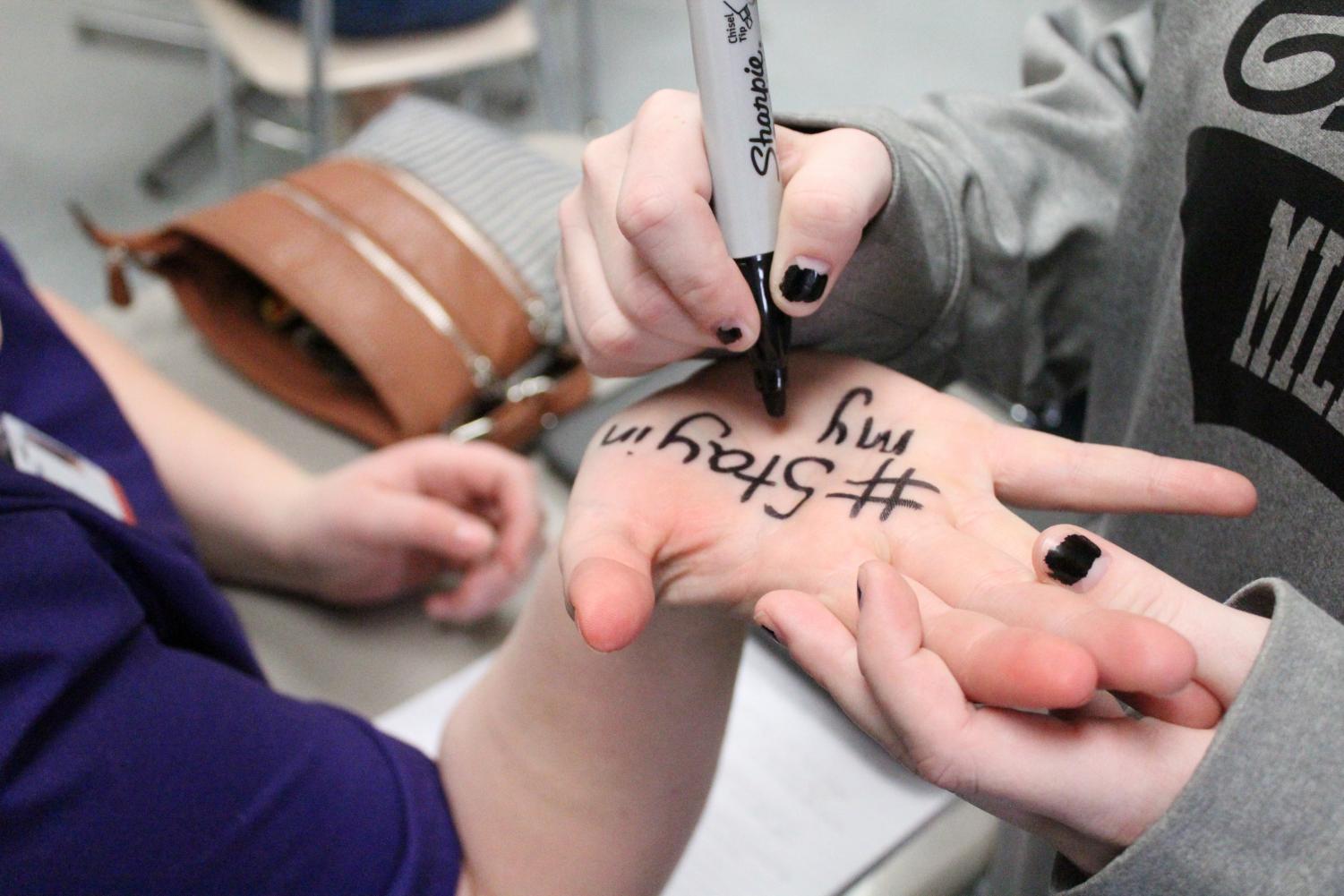 Nursing student Makayla Findley gets #StayInMyLane written on her hand.

The NRA’s recent statement for doctors has raised concern across the country. In their recent Twitter post, the NRA stated that “Someone should tell self-important anti-gun doctors to stay in their lane. Half of the articles in Annals of Internal Medicine are pushing for gun control. Most upsetting, however, the medical community seems to have consulted NO ONE but themselves.” This received a social media backlash movement from doctors, parents, and concerned civilians everywhere. This movement is known as #StayInMyLane, and has spread from coast to coast — including Indiana.

Even close to home, doctors and nurses have their own opinions of this tweet. Krissy Graves, a registered nurse of Franklin, Indiana has also heard of it. “I’m not sure of the exact time, but I saw it on Facebook, and I never saw the whole tweet until today,” Graves said. “But I had heard about it and saw the outrage of doctors and nurses just due to the NRA trying to tell them that they shouldn’t have a say in gun control.”

Graves, and others, do have their own opinions about this controversial tweet. “I felt like the NRA really shouldn’t have said that because, yeah, doctors shouldn’t necessarily have all the say in gun control, but they are the ones who have to take care of people’s gunshot wounds and the injuries from guns so they should have some kind of say in it,” Graves said.

To Graves, participating in a movement against what the NRA said would depend on things most would agree are reasonable. “If it’s just people fighting online then probably not,” Graves said, “but if there was a convention or something nearby that I could go to easily, just to get more information and see both sides and hear everything and it was peaceful, then I maybe would.”

But there is more of a message to the NRA behind this outcry from doctors and nurses. “I just think it’s important that the NRA needs to understand that doctors, you know, they deal with this first hand. Why did they need to call them out like that? I just don’t really see the point in it,” Graves said.

Whether the #StayInMyLane movement will have any sort of lasting impact is yet to be proven, but already America has seen this viral movement bring together doctors and concerned citizens everywhere. For now, it’s best we stay in ‘our’ lanes and report as best we can for everyone out there reading.