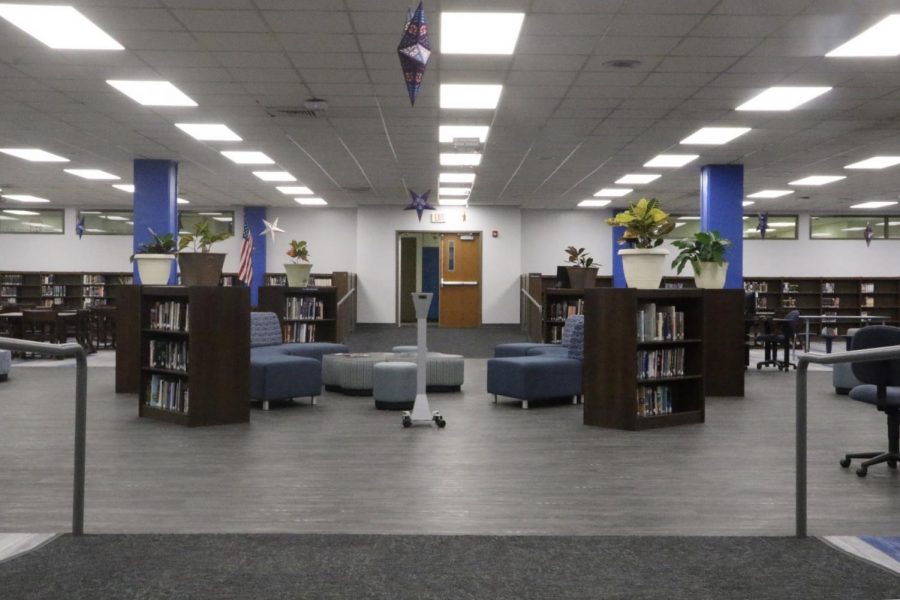 Walking in the doors of the new IMC.

Libraries are changing, and right in the midsts of this change is Martinsville High School’s own IMC.

The change began with librarian Lois DeHoff in the fall of 2017. After visiting Franklin High School’s new library, DeHoff decided to take a closer look at the book collection at MHS. “There were a lot of books that were just falling apart,” DeHoff said, “they were irrelevant, and the covers were just yucky.”

She created a cut off date within the library management system, and any books that hadn’t been checked out for five or more years were removed from the library. This would mark the beginning of a great change for the IMC’s appearance.

After reorganizing the library’s book stock and rearranging the shelves, DeHoff was approached by interior decorator Janice Feltner, who had been in charge of several room designs throughout the district. Feltner told DeHoff that she could do a free rendering for the library if DeHoff was okay with it, and with permission, created a rendering of what the library could look like. By this time, however, it was the end of the 2017-2018 school year, and DeHoff was convinced that the rendering would not become anything more.

When the 2018-2019 school year began, however, DeHoff came back to find that superintendent Dr. Michele Moore was interested in the rendering. Feltner, who had just finished working on the science wing, was also eager to see the project take off, and insisted on the new look.

Once the library was opened a week after Christmas break to the students and staff, there was nothing but positive comments and energy about the new area.

“Amazingly no one has been upset at all,” said DeHoff, even though there were a few complaints about the shade and that they believed that some things were going to be a certain way. Many students have already settled into their own spots during the mornings and afternoons, comfortable with the new furniture and area, talking and communicating with each other.

DeHoff even says that the libraries “are not quiet anymore, they are not just these spots for just books; I like how they [students] use it to socialize and to congregate. And I do think that it will draw in groups of kids, bring in loners, bring in people who need to study.”

The library is now a socialized and modern place to visit in the school. Students are allowed to eat, read, work, and hang out with friends in a friendly, new environment. Miss DeHoff, and the rest of staff that works for the IMC, are happy and excited for the new page turn of the IMC, and to see the changes and next steps for their new story at Martinsville High School.