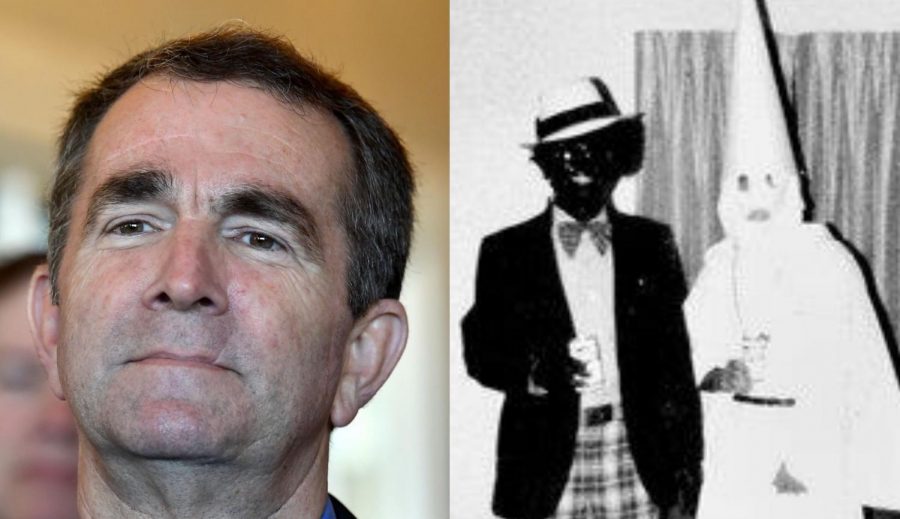 Photos courtesy of NYT and Axios

Virginia Governor Ralph Northam in blackface in yearbook, on right.

Recently, the governor of Virginia, Ralph Northam, has been under fire for photos that have resurfaced of him with his face painted black from a 1984 medical school yearbook. In the photos, he seemed to be mocking African-Americans by having black face paint on, with fellow medical students surrounding him, decked out in KKK attire.

This is not the first issue that Governor Northam has faced in regards to racism. During his 2017  campaign for governor, records were released that proved his family owned slaves. Additionally, his Alma mater, the Virginia Military Institute, continues to use the Confederate insignia.

Originally, Northam denied being involved in these photos. Then, he claimed he had no memory of them and was not sure if he was, in any way, included in the photo shoot. He eventually admitted that he put on blackface as part of a costume; he was trying to portray Michael Jackson at a costume party.

Many fellow politicians and constituents of the governor have called for his resignation, including the Democratic Party of Virginia and the Virginia Legislative Black Caucus. In addition, several congresspeople at the national level, and the leader of the NAACP, have encouraged him to step down from his office.

Amid these cries to resign, Northam has spoken at press conferences, apologizing for his past behavior. The governor admits that his actions were mistakes and that he was young when they occurred, citing that as a reason for his behavior. He has yet to resign, and he has said that he has no plans to do so.