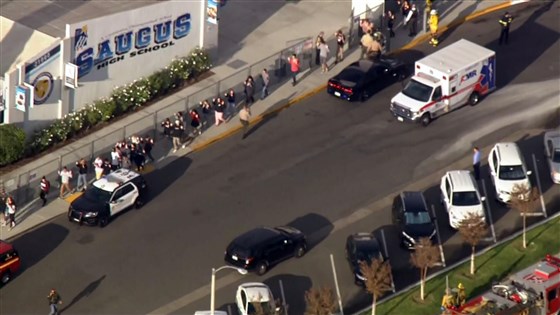 Multiple people were injured, at least three of them critically, in a shooting at a Southern California high school on Thursday morning, officials said.

About an hour and a half after the shooting was reported at about 8 a.m. at Saugus High School in Santa Clarita, Los Angeles County Sheriff Alex Villanueva said the suspect was in custody and being treated at a local hospital.

The Los Angeles County sheriff’s department earlier said the suspect was an Asian male wearing black clothing who was last seen at the high school.

Henry Mayo Newhall Hospital tweeted it had received four patients. One female and two males were in critical condition while a male was in good condition, the tweet said.

“This is an active shooter situation,” said a tweet from the Santa Clarita Valley sheriff’s office before the suspect was located. “If you live in neighborhoods anywhere near Saugus High, PLEASE LOCK DOORS and stay inside. If you see suspect, male dark clothing, in backyards, etc. CALL 911.”

“Parents, deputies are on scene everywhere protecting your children,” said a tweet from the sheriff’s office.

The Santa Clarita Valley sheriff’s office tweeted just before 8 a.m. local time to avoid the area of Saugus High School, which is in the county of Los Angeles about 40 miles north of the city of Los Angeles. Minutes later, the office said people were reporting that shots had been fired at the school.

Saugus was placed on lockdown as were neighboring elementary schools and all of the schools in the William S. Hart Union High School District, officials said.

Aerial video showed students with their hands raised, being escorted by deputies away from the school of about 2,300 students, NBC Los Angeles reported. They were transported from the campus on school buses with armed deputies on board.

An area was set up for parents to reunify with students at a park about three miles from the school.

This is a developing story; please check back for updates.