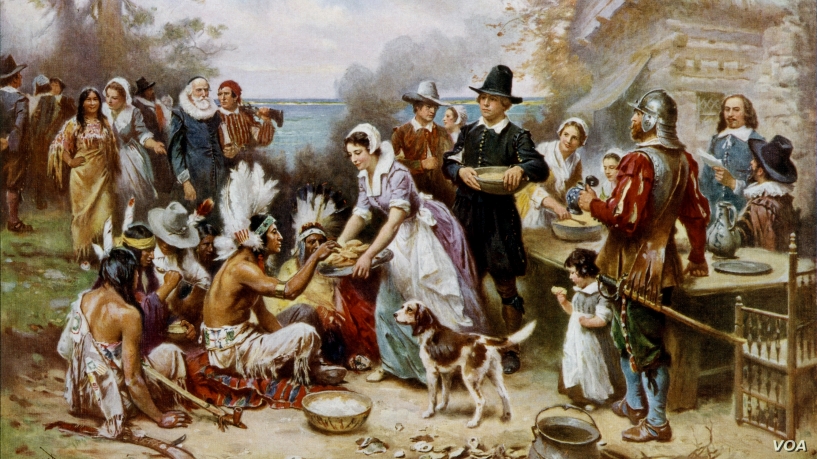 The Dark Side of Thanksgiving

The story of the first Thanksgiving is often sugarcoated by teachers. They tell their students about the Pilgrims and Native Americans who celebrated together in Plymouth. In reality, peace was not maintained by the English settlers and the Wampanoag Indians.

When children first learn about Thanksgiving, they are taught about the friendly Native Americans who helped the struggling colonists survive in the New World. Then, they celebrated their victory with a feast. About 90 men from the Indian tribe and 50 of the remaining Mayflower passengers attended the feast. This celebration lasted about three days.

Contrary to what most people believe, there is also a dark side to the holiday. Massasoit, the Paramount Chief of the Wampanoag, was a crucial ally to the English settlers after Plymouth was established. A trade pact was set up with the newcomers and they allied together against the French and other local tribes.

English colonists flooded into the region during the 17th century, but the authorities in Plymouth asserted control over the Wampanoags. Diseases reduced the Native American population by about 90% within 3 years, and the indigenous people continued to die from Indian Fever.

Metacomet, Massasoit’s son and known to the English as “King Phillip”, became the leader. King Phillip’s War ignited after Metacomet’s men were executed for Punkapoag’s interpreter’s death, as well as the death of John Sassamon.

The Wampanoags responded with raids. After this, the New England Confederation of Colonies declared war in 1675. The colony of Rhode Island and Providence plantations were involved in the war as well as nearby tribes. The war was very bloody and destructive.

After the fighting, Springfield, Massachusetts, was burned to the ground and the Wampanoags kidnapped colonists for ransom. English forces attacked many of the nearby tribes, including the Narragansetts, and 600 tribal members died. The surrounding tribes were forced to leave their land because the colonists took over their settlements.

Later, Metacomet was attacked by Mohawks on his journey in New York. When he returned to his home at Mount Hope, he was shot and killed in a final battle. He was beheaded and dismembered, and his remaining allies were killed and sold into slavery. Metacomet’s head was speared and put on display in Plymouth for 25 years to show their victory. This war was just one of the many between Native Americans and Colonists. More occurred in New England, New York, and Virginia.

Today, Thanksgiving is a holiday we all know and love, but it took hard work and perseverance to get where we are today. So, this Thanksgiving, be thankful for all of the people who fought so we could enjoy our day with food, football, and fun!