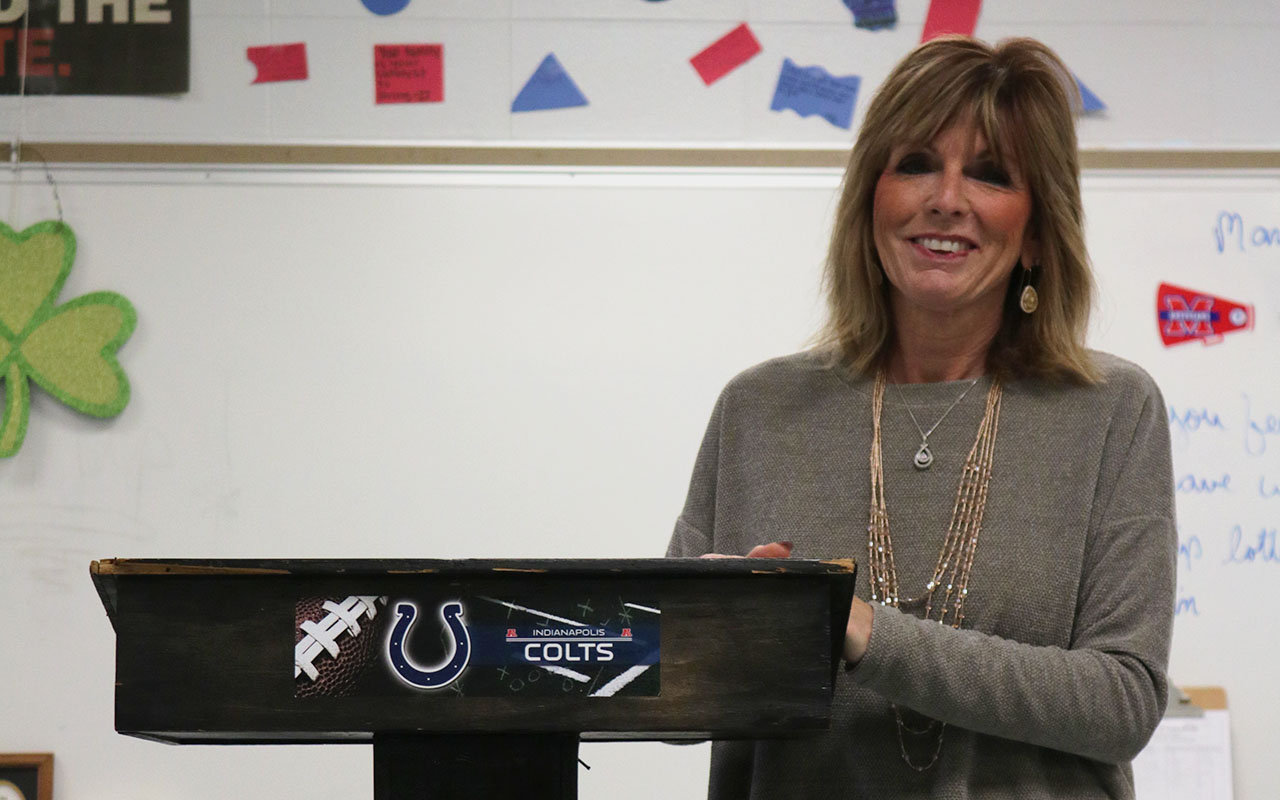 Mrs. Clodfelter stands at her beloved Purdue podium as she teaches the class. (Emma Allen)

Mrs. Clodfelter stands at her beloved Purdue podium as she teaches the class.

One of the Greats

Mrs. Judy Clodfelter is more than just a teacher; she is a role model and a well-respected member of this community. She has impacted many MHS students for the better, but, sadly, her teaching career is coming to an end.

Clodfelter’s teaching career started in 1991 making this school year her 29th.  She went to Purdue University and graduated with a degree in journalism. Branching out, she began teaching at an alternative school and fell in love with the profession, so she decided to go back to school and get her teaching degree.

She has cherished every moment of her teaching career and has formed many “families” over the years. Settling in, she has formed several new traditions that give her each of her classes a feeling of closeness. One of the more prominent ones is her famous “Clodfelter Coffee House,” where she gave students an opportunity to express themselves in front of the class through poetry and provides food to snack on while others are presenting.

Clodfelter embraces the impactful relationships that come with being a teacher. She loves when past students visit and catch her up on everything that has happened in their lives; she enjoys watching them grow and achieve things not only in the classroom, but also in their personal lives as well.

The thought of retirement is bittersweet; Clodfelter loves teaching, but she also thinks it is her time to leave. She wants to spend more time with her family, especially her granddaughter and her husband.

There is no doubt that she has made a huge impact on her students and colleagues. Braxton Dilley, a former student of hers, said, “She has impacted my life beyond the classroom and is one of the best teachers of all time. If you have ever wanted a best friend, Mrs.Clodfelter would be the one to have…She has been through a lot but still stays strong and is still an amazing teacher…She is one of my favorite teachers ever, and I wish [her] the best in the next step of [her] life!’’

Carri Randal, a fellow English teacher, said, “A favorite memory with her is when we went to a training session together about the writing process in Wisconsin and then came back and had to find fun ways to train our building on what we had learned.  We chose some very interesting Mad Libs exercises! I hope she knows that even though she is retiring, there are many people who will miss her and know she will enjoy spending more time with her grandbaby, because we see her face light up when she talks about her.”

Carl Wagner, another former English teacher and Senior Success Center coordinator, said, “ The kids love her because she relates to them so well, and because she cares, cares, cares.  I guarantee there are former students of hers making a difference out there in the world today because she made a difference for them.”

Brad Perry, an English teacher who works alongside Clodfelter, said, “She was a big part of my becoming a teacher as she was my supervising teacher as a student teacher. I learned a lot about how to connect to students from Mrs. Clodfelter. She’s a very  relatable teacher; I knew that is how I wanted to be as an early educator.”

“My favorite memory with her isn’t one but many. We usually see eye to eye on curriculum; we both love the “The Giver” series, we teach the poetry unit very similarly, and we overall approach the classroom in a very similar way. The things that stick out the most to me about her are the times we created really impactful units and lessons…ones where, when we were done, students would stay late and tell you what it meant or want to continue discussing the topic. It was awesome!”

When asked what he would like to say to her after her years of hard work and dedication, he said, “I would just want to tell her thank you! She has been a little extension of my family. When Maylee [Perry’s daughter] was born, Judy was one of the first teachers we came to show her off to; she dubbed herself “Aunt Judy” at that point.

She has truly made an impact on this school. Though we are sad that we will be losing one of the best English teachers to teach at Martinsville High School, we appreciate all that she has done and wish her all the best in her new journey in life!