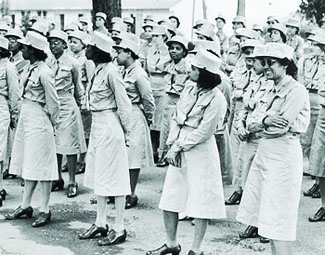 Women listening to their instructor during a war meeting.

Women listening to their instructor during a war meeting.

Should Women Be Drafted in the War?

Women have been fighting for equal rights for decades, so, when they heard rumors of a potential World War III after the Iranian attacks, why did the fight for these rights stop abruptly?

In January of 2020, a lot of Americans were fearful that our country would go to war. An Iranian General was killed by an American drone attack, and the Iranians declared that there would be revenge, but that would soon come to a pause when President Trump stated that sanctions would be threatened on Iraq if US troops were forced to leave.

This possibility of war scared teens and young adults all across the country. Many memes were made and blasted across the internet, featuring women who “wanted to be housewives” and how the world should “forget about equal rights, [women] did not want them anymore.” However, it came to a draft, women would have to be drafted.

Furthermore, why are women so afraid of war? It seems that as soon as one may have to go fight, they automatically want to stop the equal rights movement altogether. Women have fought for these rights since 1848, when the Women’s rights movement started. They have always strived to make themselves equal to men, so why stop now?

Women may feel as if they are not strong or brave enough to fight in the war, even though that’s not true. It is true that women may not have as many advantages as men in war, but that does not mean that women would not be able to fight as well.

They may also be afraid of death, as many are, and the possibility of leaving their friends and family behind with the chance that they might never return. This can be a scary thought for anyone going to war, not just women.

Lastly, women may want to leave their kids behind. A lot of women who are of age to fight have or will be having children in their life soon. These mothers may be afraid to be drafted due to the fact that they may not be able to find someone to take care of their children, especially if their husbands could also be/have been drafted into war.

So, do I think women should be drafted? Yes! I most certainly do, but I also understand why one would be afraid. Women fight everyday for rights that are equivalent to those of men, and that fight should not stop, even in the midst of a potential war.