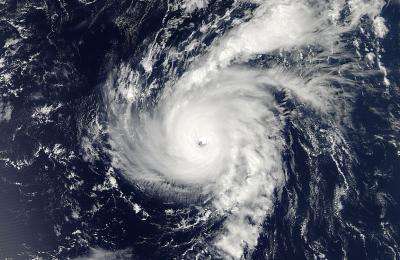 This is a photo of the eye of a hurricane. (https://phys.org/news/2012-09-nasa-eye-hurricane-michael.html)

This is a photo of the eye of a hurricane.

From August 20-29, Hurricane Laura struck the Gulf Coast. It was a powerful storm; some people even lost their lives. The community has come together through these devastating times to rebuild what was lost.

What started as heavy rain and flooding on August 20 quickly turned into the deadly Hurricane Laura. The Category 4 storm had winds reaching 150 mph. Leaving a total of 14 dead, hundreds injured, and thousands without power, Laura’s lasting effects will take months, even years to recover from.

Hurricane Laura was one of the most dangerous hurricanes to hit Louisiana.

To make matters worse in Louisiana, mosquitoes showed up to populated areas after the storm hit. Swarms of them showed up; they have been attacking livestock nonstop. Many livestock owners have lost thousands of dollars because the mosquitoes have killed their animals.

After this series of tragedies occurred, everyone tried to help each other. Because of the power outages, getting meals was hard. It only took one phone call from Rikesh Patel, an owner of some of the McDonald’s restaurants nearby, to get the kitchen on wheels to go to Lake Charles in Louisiana.  He served over 10,000 meals over a period of six days.

Because of the devastation of the storm, the community has come out stronger and more united than ever before. Hurricane Laura and the lives it took will be remembered, but, hopefully, and with the help of many, the affected communities will grow and learn from this tragedy and be able to move on from this difficult time.