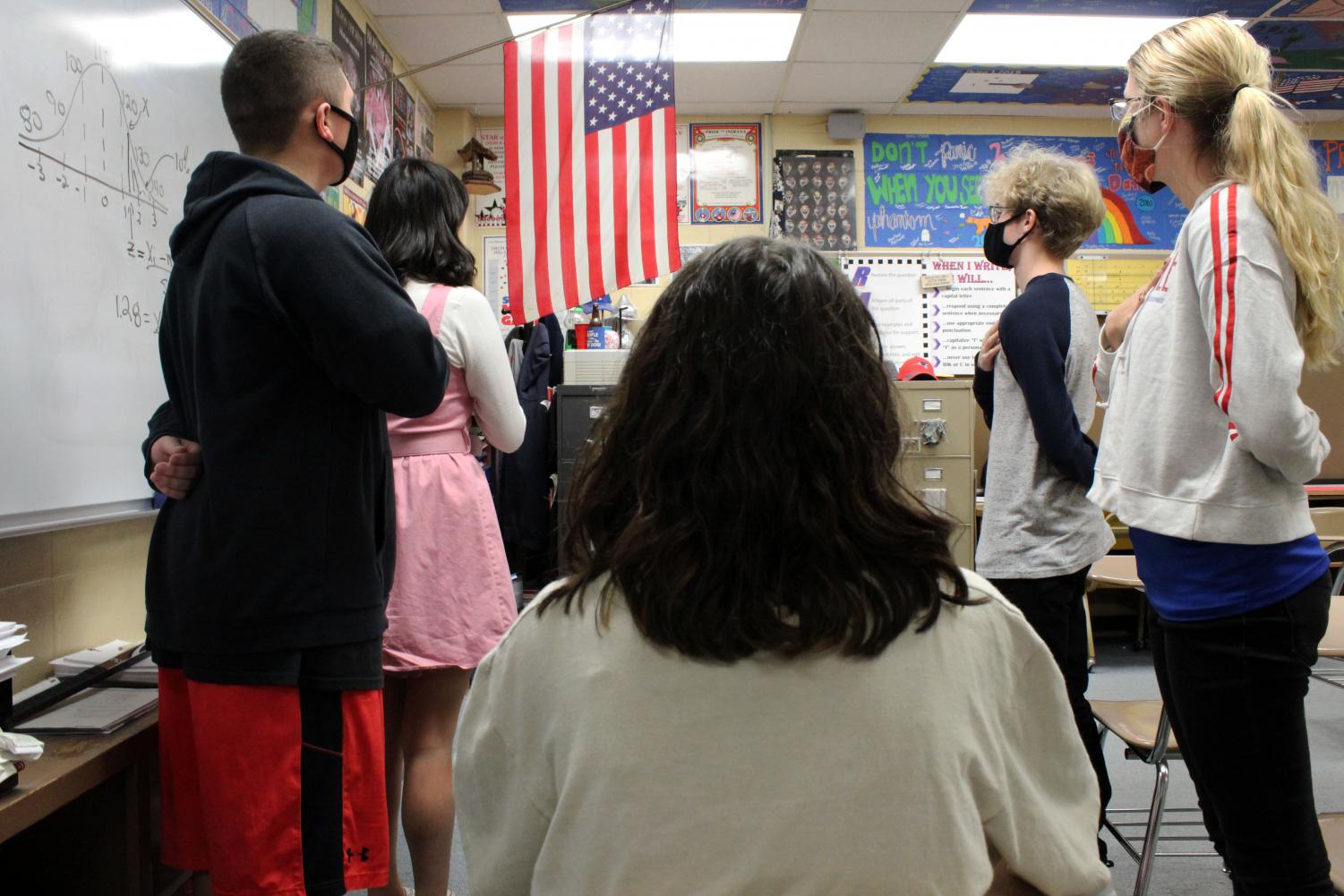 To Stand or Not to Stand: Should students stand for the Pledge of Allegiance? (Emma)

To Stand or Not to Stand: Should students stand for the Pledge of Allegiance?

To Stand or Not to Stand

Students have been standing for and reciting the American Pledge of Allegiance for decades. Since then, the pledge has become a nationwide tradition. However, standing for the pledge is not a requirement, and schools cannot discipline students who choose not to stand whatever their reason may be.

The Pledge of Allegiance was first written in 1892 and has since then been altered twice to add the words “the United States of America” and “under God.” Until 1923, it excluded any mention of the United States, because it was meant for any country to be able to use. The phrase, “under God,” was added on Flag Day in the year 1954 after Louie Bowman petitioned for the phrase to be included, claiming that Abraham Lincoln used the phrase in his Gettysburg Address.

Recently, there has been some controversy regarding the Pledge of Allegiance. The Black Lives Matter protests have served as a catalyst that has influenced many to change their opinion. Worldwide movements, such as this one, have sparked the minds of students to see more injustices, such as transgender rights, border treatment, and racial inequality, and it inspires them to want to do something about it.

A few Martinsville High School students have started to show their distaste for the pledge by choosing to not stand during it, which is often viewed as a silent protest. Some have shared their opinions as to why they have chosen to remain seated during the Pledge of Allegiance.

Those who have chosen to stay seated do so because they do not agree with some of the phrases in the pledge and do not believe that everything said in the pledge is entirely true. One student even described the pledge as an “empty promise” and said they “[don’t] see any meaning in it.”

The line “under God” is an example of a phrase that students believe to be disputable. One student reasoned that “our country technically has no one God,” which makes the “under God” phrase non-inclusive since America has freedom of religion.

The line “With liberty and justice for all” is another phrase that some find problematic. The same student said that “at this moment, in America, I don’t think there is ‘[liberty] and justice for all,’ and so it wouldn’t be fair for me to stand when other people aren’t getting the equal rights they deserve.”

Even though some people have decided to remain seated during the pledge, there are still many who continue to stand. A lot of students stand for the pledge because they have been taught, from an early age, that it is a symbol for respect.

Some are more passionate about their stance and strongly believe that “standing and reciting the pledge is a respectful thing to do.” Many of those who do remain standing during the Pledge of Allegiance do so out of respect for their country and the veterans who have fought for America.

One student said, “I love my country, and, therefore, I stand with it and honor it.” They continue by saying, “I think of it [as] a promise to love my country and as a way of showing my thanks to those who defend it.”

Even those who stand have differing opinions about those who remain seated. Two students believe that it is disrespectful to America and its soldiers. Another believes that sitting does not cause any harm. All three, however, believe that it is acceptable to sit since people have the right to their own opinions.

One of MHS’s foreign exchange students this year gave their input on the Pledge of Allegiance. When asked about their thoughts on the pledge, the response was a quick and precise answer: “I love the way it creates unity, and it is interesting to have all the people pledging to the flag… with a lot of respect for the American flag.” This student believes that nobody should be forced to stand up, but “it’s a nice initiative.”

Even though the country from which this student comes does not have anything similar to the American pledge, the student said most do not find it weird or strange; they said, “You’re not weird, you’re American… We’re just different cultures.” Although it might seem strange at first, other people notice and respect how much pride Americans have in their country and in their flag.

Whichever decision is made regarding standing for the pledge or not, each person has the right to their own opinions. In most states, schools must excuse students who do not choose to stand and recite the pledge, whether it be for political, religious, or personal reasons. Therefore, schools cannot punish students for choosing to stay seated. Those who choose to remain seated and those who choose to stand should not be judged by the other party for their decision.

Although both sitting and standing is a powerful message, it means nothing unless people understand the reasoning behind it. According to Mr. Daniel Urban, “If you are boycotting the pledge, you need to share your reason so others can get behind you and your cause. Without voicing your reason, no one will know your cause.” Both outlooks have equally good points, but the decision to sit or stand remains one’s own.