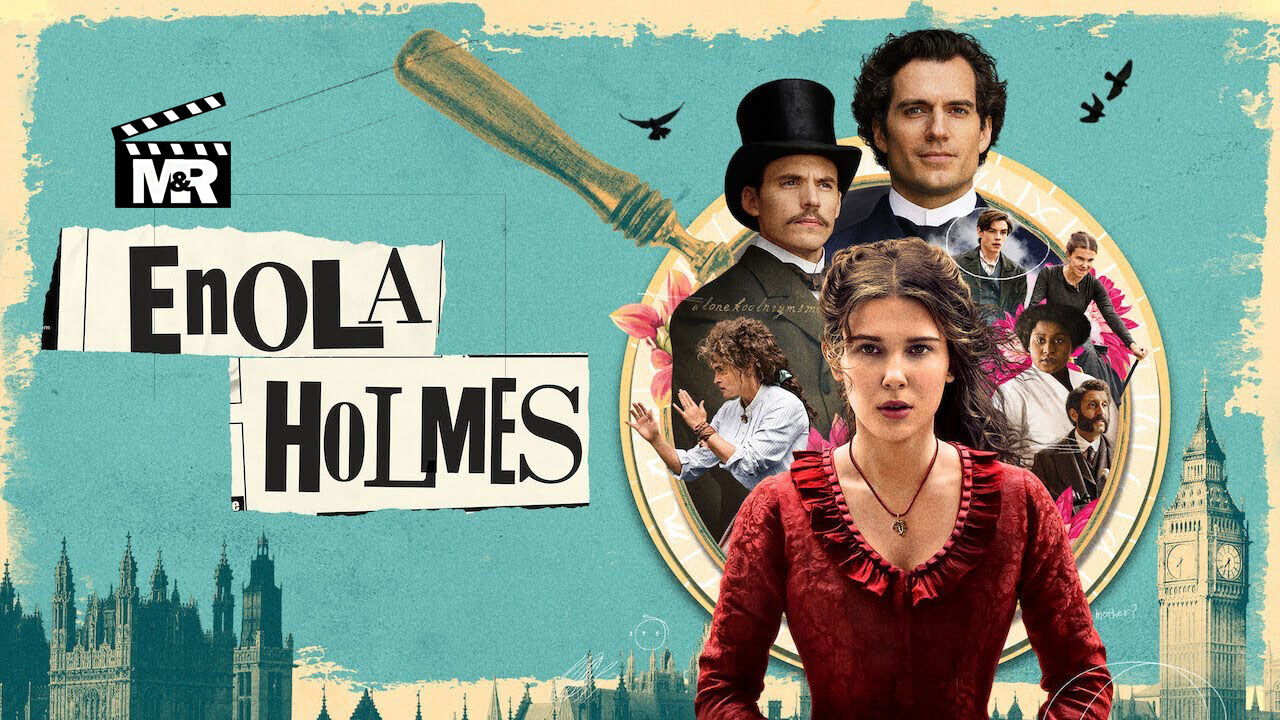 Welcome fellow movie lovers! This is Maggie Coffey and Reilly Gaunt, and we happen to love movies. We have watched all sorts of films, ranging from silent movies to classic Disney movies to the latest Marvel Cinematic Universe films, and plan to continue to feed our hunger for film. We want to share our passions and opinions with you and wish to guide you through all things movie-related in our Movie Reviews, Rankings, and Recommendations series.

For the first title in our series, we will review the new Netflix Original Film, Enola Holmes, starring Millie Bobby Brown, Henry Cavill, and Sam Claflin. The film is loosely based around Arthur Conan Doyle’s Sherlock Holmes universe.

Released on September 23rd, 2020, the movie follows Enola (Brown), the unknown sister of Sherlock (Cavill) and Mycroft (Claflin) searching for her lost mother with whom Enola has a very special connection. Along the way, she meets a strange boy with his own problems, uncovers mysterious facts about her mother’s secret life, and attempts to outsmart and outmaneuver her brothers.

The movie had beautiful scenery and costumes, even if somewhat historically inaccurate. The majority of the actors did a wonderful job, the story flowed well – weaving between storylines with ease – and the mystery was fun to follow. The musical score meshed well with the action on screen and did not distract from the story. The movie is bursting with ideas of femininity in a changing society and brings attention to issues still being faced in America today.

Some downsides to the movie include some jarring fourth wall breaks, some obvious plot twists, and a cliqued romance. The character of Enola often looked directly at the camera which took you out of the movie and took away some of its magic. Certain plot points are left unresolved, possibly leaving room for a sequel.

Should you watch this movie? Well, it depends. We both watched the movie and had conflicting opinions about it. One of us thought it was a cute pick me up, feel-good movie, especially for young girls and women, while the other thought it was too obvious.

If you would just like to sit down and watch something that is cute and not too deep with an air of mystery, then this would be a great movie for you. Although the movie was centered around a mystery, it felt more like an adventure at times. The action sequences were not too “in your face,” and the simpler scenes were not too plain.

However, if you are an avid lover of mystery films, this might not be the best movie for you. The clues in this movie are not exactly inconspicuous, and the big plot twists are quite evident if you pay attention.

This movie would not be the best introduction to the characters of Sherlock Holmes, as certain characters do not fit the classic Sherlock Holmes story. In addition, Sherlock does not get very much screen time since the movie primarily focuses on Enola and a potential love interest.

Overall, we both thought the movie was good, but it may not be suitable for everyone. It does not follow the conventional way of movie storytelling. The acting and filmography were very well put together, and although the fourth wall breaks were jarring, some people may be able to overlook them. The movie provides a unique outlook into the well-known universe of Sherlock Holmes.

Remember, this review is only the opinions of two people. You may have already seen the movie and thought differently than we did. If you would like to share your opinion, please leave them in the comments below.