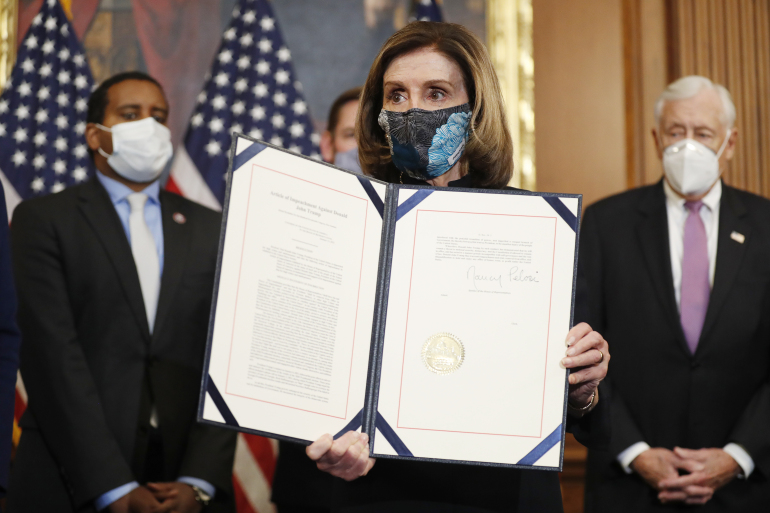 Making History, One Impeachment at a Time

On January 14th, history was made, but not in a good way. For the first time in the history of the United States, a president has been impeached twice. Congress leveled the charges against President Donald Trump for the second time in office, this time on the Incitement of Insurrection after the storming of the Capitol Building on January 6th.

When Trump Supporters stormed the Capitol Building, there were two questions in the mind of most lawmakers as they were being forced into lockdown: How could this happen, and why? Already, many of the Trump Supporters involved in the storming have been arrested, and there are even murmurings of sedition charges being brought up against them. With that in mind, the eyes of the country began to turn to President Trump.

Some accuse Trump of provoking the attack on the Capitol Building. At a rally earlier that day, he encouraged supporters to “[march] over to the Capitol building to peacefully and patriotically make [their] voices heard today.” While Trump clearly said to “peacefully” march over, just before Rudy Guliani, Trump’s lawyer, took the stage, Guliani called for a “trial by combat” against the Democrats. This led others to read between the lines of Trump’s words and deduct that perhaps he was not calling for a peaceful protest as he had previously stated.

As rioters stormed the Capitol, Trump did little to condone them. He posted a video on Twitter asking for support of Capitol Law Enforcement. Soon after, he tweeted “These are the things and events that happen when a sacred landslide election victory is so unceremoniously and viciously stripped away from great patriots who have been badly & unfairly treated for so long. Go home with love and in peace. Remember this day forever,” which has been seen as Trump’s way of supporting the rioters. Trump also said in a video posted to twitter “We love you, you are very special,” before encouraging rioters to leave.

As Congress was forced into lockdown, murmurs of impeachment had already begun. Many of the politicians had been following the rally and already knew what Trump and Guliani had said.

Early in the morning, on January 7th, Rep. Illhan Omar began drafting Articles of Impeachment against Donald Trump. A multitude of other Representatives supported these articles, including Rep. Al Green and Cori Bush.

The articles called out Trump’s actions by saying, “Every day that he remains in the office of the presidency—overseeing the United States military and nuclear arsenal—is a day the safety of the American people and the world are threatened.”

Article I of the Impeachment cites his conversation with Georgia Secretary of State Brad Raffensperger, in which Trump asked Raffensperger if there was any possibility of overturning the election results in Georgia. The article states that Trump “misused the power of his office by threatening an elected official with unspecified consequences if he failed to pursue the President’s false claims and attempting to coerce an elected official to commit fraud.”

Article II cites his encouragement of the storming of the Capitol. The article states that “Donald John Trump has abused the powers of the Presidency to incite violence and orchestrate an attempted coup against our country.” It goes on to state that, “In all of this, Donald John Trump has acted in a manner contrary to his trust as President and subversive of constitutional government, to the great prejudice of the cause of law and justice and to the manifest injury of the people of the United States.”

The articles contain largely the same content as Omar’s articles, the only difference being that Cicilline’s articles of impeachment lacked an article regarding the phone call between Trump and Raffensperger. Instead, the phone call was simply used as evidence to support Incitement of Insurrection: “Those prior efforts included a phone call on January 2, 2021, during which President Trump urged the secretary of state of Georgia, Brad Raffensperger, to “find” enough votes to overturn the Georgia Presidential election…”

Cicilline’s articles gained more traction, with more than 110 House of Representative colleagues signing on to the article within the course of 12 hours. By January 10th, that number had grown to 210.

With the sheer amount of support Cicilline’s articles received, it was only a matter of time before they would appear before the House.

On January 11th, the Articles of Impeachment were introduced into the House of Representatives. With the Democrats holding the majority, it was obvious that the bill would pass, but it was simply a matter of when. After some debate between parties, on January 13th, the bill was passed. In an unusual turn of events, ten Republicans broke rank and voted in favor of the articles of impeachment.

Now, the fate of the articles rests in the Senate. However, with Trump’s term ending soon and the Senate being on break until January 19th, Mitch McConnell has said that there is not enough time for the Senate to hold a proper trial during the remainder of Trump’s term, instead saying that the trial will proceed after Trump has left office. House Majority Whip Jim Clyburn has said that the House will not send the articles of impeachment within Biden’s first 100 days.

Clyburn stated that Biden needs 100 days to get everything underway; this includes electing cabinet officials and passing another COVID-19 relief package. An impeachment trial in the Senate would greatly hinder either of these from happening in an effective time frame.

For now, things will remain at a standstill. Mitch McConnell is still undecided on voting to convict Trump, and his vote will determine the vote of many other Republicans in the Senate. Until the Senate reconvenes for anything other than a pro forma session, the fate of President Trump’s impeachment will remain unknown.

This article will be updated as news breaks.

Link to Articles of Impeachment: