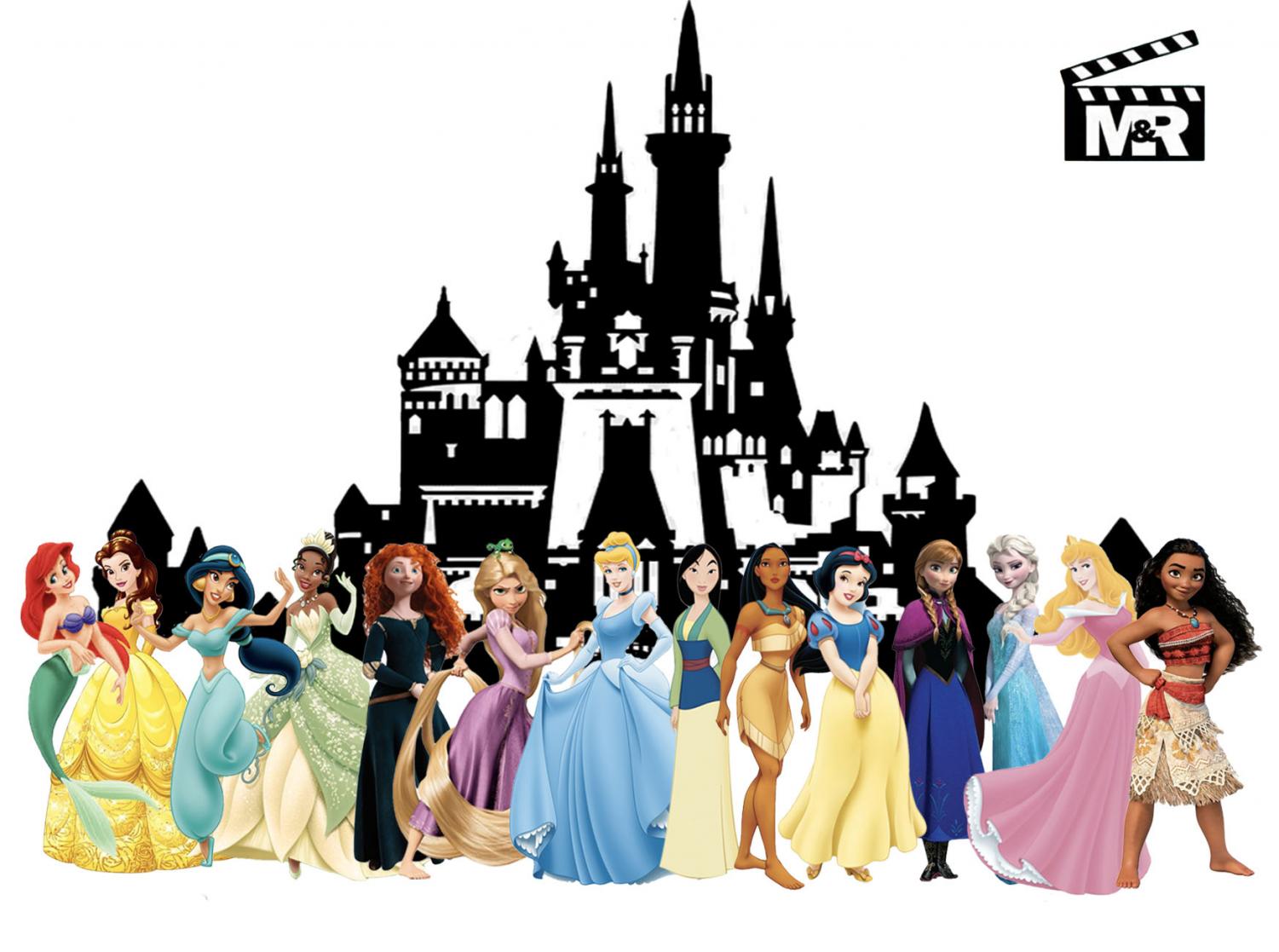 All current Disney Princesses in front of Disney castle

Welcome to (or back to) our column, movie lovers. We are Reilly Gaunt and Maggie Coffey, and we’re going to be your guides to all things movies. There are dozens of Disney movies, and each of them are spectacular in their own right. Today, we will be ranking all the animated Disney Princess films. Many of these movies have sequels, but we will just be including the original films. These rankings are based on our opinions of the movies, not our opinions on the princesses themselves. We don’t think there is a single bad Disney Princess movie, but there are some that are superior to others.

This is the first Disney Princess movie to actually have any character development for the prince, and he was even given a name! Sleeping Beauty really goes well with her name, as she sleeps through the majority of the movie, therefore putting all the action on the prince, the fairies, and the villain. Although Aurora herself is sleeping throughout most of the movie, she still has a nice personality from what little part of her the audience experienced. Maleficent is an amazing villain who many people adore to this day, she managed to even have her own live-action movie series created for her. This movie is not the most exciting Disney Princess movie in our opinion, but it is visually stunning and has a well-developed cast of characters.

This movie is powerful, and it has several really meaningful messages. Pocahontas is a strong female character, but the historical deviances have upset many. For the sake of ranking, we have decided to do our best to treat the Pocahontas movie as its own story and disregard the historical people on which it is based. All of the songs in this movie are spectacular and the visuals supplementing these songs are very unique and breathtaking. All the animal sidekicks are adorable. Even though it is near the bottom of our list, we both think it’s a pretty good movie overall, but unfortunately, it is just a very problematic story and topic.

This movie is about the typical princess that doesn’t want to be a princess, but with a major twist. Due to her reservations, she gets into some trouble and needs to save the day on her own. It shows the growth of the relationship between a mother and daughter. Despite the stereotypical “I don’t want to get married” storyline, this movie is unique in its own way.  Geared towards mothers and daughters, this film showcases familial growth. Merida is certainly a less “girly” Disney princess, but she still is a role model for young girls out there. She really matures throughout the movie and learns from mistakes, including hers and ancient mistakes from the past.

This is the movie that started it all. Everyone thought Walt Disney was crazy when he wanted to produce a full-length animated film, but Disney did it anyway and it turned out to be a hit. Snow White may not be the most heroic Disney Princess, but she does seem to have the kindest heart. The movie also manages to teach children lessons such as avoiding taking food from strangers.  The backgrounds are all beautiful and breathtaking. The Evil Queen’s dungeon/lair was undeniably creepy and the dwarves cottage makes you want to go live in the forest. The success of this classic film set the stage for all of the amazing Disney Princess movies that followed.

The Princess and the Frog has an excellent villain, some fantastic songs, and outstanding characters. Tiana has the most costume changes out of all the Disney Princesses, and although most of her outfits aren’t sparkly ball gowns and such, they each fit Tiana’s personality perfectly. Ray and Louis, despite being a firefly and alligator respectively are both amazing, unique characters and would do anything to help their newfound friends. This movie is fun and wholesome, but just does not quite have the same luster as the others.

Even as we near the lower half of our list, the movies are still good. As the most recent Disney Princess movie, along with being the first to follow Frozen, Moana had a lot on its shoulders. Despite all of the pressure, Disney paid off and made a wonderful and original new film. Moana has an outstanding soundtrack and scenery like no other film before it. Moana ranks lower on our list because it does not feel like as much of a “Disney Princess” film, as an action/adventure film. The different feel is not necessarily a bad thing though, as it can inspire young girls to take life into their own hands. A few shortcomings of the movie include a lack of a clear main villain, some plot convenience, and some clear characters made for cash grabs. The cute animals that had little to no impact on the overall story seemed to only serve the purpose of selling stuffed figures to children.  Despite its issues, Moana is a great film and a step toward a more inclusive future for Disney.

This movie isn’t technically registered as a Disney Princess movie, but we felt that we just had to include it. Even though the songs are played constantly and get stuck in everyone’s head, everybody has to agree that they are incredible. This was everyone’s favorite movie and, consequently, people grew tired of it. Still, it is hard to deny that this movie is a wonder of animation, humor, and freedom. Every little girl wanted to be Elsa or Anna which shifted the nation. Although Frozen is not necessarily the best, it cannot be ignored as it brought on a worldwide craze for Disney. For this reason, Frozen holds our number six spot.

Cinderella may not be the most interesting Disney princess, but her story is absolutely the most memorable and iconic. We’re sure every little girl dreamed of having a fairy godmother, going to a ball, and meeting their Prince Charming. Although there aren’t very many memorable songs, the story stands on its own as a classic. As a character, Cinderella is very kind, almost too kind, as she allows her stepmother and stepsisters to walk all over her. In addition, her little mouse friends, though helpful, have extremely high-pitched, annoying voices that are not the most pleasant to hear. There were also long, overly drawn-out interactions between the mice and the cat that are simply not necessary. Although a few scenes may be necessary, Cinderella is a magical movie that really brought the fairy tale genre to life.

Ariel, as a character, can be relatable to any teenager or child who is annoyed at their parents or just wants to express themselves. The underwater setting is enticing and the characters are colorful and fun to watch. The Little Mermaid has one of the best soundtracks with cult classics, such as “Part of Your World,” “Under the Sea,” “Poor Unfortunate Souls,” and “Kiss the Girl” with which everyone loves to sing along. This movie captures the wishes and wants of people looking for something different and pulls it off spectacularly. Ariel’s influence and the waves The Little Mermaid created place her as number four on this list.

Some people might claim that Mulan is not a Disney Princess because she is not royalty, but Disney loved her so much they added a new criteria to become an official Disney Princess: an act of heroism. Most everyone can agree that Mulan is hands-down the most heroic of all the Princesses, as she saved her entire country! This movie reinvented what defines a Disney Princess and is arguably one of the most realistic and heart wrenching of them all. With its incredible characters, songs, and action sequences, Mulan lands in our number three spot.

As the princess of Corona and the queen of quarantine, Rapunzel has definitely become more relatable over this past year. Aside from that, Tangled is a wonderful movie in all parts. The music is catchy, the scenery is gorgeous, the villain is perfectly evil, and the love interest is pretty much the ideal man. Tangled exceeds the classic “man rescues woman” trope and takes an exciting spin on the classic “Rapunzel” story. We have this movie ranked as number two because of its fun storytelling and rewatchability!

This movie is nearly perfect. Every single song, even the reprises, are exceptional. Some people may claim that Belle developed Stockholm Syndrome, but we see it as a true love story between Belle and the Beast – whose change in character became obvious throughout the film. Gaston’s narcissistic tendencies make him a different and more interesting type of villain for the audience to muse over. Really, each character in the movie has their own fun personality – not a dry one in the bunch of them. Belle certainly lives up to her name, as we both believe she is the prettiest Disney princess. She is an adventurous, kind, and intelligent character, who does not take “no” for an answer. She is by no way a tomboy and finds her own feminine way to be brave. Nominated for seven awards, Beauty and the Beast was the first animated movie to be nominated for Best Picture. All of these points and more lead to Beauty and the Beast to the very top of our ranking.

We had conflicting opinions regarding Aladdin. One of us wanted to put it in the top five and the over would rank it in the lower five. Our opinions on this matter were so strong that we decided to put in a different article altogether.

Growing up, Disney Princess movies were a really big part of both parts of our lives. While Maggie prefers the classical Disney princesses, Reilly enjoys some of the more modern ones. Despite this, we were able to work together and compile a combined list of what we believe to be the top and bottom of the batch. In our opinion, all the Disney Princess movies are wonderful, but some are just easier to rewatch than others.