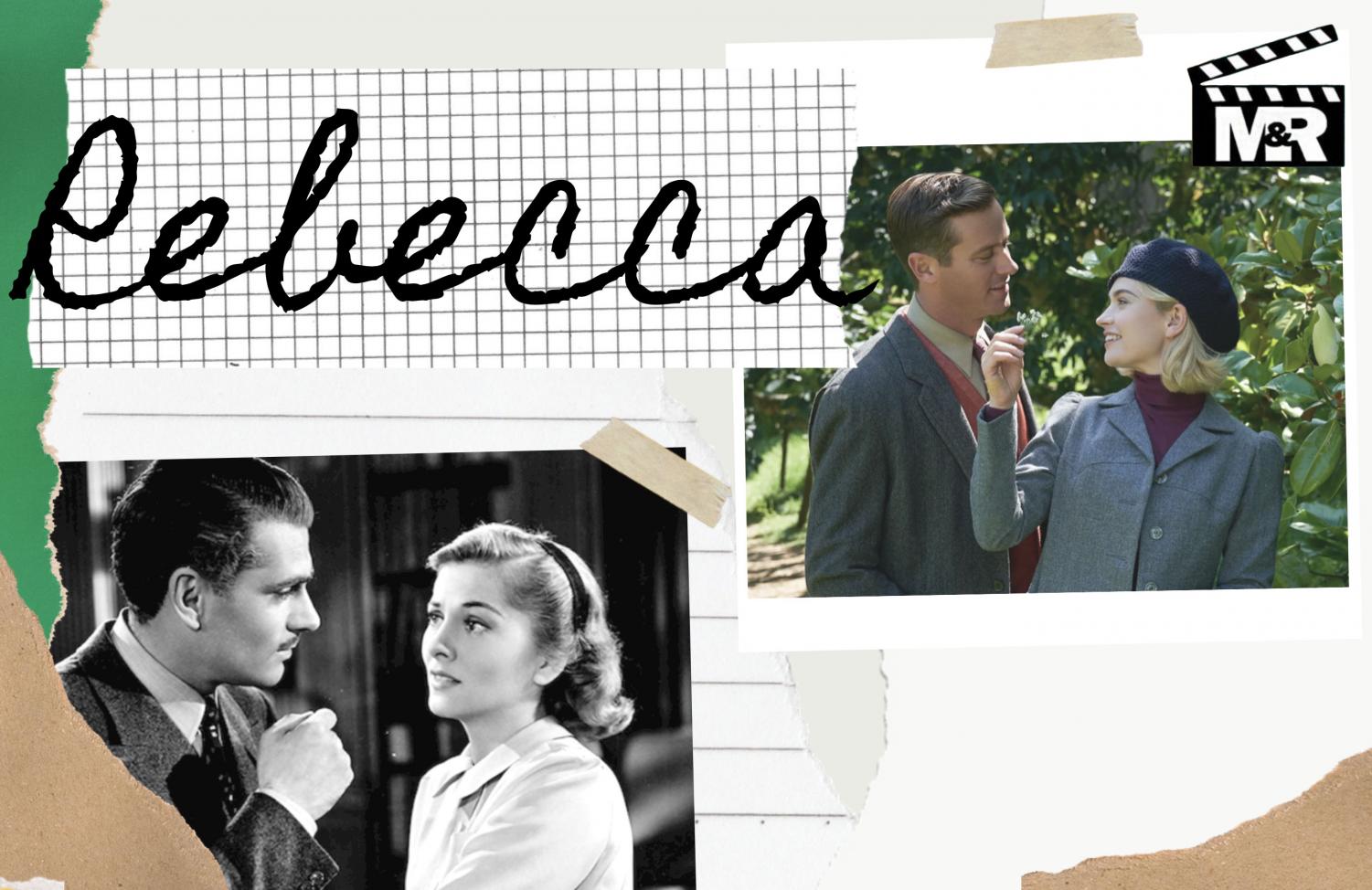 Welcome to (or back to) our column, fellow movie enthusiasts! Today, we are reviewing not one but two movies, Rebecca (1940) and Rebecca (2020). These two films are based on a book, but since neither of us have read this book, we are only comparing the movies to each other. These movies came out 80 years apart, and it really shows. This review/comparison is spoiler-free.

Both movies are based on the 1938 book, Rebecca, by Dame Daphne du Maurier. The story follows a young girl who meets a rich widower, Maxim de Winter, while on vacation. The two quickly fall in love during the duration of their time together. Upon their marriage, Max brings his new wife to Mandarly, his large estate. Obviously out of place, Maxim’s new bride must live in the constant shadow of his late wife, Rebecca. The stress of such a position is worsened further by Mrs. Danvers who constantly made her feel out of place. When the ghost of Rebecca makes a reappearance, Max and his bride must deal with their happiness in jeopardy.

There is one aspect of Rebecca that makes it even more mysterious. The main character of the film is not given a name. While Rebecca’s name and initials make constant appearances throughout the film, the first name of the second Mrs. de Winter is never mentioned. Both movies took advantage of this fact, but with drastically different outcomes. The first movie keeps it more subtle, while in the remake, it is more obvious. Because this may cause some confusion, the second Mrs. de Winter or just Mrs. de Winter will be referring to the Joan Fontaine/Lily James character and the first Mrs. de Winters will refer to Rebecca. The “first” and “second” are not used to refer to the 1940 and 2020 versions.

The original movie is exactly what you would expect from the infamous “Master of Suspense.” Every single moment of the film is filled with drama and the air is thick with intrigue. The characters are developed beautifully and Hitchcock used every single actor to their full potential and truly brought the story to life. There are several breathtaking and expertly calculated shots that bring chills to the audience.

The original Rebecca is undeniably better than the remake. Despite being a few minutes longer and having the traditional preceding credits, the original movie is told in a way that makes the viewer unable to take their eyes away from the screen. There are several uninteresting moments in the remake that honestly make it hard to get through the entire movie in one sitting. The remake is more easily accessible, but both of us would rather rewatch the original. The remake featured several things that completely took away from the eerie story, such as oddly placed music, some hideous costume choices, and unnecessary fancy editing.

Many of the characters were also changed drastically, and that change was definitely not for the better. In the first movie, the two main characters had extreme anxiety, which made the audience sympathize with them. In the original film, Max had a much more likable personality, while in the second, he just seemed cruel the entire time. A lot of the characters were made to be much ruder and forward to make up for the stronger personality of the second Mrs. de Winter.

There was also a chilling moment in the original where the second Mrs. de Winters comes out of her shell that made the two of us proud to be watching her. The remake made her too bold and this boldness caused her to do some aggravating things that annoyed the both of us. All of the characters in the remake were poorly developed and just seemed too blunt, except for Mrs. Danvers, whose lack of bluntness and sternness definitely made her character less compelling than the original.

The absolutely chilling character of Mrs. Danvers spooked us so much that we just had to devote two paragraphs to comparing her character. The story of Rebecca is driven by this undeniably sinister character. The original Mrs. Danvers remained completely and eerily stoic the entire time, which made her macabre and nightmarish. She delivered every single one of her coercing lines with an uncanny monotonous voice that echoes in your ears and sends shivers down the spine. Every single interaction with the second Mrs. de Winter makes the viewer come to realize how evil Mrs. Danvers truly is.

In the original, Mrs. Danvers’ animosity towards the second Mrs. de Winter was motivated by a hinted romantic attraction to Rebecca while her feelings for Rebecca seemed more familial in the remake. The new version of Mrs. Danvers, although seemingly sinister, relied too much on jump scares and her character design and wardrobe did not do her any favors. This Danvers was pretty subpar, especially in comparison to Judith Anderson’s performance.

In several interviews, director Ben Wheatley made comments saying that the main focus of the story of Rebecca is the love between Mr. de Winter and the second Mrs. de Winter. In an interview with Rolling Stone, he says “The love affair between the two main characters is the fuel that powers the whole film.” Contrary to this statement, the two characters engaged in said “love affair” do not seem to have much chemistry. Their romance in the beginning is nowhere near as charming as the original between Joan Fontaine and Laurence Olivier. Despite being shot in the 1940s, when there were some restrictions on intimacy scenes in movies, the chemistry between the original two actors transcended the need for intimate scenes.

The time differences between the two movies shows, both in costume and general storytelling. The original movie featured tense, dramatic monologues that drew the audience in, while the second one depended on long, sweeping shots of the landscape and choppy editing to keep it interesting. Every shot in the original had a purpose and there was no need for any aesthetic shots. The original design of Mandarly and the cliffside cottage was beautiful, while the remake made it seem like something out of a Clue or pirate movie. The addition of the servants quarters made Mrs. de Winter seem less isolated as some of the servants were more prominently featured.

The difference in costumes was also quite apparent. In the first movie, everyone seemed crisp and polished. Even Mrs. de Winter, who was supposed to have a slightly mousy look, was well put together. In the second movie, there were some questionable color choices, such as a certain mustard colored suit. In the original, the most important dress, despite being in black and white, was so much more elegant and classy than the dress used in the remake. Lily James, although very beautiful, looked less than appealing in this movie. The hairstyle chosen for her did not complement any of her features and did not look time period appropriate. Joan Fontaine looked like an innocent deer caught in headlights while Lily James looked like a confused, struggling fish gasping for air. If it weren’t for the cars, I don’t think either of us would have known in which decade the remake was set.

Even though it was in color, the 2020 version was less vivid than the 1940 version. The use of odd filters and shots of the setting, failed to add any real substance to the film. The lack of color in the original added to the mystery and supplemented the macabre atmosphere.

In the first movie, the character of Rebecca is never shown, but in the remake she is unceremoniously placed in several dream sequences and makes an appearance as a drowned corpse. The aforementioned dream sequences are out of place and are shot in a way that makes them seem like a discombobulated fun house.

The climax of both movies culminated into a trial, but this trial plays out very differently. The original is made much more tense by the obvious anxious nature of the two main characters, while the remake is abrupt and confusing. The more apparent guilt leads to a lack of concern for the two leads and lessened the stake of the trial. The breakthrough in the trial is also ruined by Mrs. de Winters deciding to go off on her own and save the day.

In the past decade, there have been multitudes of less than satisfying remakes of classic beloved movies, which begs the question “Why would Netflix feel the need to remake perfection?” Literally, the 1940 Rebecca has a score of 100% on Rotten Tomatoes. Unfortunately, the statistics speak for themselves as the remake only scored a 40% on the website.

Whether the director likes it or not, any remake is obviously going to be compared to the preceding film before it. The story of Rebecca is an alluring one, but it is also complex and mysterious. Hitchcock was able to speak to the audience in a way that no one else could. The remake itself wasn’t the worst movie made, but compared to the original, it falls flat. The actors in the film are good looking and talented, but have no chemistry with each other. Their talents are squandered by the unfortunate writing and regrettable artistic liberties.

Although the same story is being told, the original just did it so much better. Hitchcock masterfully told the gothic story in a way that stood out like no other film. The original, which was literally released in times of war, was brilliantly put together with amazing performances from the entire cast, while the remake just seemed to be another lackluster, disappointing thing to come out of the year of 2020. Those are our very strong opinions regarding the classic 1940 Rebecca and its less than appealing 2020 remake. If you have seen either of these movies and have conflicting opinions, please let us know in the comment section.