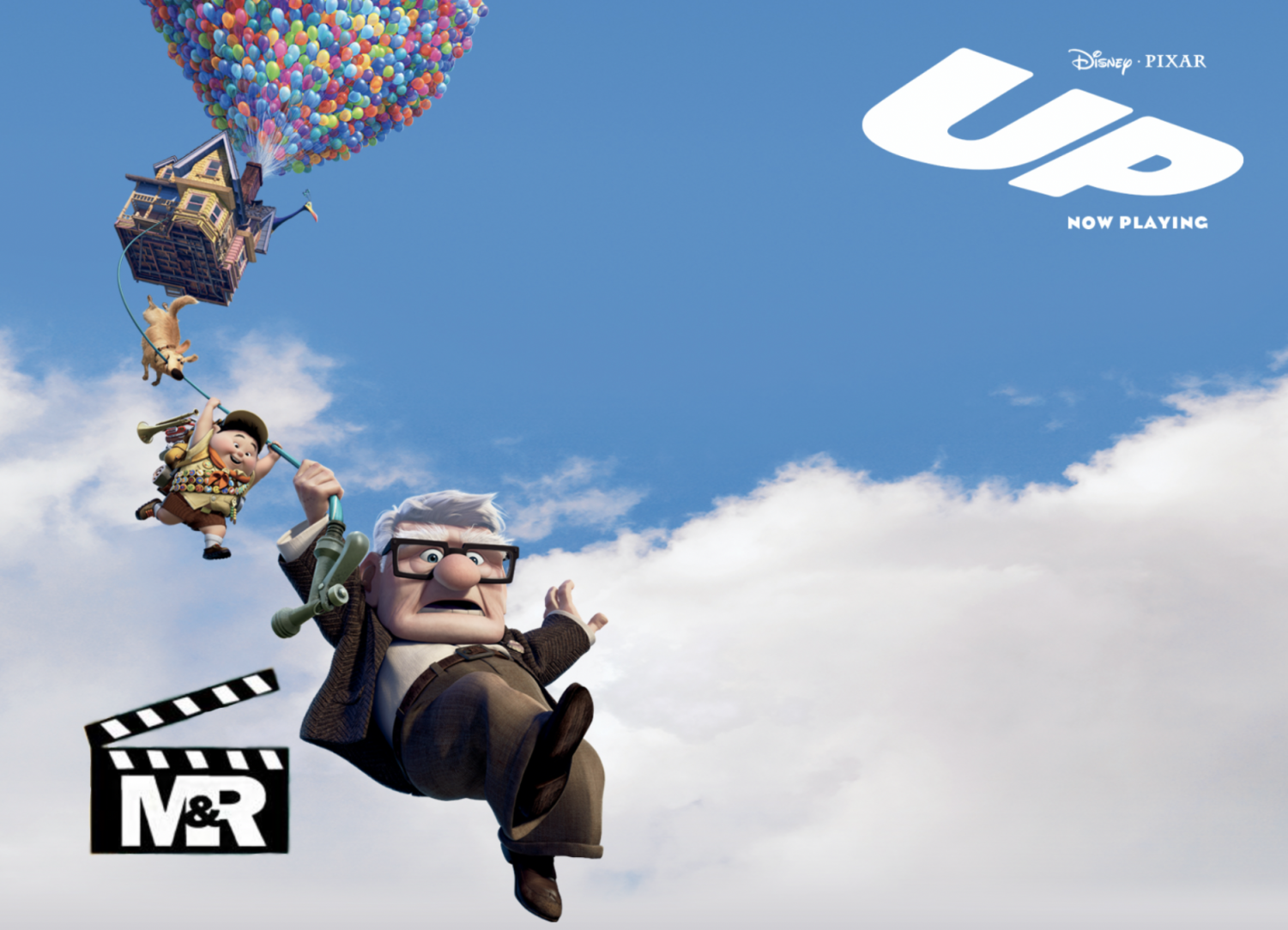 Hello fellow movie lovers! Welcome to (or back to) our column. Today, we are returning with another recommendation. There are many well loved Disney Pixar movies, but one really soars above the rest. Made in 2009, Disney Pixar’s Up is a cinematic masterpiece that we would recommend to almost anyone, no matter the age, gender, or taste in movies.

Up is a sweet and superb movie. Though this film is packed with humor, heartache, and hardships throughout the whole 96 minutes, almost everyone would agree that the first fifteen minutes are the most beautiful and heartbreaking of any other animated film’s beginning. The simple, yet classic music that goes along with this opening sequence really adds to the emotions the creators wanted the audience to feel.

Up revolves around an old, cranky man named Carl Fredricksen. To achieve his lifelong dream of traveling to a magical place called Paradise Falls, he takes to the sky in an exotic fashion: floating his house there by way of thousands of balloons. Unbeknownst to him, a young boy scout named Russell has accidently come along on the journey by stowing away on his front porch. With no way of turning back, Carl must let Russell tag along for the ride. The two manage to make their way to Venezuela, but run into a few difficulties along the way. Determined to get to the falls, the two refuse to give up. They trek along the cliffside and through the jungle together and meet a few friends and several foes along the way.

Carl’s negative, grumbly attitude perfectly contrasts with Rusle’s upbeat, friendly one. The two make an unlikely pair that appeals greatly to the viewer. It is because of Russell’s curious nature that the two manage to befriend Dug and Kevin while they trek toward the Falls.

Dug, who is a golden retriever, has the exact personality one would expect from a dog of that breed. Although he can be a little distracted at times, he is sweet, loving, and very loyal. The one thing one would not expect from a golden retriever is the ability to speak like a human. Dug certainly possesses this ability and uses it to his advantage throughout the film. Kevin, the colorful “snipe,” might seem like a hindrance at first, but becomes a very important plot point as the film continues.

Like most Disney Pixar movies, this film has a really powerful message. It displays for the viewer that the real adventure in life is not the places you go or the things you own or do, but the relationships you form. Carl, Russel, and Dug all form a family with each other and they find themselves content as long as they stay together.

Of the hundreds of animated movies out there, Up is definitely one of the best. It is both heartwarming and heart wrenching with plot twists nobody would ever see coming. Reilly and I would definitely recommend checking out this movie if you haven’t already.