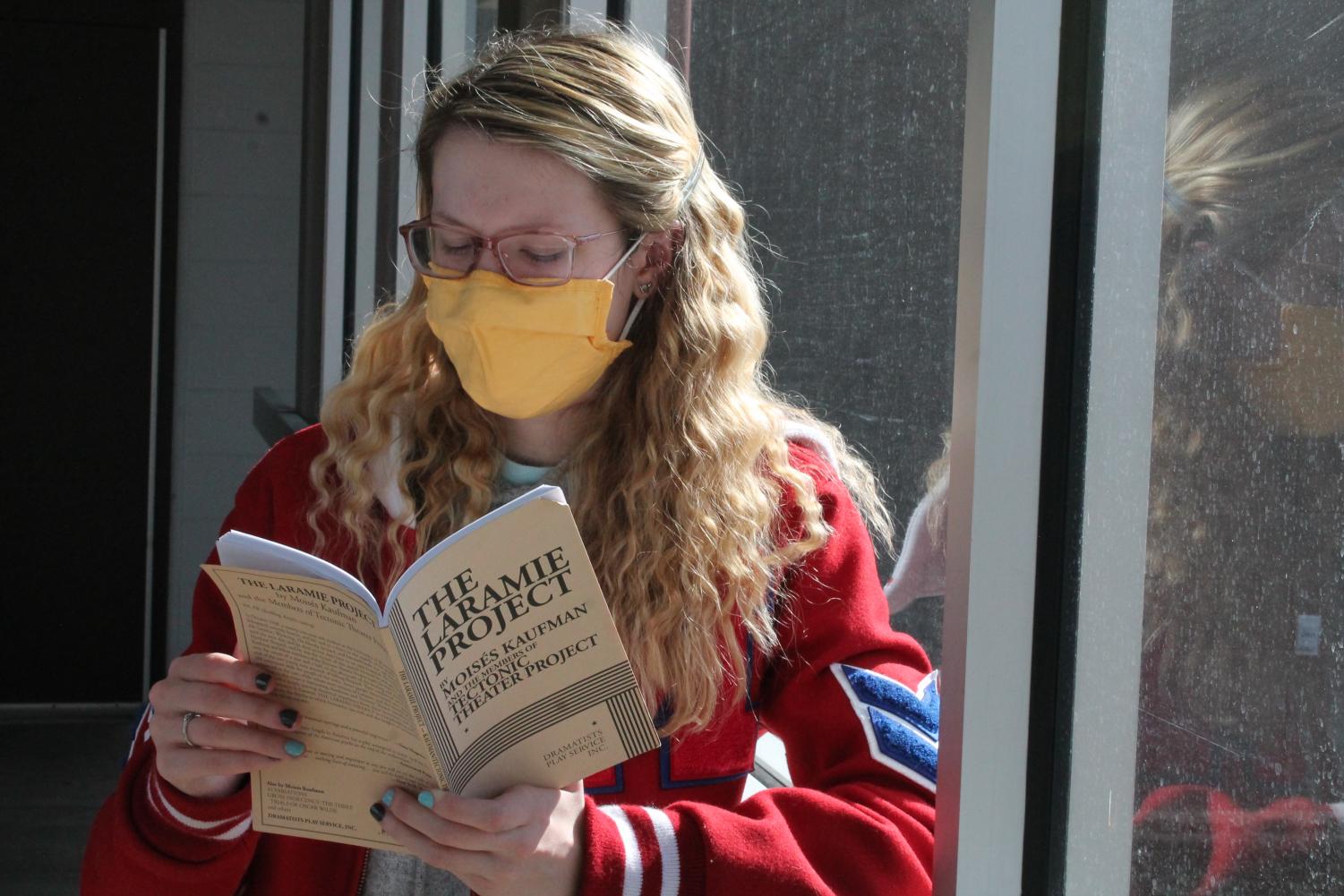 Reilly Gaunt studies her lines for the upcoming MHS production, The Laramie Project.

Every year, the Martinville drama club puts on three performances, but, like everything else, COVID has changed this. In the spring of 2020, the third performance of The Iliad, The Odyssey, and all of Greek Mythology in 99 Minutes or Less was canceled when the school shut down in March. This year, even though there have still been setbacks, the show must go on.

In October, Mr. Rick Armstrong, head of the MHS theatre department, announced to the drama club that their play this year would be The Laramie Project. He chose this play because “[he] was deeply aware of the strife and division in our country and we were looking at people having rights taken away and marginalization of several groups.”

The Laramie Project is about the aftermath of the death of a boy named Matthew Shephard, who was beaten to death for being gay. The entire play is a compilation of interviews from the people who lived in Laramie, Wyoming, at the time of the murder; all the dialogue in the script is verbatim.

Certain words from the play were censored by Mr. Armstrong, as he did not wish to give any derogatory words the power of being said. A few moments of profanity have also been removed to make the play more high school-friendly.

This show is unlike any other MHS has put on in the past and is not the most lighthearted play in the world. Some parents were unsure if they should allow their students to take part in the play due to the darker nature of the play. After reading through the script and discussing the reality behind the play, the cast managed to pull almost a dozen students.

Due to multiple COVID-related setbacks and reschedulings, the performance date is always up in the air. This has caused a little chaos amongst the castmates. Instead of one month of practice, they have had almost four, and they may have even more. Currently, the date is set for March fifth and sixth, with COVID, it is subject to change again.

There are eleven members in the cast of The Laramie Project, and, with each person playing multiple roles, over sixty characters in the whole play. Bringing each individual character to life is not easy for the cast. The fact that the characters are real also greatly impacts how the actors portray these people. Junior Elias Elsner said, “I think…if we were doing something fictional, [we’d] act more in a comical way…cartoonish, but, if you’re playing real people, you have to put some ‘oomph’ into it.” Another junior, Shelby Yount, said, “I think it’s just so incredibly important to realize that these are real people,” regarding the reality behind the dialogue.

The nonfiction aspect is not the only thing that is abnormal about this play. Because of COVID, Armstrong decided on a reader’s theatre type play. This means that all the actors are confined to an 8’ by 8’ square and will have their scripts on the stage with them as they perform.

Set crew only started construction a few weeks ago, and, with only two practices a week, it has been taking time to build the platforms for the performers. In addition, many of those from last year’s set crew have been unable to help out as much, because their jobs take up time that they used to put towards building sets.

COVID has caused quite a few difficulties for the play, but it is also one of the reasons it was able to be put on in the first place. Mr. Armstrong was able to plan ahead and convince the administration to allow the performance to continue. He predetermined the costumes, dates, seating, practices, and scenery to ensure that both the cast, crew, and audience would be as safe as possible during both the rehearsals and the performances. One of the reasons he considered this play was because of the reader’s theatre aspect.

Despite all of the obstacles, the cast of this play was able to connect and form a family with one another. Shelby Yount said, “They’re the people that I care about very deeply, and seeing them progress in all of this makes me happy for them…happy for the group, and happy for the future.”

This play is definitely a unique one, but, nevertheless, it is still theatre. According to Mr. Armstrong, “[He] wants the cast to walk away knowing that the job was well done, and the story was told with love, hope, and humility.” If everything goes as planned, it should be open to the public to see at the end of February. You should definitely check it out. However, depending on COVID, it may only be open to family members of the cast. If something does go awry, the show will still go on!

One Response to “The Laramie Project”