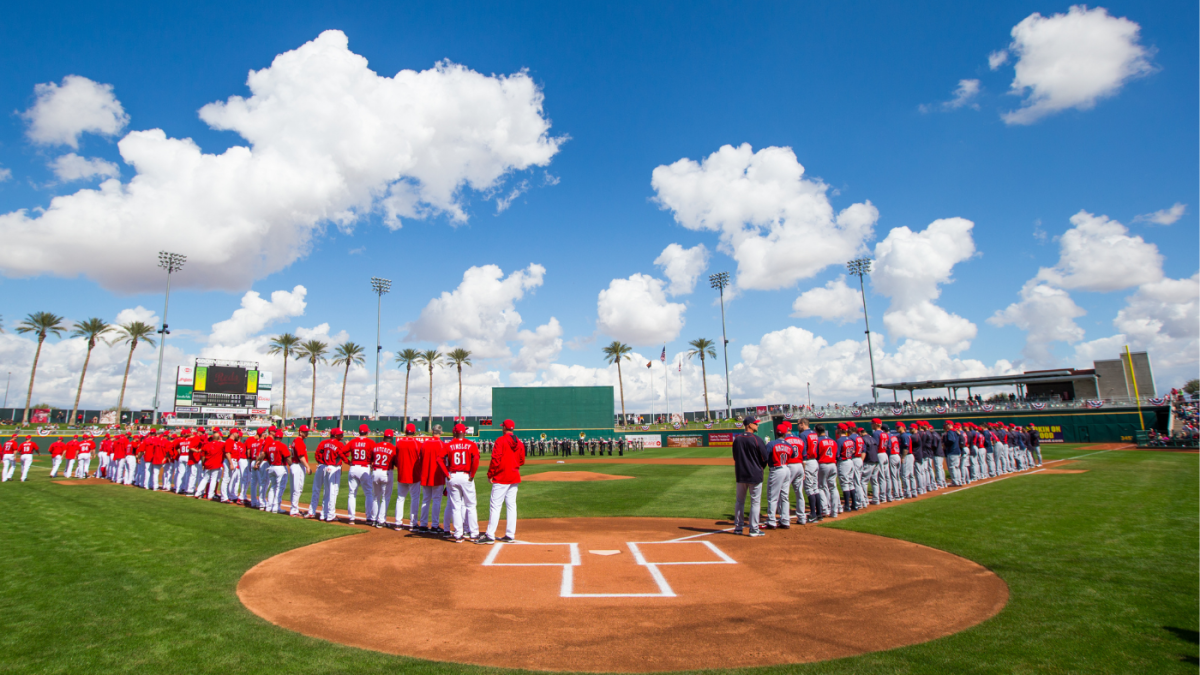 Players line up on the line to hear the national anthem being played before the game.

Players line up on the line to hear the national anthem being played before the game.

MLB Spring Training has kicked off in the southwest. We return to a seemingly normal season with the same game. Covid-19 effects on the season are limited as teams are staying in “bubbles” and being socially distanced with limited fans.

To recap last season the Los Angeles Dodgers won the world series. They played a hard-fought series against the Tampa Bay Rays. Other teams like the Atlanta Braves who won the NL East and the Houston Astros made deep playoff appearances also. These are some of the teams to look out for in the 2021 MLB season.

The Dodgers picked up the most popular free agent, Trevor Bauer this year. He adds to their tremendous pitching rotation and helps people favor them for back-to-back champions.

Fan-favorite teams for the 2021 season include the Dodgers, Padres, Rays, Blue Jays, and the White Sox.  The San Diego Padres have the youngest core in the MLB. With players such as Fernando Tatis Jr., Manny Machado, and the new star from Korea, Kim Ha-Seong.

The Rays, runners-up last season, pack a punch for such a low-paid team. Players such as  Randy Arozarena, Tyler Glasnow, and Brandon Lowe have a big role in this team.

The Toronto Blue Jays are the only MLB team in Canada. This team is unbelievable with the amount of young talent on it. These players also carry the load from past stars in the MLB. Bo Bichette, Vladimir Guerrero Jr., Lourdes Gurriel Jr., and Cavan Biggio are the future of this franchise and the future for their sons’ careers.

The Chicago White Sox are much like the Blue Jays with their immense young talent. The players that help lead the team are young fire-baller Garrett Crochet, one of the top hitters in the league Tim Anderson, and the reigning AL MVP Jose Abreu.

The new season brings some new changes for the minor league teams of the MLB. These changes include wider bases, new shift rules which must have all four infielders in the dirt of the infield, and automatic strike zones.

These new rules have caused a lot of controversies. The biggest is being able to steal first base. This has never happened, so it is unclear what will happen, and if players will even do this. The rule states that players may steal first base if the ball is a wild pitch on any count. This means that a hitter could be on a 0-0 count and get a wild pitch, leading to first base being stolen. However, the runner does not have to run to first at all and may choose to stay and hit.

Breakout players through the first few games include Joc Pederson and Jacob Degrom. Pederson, the new left fielder for the Chicago Cubs, is leading the league in RBIs and runs. He is also tied for the most home runs in the league. This is a huge booster for the Cubs because they did not sign their big hitter Kyle Schwarber this offseason.

Degrom has been a star player in the past. To no surprise, in his first start, he was lights out throwing 10 strikeouts, and his fastball was touching 102 miles per hour. This is an incredible feat and it is safe to say he will have another amazing season.

Players and coaches will continue to be safe and distanced with the pandemic around. This means fans returning to MLB stadiums. We are very hopeful for a more normal season. We can expect the hot dogs, burgers with fries, Coca-Cola’s, and mini helmet ice creams.