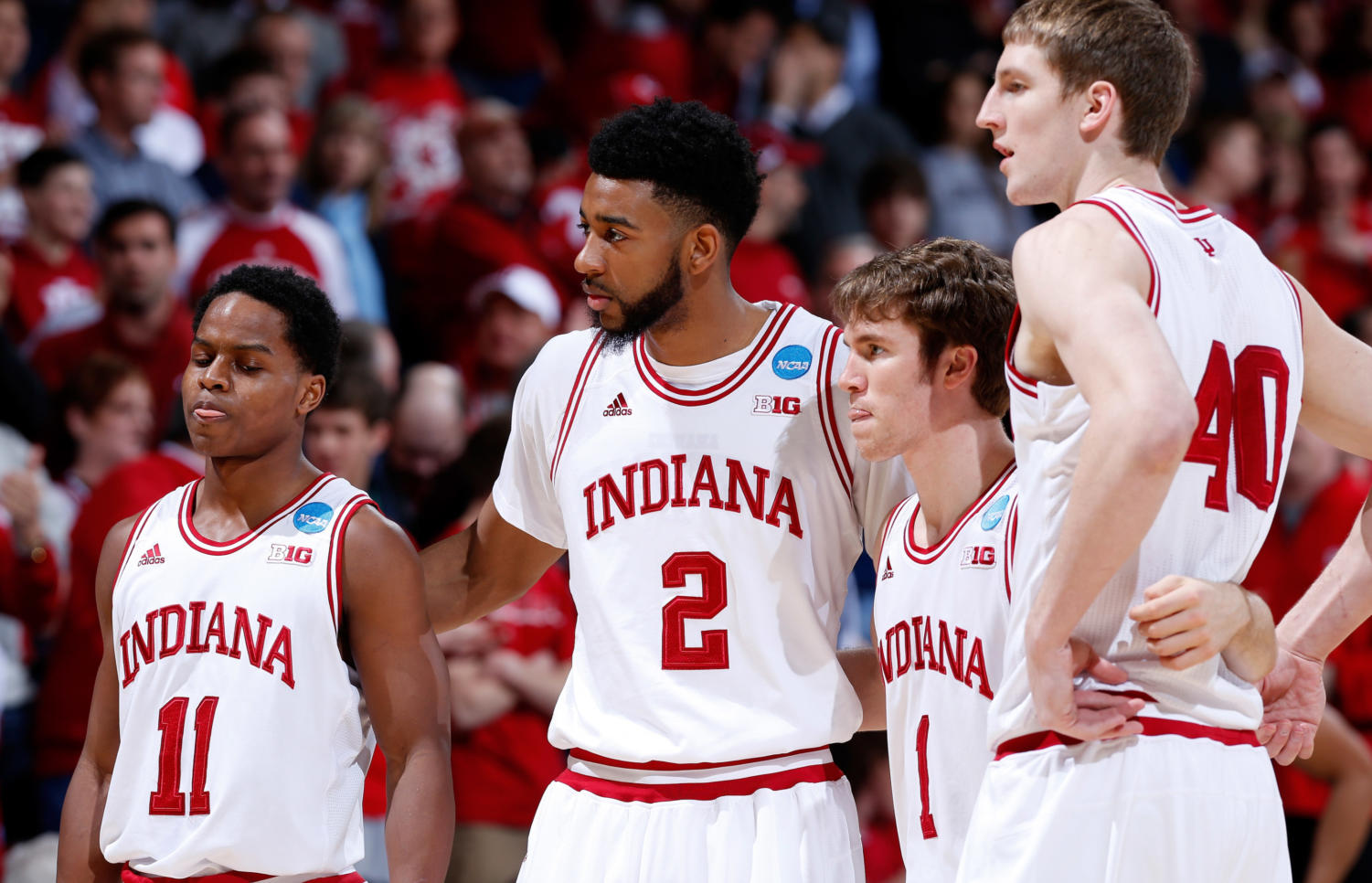 DAYTON, OH – MARCH 22: Yogi Ferrell #11, Christian Watford #2, Jordan Hulls #1 and Cody Zeller #40 of the Indiana Hoosiers look on early in the game against the James Madison Dukes during the second round of the 2013 NCAA Men’s Basketball Tournament at UD Arena on March 22, 2013 in Dayton, Ohio. (Photo by Joe Robbins/Getty Images) (Getty Images)

DAYTON, OH – MARCH 22: Yogi Ferrell #11, Christian Watford #2, Jordan Hulls #1 and Cody Zeller #40 of the Indiana Hoosiers look on early in the game against the James Madison Dukes during the second round of the 2013 NCAA Men’s Basketball Tournament at UD Arena on March 22, 2013 in Dayton, Ohio. (Photo by Joe Robbins/Getty Images)

When Archie Miller took over at IU in 2017, many fans of the team were elated. With the success that Miller had coaching the Dayton Flyers, leading them to multiple deep NCAA Tournament runs, it seemed almost certain that the Hoosiers would be back in the national spotlight once again. But throughout four long, torturous seasons in Bloomington, the only spotlight that had been shone on the Indiana Hoosiers men’s basketball team was one of disappointment.

Through four seasons under Miller, the Hoosiers compiled a combined record of 67-58. Although they were above .500 in terms of winning percentage, it was still a major letdown from what was expected when Miller came in.

His first season, finishing with a 16-15 record can be pointed to the fact he was inheriting a different coach’s team. A team that he had yet to form a real relationship with and thus was not yet built for the Big Ten conference.

The 2018-19 season was frustrating to say the least. In his first recruiting class, Miller was able to bring in highly talented players such as Jake Forrester, Damezi Anderson, Rob Phinisee, Jerome Hunter, and graduate transfer Evan Fitzner, but his prized recruit of that class was undoubtedly Romeo Langford.

Langford was ranked as the top shooting guard in the country and the 5th best player overall. This team had Hoosier fans expecting an NCAA Tournament bid, but all that resulted was a lackluster 19-16 record and a third-round exit in the NIT Tournament. As of today,  Rob Phinisee and Jerome Hunter are the only two players who remain at IU from that recruiting class.

The 2019-20 season was also one that ended in disappointment. After landing the commitments of in-state phenoms Trayce Jackson-Davis and Armaan Franklin, the Hoosiers would actually go on to have a good season and finish with a 20-12 record, defeating Nebraska in the first round of the Big Ten tournament. But, as fate would have it, COVID-19 would shut down the entire spectacle of March Madness, leaving Hoosier fans left to wonder if IU would have made a run in the Big Dance.

The most disappointing season of all has to be the most recent under Miller. After securing the commitments of Khristian Lander, Anthony Leal, Jordan Geronimo, Trey Galloway, and with the returning Trayce Jackson-Davis, it looked as if Indiana may finally be alive with Hoosier Hysteria once again. As IU fans have come to realize, Miller simply couldn’t get it done. The Hoosiers would finish the season with a record of 12-15, the worst season yet under Miller.

Throughout the season, IU showed flashes of serious potential. For example, they beat Iowa, one of the best teams in the country, twice. It seemed like every time the Hoosiers would take a step forward, they would take two steps backward. Fans of the team were finally put out of their misery when IU lost to Rutgers in the first round of the Big Ten tournament, effectively ending their season.

On March 15, Archie Miller was released from the program. On March 28th, the Hoosiers hired hometown favorite Mike Woodson. Woodson played for legendary IU coach Bobby Knight from 1976-1980 and won a national championship in that time. The deal is for six years and will hopefully be enough time for Woodson to get the Hoosiers back into the national spotlight.