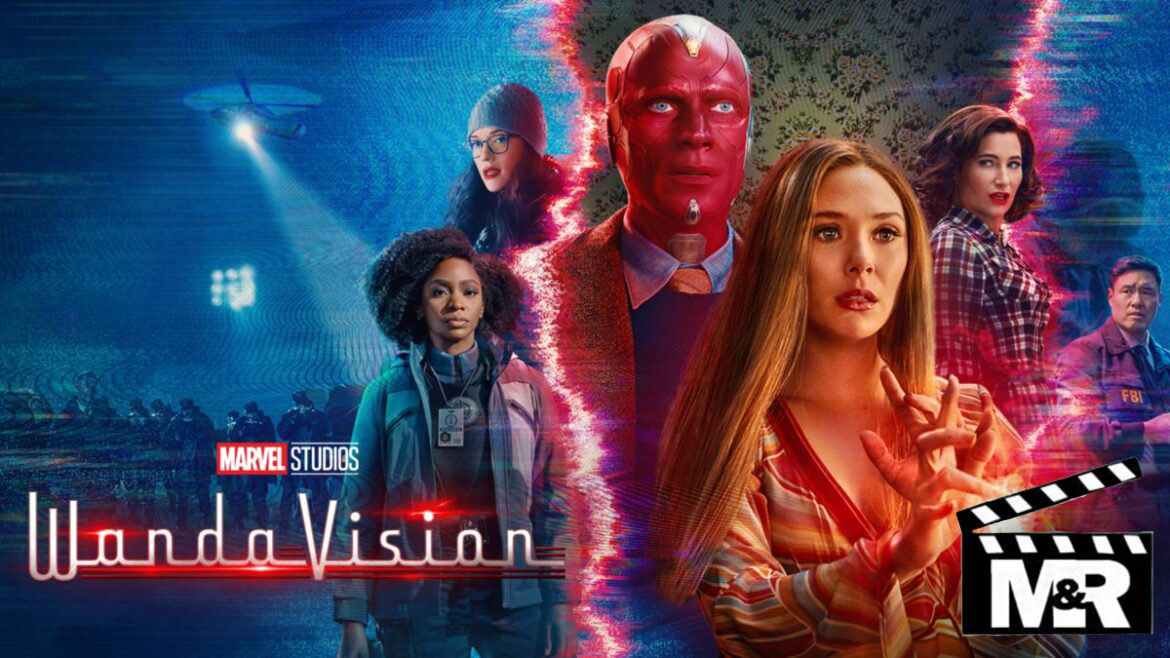 Hello movie lovers and welcome to (or back to) our column! Over the past month, Marvel’s first show on Disney Plus has been released: WandaVision. This is the first of the many new Marvel shows coming to Disney+ this year, and although it was the one for which we were initially least excited, it blew away our expectations. Nobody thought a love story between two side characters in a sitcom formula would capture as many hearts as it did. Beware: spoilers are below!

With the release of its ninth episode, WandaVision has finally and unfortunately come to an end. The lead up to the finale was definitely a wild ride, especially since nobody had any clue as to what they had just witnessed.

Each episode left you both fulfilled and wanting more at the same time. As more and more information was revealed, the more enraptured we became in the story. The “Please Stand By” screen at the end of each episode was the real villain to viewers, as we all craved more than what we got each week. The few post credit scenes at the end only left us wanting more, theorizing about what would happen in the upcoming week’s episode.

The episode titles were incredibly clever, and the use of different screen ratios also added to the authenticity of the sitcom aesthetic. We loved all the opening credits, especially the one in the second episode, since they parodied the sitcoms on which the episodes were based.

Though the first few episodes felt ridiculous and unnecessary, they set the tone for the series overall, giving it that sense of intrigue and confusion from the very beginning. The subtle hints and clues sprinkled throughout the first three episodes all came to a head at episode four, where the entire show shifted from what we originally perceived it to be.

This show definitely made the hardcore comic book readers happy, as it introduced several new character from the comics and even potentially opened up the X-Men universe to the MCU.

With a villain that the audience cannot help but loathe and one that is evil yet loveable, WandaVision tackles different approaches to who is seen as “the bad guy.”

Director Haywood is one of the most infuriating authority-type villains. He attempted to kill Wanda multiple times and even fabricated video footage of her to incriminate her. His interference with Wanda’s world and his several attempts to provoke her into doing something that would make people see her as the villain definitely seemed suspicious and rude. The attempted child murder was also seriously uncool.

Though her reveal was not as surprising to those who have read the comics, for most people, the reveal that the nosy neighbor, Agnes, was really an evil witch, Agatha Harkness, came as a shock. She was bold, charismatic, and always had a smile on her face, but honestly, the most amazing thing about her was her astoundingly catchy song. This was so amazing and memorable that it was the number one on the iTunes Top Soundtrack charts and was headed for the top ten on the Apple Music Chart on the same day that it was released.

Not only did it give life to Wanda and Vision, characters initially introduced in Age of Ultron, but WandaVision also added depth to many of the other previous Marvel movies, particularly the less esteemed ones.

It’s hard to deny that Captain Marvel, with its odd story telling sequence and lackluster performance overall, was a less than appealing movie. WandaVision, however, gave us more depth into Monica Rambeau’s character, and gave us hope for seeing her more in the future.

Darcy Lewis, from the first two Thor movies, also made an appearance in WandaVision. Though it definitely does not completely redeem those movies, it certainly gives a reason to go back and rewatch them. In addition, James Woo from Ant-Man and the Wasp also made an appearance. Though many people dislike the second Ant-Man movie, we actually thought it was really fun, so Jimmy Woo and his close up magic was definitely a welcome surprise.

The story brought us inside Westview and really brought life to Wanda’s grief and all of the trauma she had experienced throughout her lifetime. Episode eight took the viewers on a journey through Wanda’s past and watched her re-live everything she had gone through to become a Scarlet Witch. The show also took Wanda through the five stages of grief throughout the nine episodes and introduced the beautiful quote, “What is love, if not grief persevering?”

The finale brought everything to a close with two epic battle scenes where Wanda outsmarts Agatha, while getting an amazing new costume in the process, and Vision’s philosophical debate with his white counterpart in the library. Hayward’s diabolical schemes fell to pieces by the defeat of White Vision, and Monica, Darcy, Jimmy, Billy, and Tommy teaming up to take him down. Both post-credit scenes gave us more to look forward to in the future of the MCU and let us know that we have not yet seen the end of these characters we grew to love.

WandaVision enchanted us so much that we do not actually have too many negative things to say about it. The only faults that we see are the dismissal of Evan Peters’ Quicksilver by a lackluster “boner” joke. Also, the reveal of Wanda’s final costume was made less surprising by the promotional art. The appearance of the Skrulls did not intrigue us that much since the grand reveal of their integration was already made in the post credit scene of Spider-Man: Far From Home. Conversely, the lack of appearance from Dr. Strange was also noted, but we hope to see a Scarlet Witch and Dr. Strange team up in the upcoming Dr. Strange movie.

Both of us loved WandaVision and found ourselves laughing, crying, and theorizing throughout the entire course of the show. We would formally like to express our jealousy to the people who were able to watch the show in one sitting and did not have to wait that excruciatingly painful week between episodes. We look forward to seeing what Wanda will do in Dr. Strange and the Multiverse of Madness and cannot wait for the next Marvel show to grace Disney+, The Falcon and the Winter Soldier. Until next time, movie lovers!