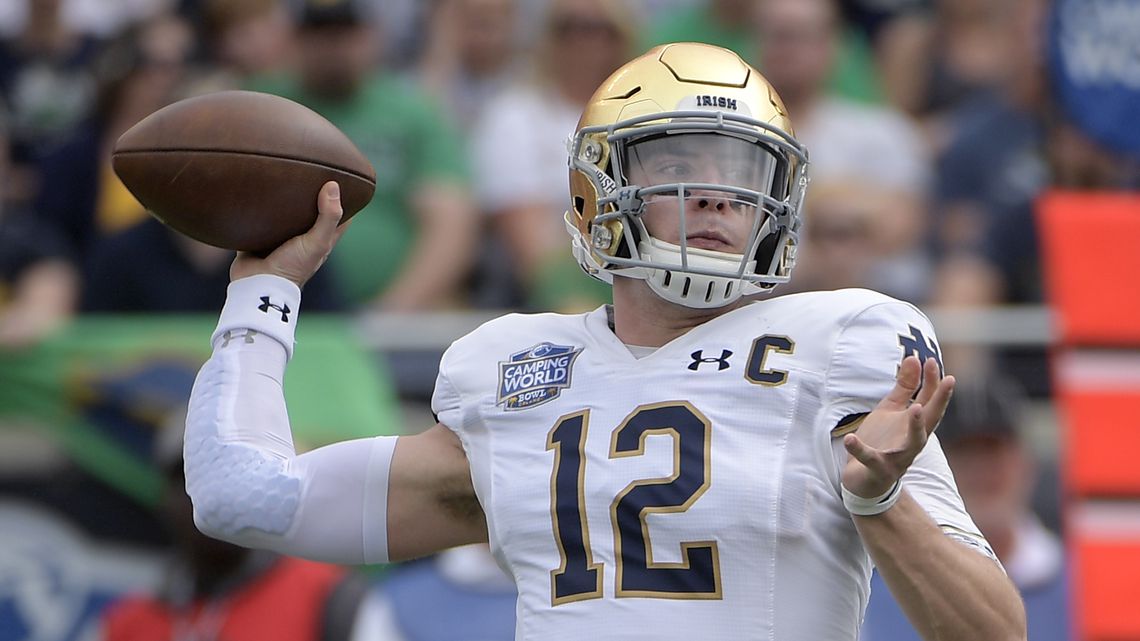 The Notre Dame Fighting Irish are poised for greatness

The Notre Dame Fighting Irish are poised for greatness

After a disappointing loss to Alabama in the College Football Playoff, Notre Dame was thrown into a period of doubt. Many players transferred or declared for the draft, but the overall talent that graduated from the prestigious university cannot be ignored. In addition to many key defensive players graduating, starting quarterback Ian Book, the winningest quarterback in Notre Dame football history, also left the program. The team also lost their defensive coordinator Clark Lea. With so many departures, it would be easy for a casual fan to say that Notre Dame is heading towards a downward spiral. This, however, is not the case at all.

Even with all of their losses, the Fighting Irish still have players from last season that will make a huge impact.

The explosive running back duo of Kyren Williams and Chris Tyree is looking like it will be one of the best running combos in the nation. With Williams and his big-play ability combined with the speed and athleticism of Tyree, many defenses around the nation will be stumbling after the pair to catch up.

Nationally recognized tight end Michael Mayer is also returning to the program after a stellar freshman season in which he racked up 42 catches for 450 yards and 2 touchdowns. The 6’5, 235 pound Mayer looks like he will be one of the best tight ends in the country. Offensive lineman Jarrett Patterson is also poised to become one of the best blockers in the country after coming back from an injury that sidelined him for the second half of last season.

Along with the returning members of this talented squad, Notre Dame has also continued to expand its staff and roster.

To replace Clark Lea, the Fighting Irish hired Marcus Freeman to lead the defense. So far, Freeman has been working with Notre Dame’s current players and has also gotten hot on the recruiting trail for defensive help.

With all of these current weapons and future commitments, the Fighting Irish seem like they have everything figured out. But one question still remains: Who will be the starting quarterback this season?

Finding the quarterback to succeed Ian Book is going to be a very tall task. Book is now the quarterback with the most wins in program history, finishing with a career record of 32-5 when he started or played significant minutes.

The Irish don’t have a lack of talent at quarterback, but the sheer amount of talent they have is what brings forth the compelling question. Notre Dame was able to land the commitment of Wisconsin grad-transfer Jack Coan, who many believe is the top candidate for the job.

Coan started for Wisconsin in 2019 and threw for 2,727 yards and 18 touchdowns on the season. He was poised to start once again in 2020, but when an injury sidelined him for the season, standout freshman Graham Mertz was handed the job and never looked back, showing flashes of pro potential throughout the season. This unfortunate series of events would lead to Coan transferring to Notre Dame.

Although Coan is the favorite to win the job, many believe that sophomore Drew Pyne deserves a serious look.

Pyne didn’t get many reps in last season due to the fact that he was behind Ian Book, who would normally play the entire game. In the small samples that were given, Pyne looked like a confident and accurate passer who could get out of the pocket if he needed to. He has shown improved arm strength and even more confidence in training. This has led many to believe that he deserves a shot at the starting role.

Brendon Clark, who was slated to be next up at quarterback last season, suffered a preseason injury that sidelined him for the year and forced him further down the bench for this season.

The only other contender for the role is true freshman Tyler Buchner, who despite all of the hype that surrounds him, is not ready for the college game. Buchner will most likely sit behind Jack Coan and possibly Drew Pyne for a couple of seasons before he makes his long-awaited debut in a Fighting Irish uniform.

Even though the Fighting Irish have many departures, it can definitely be argued that the players they are getting back and obtaining in the future ease the blow. Notre Dame is currently slated to be a top ten team in the country next season in national polls, and it isn’t hard to figure out why. The luck of this Irish team looks like it’s definitely trending in the right direction.