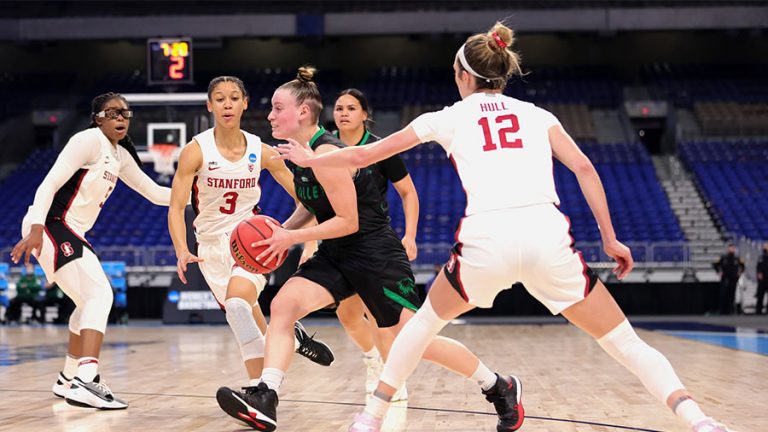 Maria Carvalho #3 of the Utah Valley Wolverines drives past Lexie Hull #12 and Anna Wilson #3 of the Stanford Cardinal in the first round game of the 2021 NCAA Women’s Basketball Tournament at the Alamodome on March 21, 2021 in San Antonio, Texas. (Photo by Carmen Mandato/Getty Images)

Maria Carvalho #3 of the Utah Valley Wolverines drives past Lexie Hull #12 and Anna Wilson #3 of the Stanford Cardinal in the first round game of the 2021 NCAA Women’s Basketball Tournament at the Alamodome on March 21, 2021 in San Antonio, Texas. (Photo by Carmen Mandato/Getty Images)

The NCAA’s poor treatment of women’s sports has surfaced recently due to new information from a few of the basketball players. The women players received less food, less accurate COVID-19 testing, and less exercise equipment in their NCAA March Madness Tournament bubbles than their male counterparts. U.S Sen. Kirsten Gillibrand, a Democrat from New York, said in a Tweet, “This is outrageous – but it’s not just about the weight room. From their facilities, to their food to giving them less reliable COVID tests, the women’s NCAA basketball teams are being shortchanged.”

The vice president of NCAA basketball, Dan Gavitt, apologized, but some college women’s basketball coaches say the situation is part of a long-standing pattern of unfair treatment for college women athletes.

Former University of Notre Dame women’s head basketball coach Muffet McGraw tweeted, “The fact that there’s a huge disparity between men’s and women’s sports is hardly breaking news. We have been fighting this battle for years.” Research demonstrates that NCAA leadership routinely provides women with fewer resources. They also did not provide consistent opportunities to participate in sports until the passage of Title IX in 1972, an educational amendment that prohibits sex discrimination in any education program or activity receiving federal financial assistance. Even after Title IX, women still face discrimination, sexism, and stereotyping in sports.

Sedona Prince, a player for the Oregon Ducks, brought much attention to the matter by posting on both Twitter and TikTok, becoming the face of the movement. She shared her experience of the food and poor treatment along with pictures of the exercise equipment before and after they updated it.

The NCAA responded quickly and will hopefully continue to make changes for the better. Nothing can be fixed right away, but hopefully, there will be steps in the right direction.