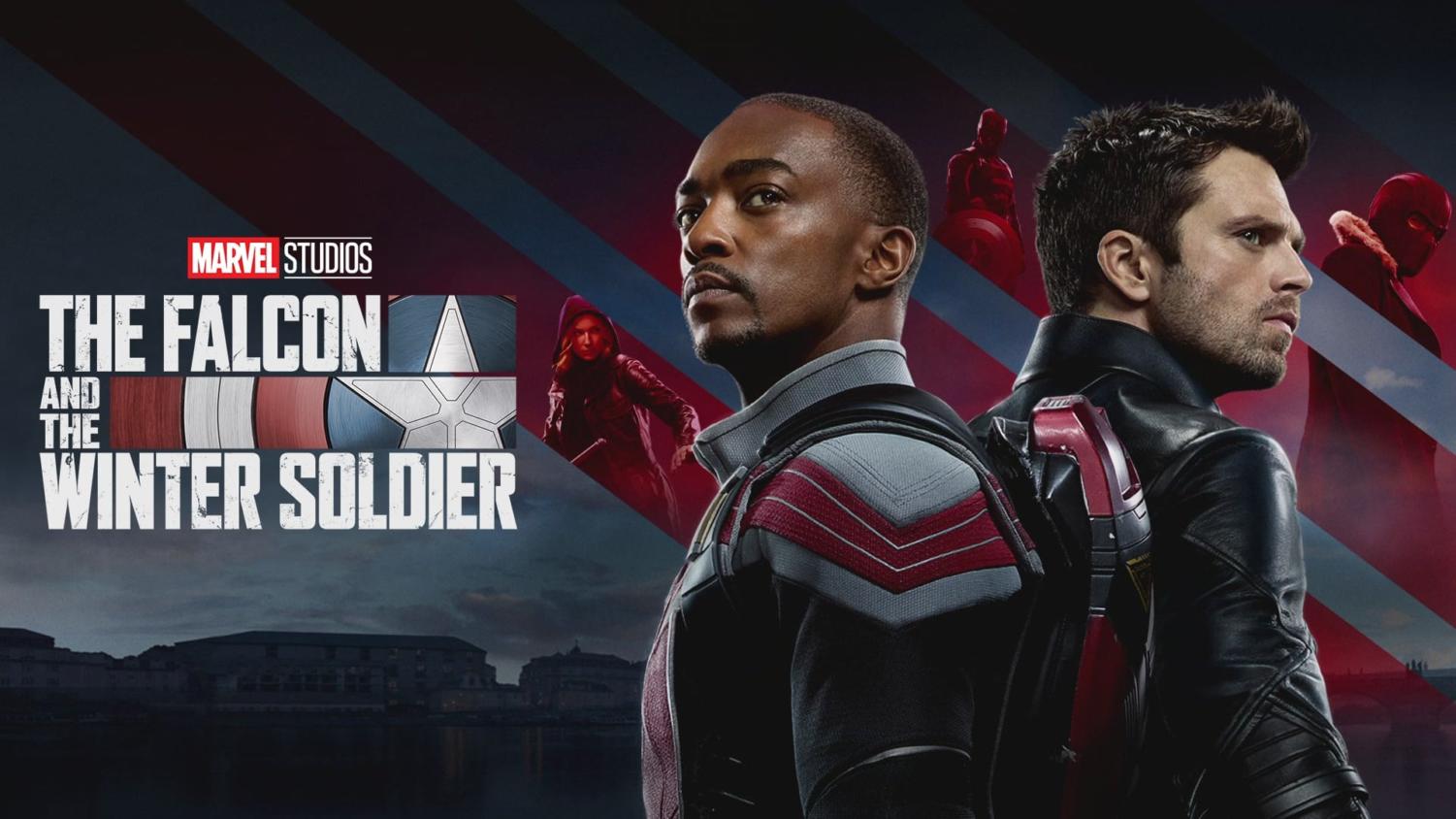 Sebastian Stan and Anthony Mackie star in the Marvel TV show The Falcon and the Winter Soldier.

Sebastian Stan and Anthony Mackie star in the Marvel TV show The Falcon and the Winter Soldier.

The Falcon and the Winter Soldier Review

Hello Marvel lovers! Welcome to (or back to) our column. Today, we are going to be sharing some of our thoughts on Marvel’s new show, The Falcon and the Winter Soldier. Although this show did not receive as much hype from fans as WandaVision did, there were still a few things we wanted to discuss. Spoilers follow.

The Falcon and the Winter Soldier takes place six months after the events of Avengers: Endgame and revolves around the turmoil going on in the world between those who were dusted and those who remained on Earth. Sam Wilson, aka The Falcon, has to decide what to do with Captain America’s shield and whether he will step up into the mantle or not. Bucky Barnes, aka The Winter Soldier, is trying to make amends for the crimes he committed while under Hydra’s control. The two have to come together with the help of some unlikely allies to stop a radical group of terrorists called the Flag Smashers and their leader, Karli Morganthau, who want the world to remain without borders as it was during the Blip.

Like many other things this past year and a half, changes had to be made due to COVID-19. The Falcon and the Winter Soldier was originally slated to be the first of Marvel’s new shows to be released, but due to the larger cast and crew, the show was pushed back to premiere after WandaVision. Other changes include subtle plot points such as the appearance of the Dora Milaje instead of Black Panther himself as Chadwick Boseman, unfortunately, passed away this past summer.

Though Marvel never confirmed it, some fans theorize that the original plot of The Falcon and the Winter Soldier coincidentally centered around a global pandemic and that the writers of the show changed the plot after the outbreak of COVID-19. There are a few things that back this theory up, including the stolen vaccines in the second episode, the mysterious death of Mama Donya, and the lack of coherence between the episodes overall.

The first episode and some parts of the second episode were incredibly expositional heavy. Episode two introduced Isiah Bradly who aided Sam’s character and gave the audience some insight into the backstory of the supersoldiers and the portrayal of black heroes. Episode two also brought Sam and Bucky together to go up against the Flag Smashers for the first time.

With a daring jailbreak and an undercover mission in a city plagued with crime, episode three seemed like a fun spy movie. The dynamic between Zemo, Bucky, and Sam kept the episode lively and enjoyable despite the dark gloomy atmosphere in Madripoor.

Episode four supplemented episode three very well. The Dora’s fight scene was epic and honestly one of the most fun to watch throughout the whole show. Sam’s conversation with Karli also contrasted his caring and kind character as opposed to all of John Walker’s rash decision making. John Walker also showed his true colors in this episode, proving fans correct that he was not anywhere as good of a man as he originally appeared.

Episode five was just plain boring. While there were several heartwarming bonding scenes between Sam and Bucky, the majority of the fifth episode seemed to center around the most boring topic to ever exist: boat repairs. Though Sam’s training montage scene in this episode managed to perk it up at the very end, the incredibly slow-paced, dialogue-heavy feel just did not fit in, especially right before the grand finale. Contessa Valentina Allegra de Fontaine has much potential to be a fun character, but her introduction seemed too forced and awkward.

After the drastic change of pace and lack of build-up in the fifth episode, the final episode definitely suffered, with pacing issues in and of itself. Batroc and his fight with Sam seemed incredibly shoehorned into the episode, and honestly, we did not even realize he was the same guy from the premiere episode until we Googled him. Sam’s five-minute speech, although moving and heartfelt, made the episode feel extremely politically heavy, Sharon Carter’s mysterious phone call near the end left us skeptical, and Bucky’s five minutes of redemption did not seem adequate. We are curious to see where John Walker’s “US Agent” plotline will take us in the future. We also thought it was ironic that Isaiah’s statue was made of a bronzy metal, which made it hard to determine his complexion.

The Falcon and the Winter Soldier was nowhere near as good as WandaVision, which can be attributed to the lack of plot twists and cliffhangers. The forty-five minutes to an hour long episodes also made it harder to maintain audience attention.

The reveal of Sharon Carter’s secret identity wasn’t that spectacular as it was very obvious and many fans had already come to the same conclusion. John Walker’s fall from grace and return from the dark side was also pretty predictable. In addition, Sam’s new suit reveal was nowhere as epic as Wanda’s.

One of our biggest gripes about the show was the lack of character development across the board. For a show with The Falcon and The Winter Soldier’s names as the title, we felt as if Sam, and especially Bucky, both lacked any big developments in character. Sam’s growth was shown more than Bucky’s, although he was arguably the character who needed it less.

All of Sam’s development came from giving up the shield, to talking to Isaiah Bradley, to accepting the shield again. Bucky, on the other hand, had some serious trauma that could have been unpacked from his time as The Winter Soldier or the fact that he is displaced in time, basically alone. His entire arc only took place within the first and last episodes and really did not feel like they resolved much. Bucky has been trying to “make amends” and prove he is no longer “The Winter Soldier,” yet his title remained the same at the end title card even after Sam’s changed to Captain America. We appreciate Sam and the challenges he overcame, but the show seemed to ignore the other title character a majority of the time.

The person with arguably the best character development in the series is John Walker. Introduced as the “new Captain America” in the very first episode, John Walker immediately received a lot of hate from the fans. Their hatred of the character grew as the show progressed right up until the moment when he, completely unhinged from the effects of the super soldier serum and the death of his friend, beat one of the Flag Smashers to death with Cap’s famed vibranium shield. His absence in the fifth episode as the infuriating antagonistic character was duly noted, but the post-credit scene of him forging his own shield made up for it. Though the payoff from that semi-cliffhanger scene wasn’t as grand as it could have been, John Walker’s decision to save the lives of civilians at the cost of his own revenge was an expected, yet still pleasant, turnaround.

The side “villains” of the show carried the whole thing. Wyatt Russel and Daniel Brühl, the actors who portrayed John Walker and Zemo respectively, phenomenally brought the two characters to life. Both gave the audience something to get riled up about, whether it be John Walker’s insensitive approach to being Captain America or the Zemo’s dance scene in Madripoor. Zemo, with his steadfast and headstrong approach to life, especially gave the show a fun spin. The scene in episode four where he began smashing the vials of super serum really shows he will always stick to his main mission.

The actual villain, Karli Morganthau, we had mixed feelings about. Honestly, like Sam, we did not really one hundred percent disagree with her main goal, but the way she approached it made us question whether or not to sympathize with her. We did like how some of her followers also seemed hesitant when she started to go too far. She had a really compelling motivation, but not an interesting character in general. Compared to all of the other MCU villains, she falls pretty flat.

The Falcon and the Winter Soldier definitely left us wanting more and not in a good way like WandaVision. We wanted more of the Dora Milaje, more of Zemo, and more of Bucky’s redemption. Though it was fun to watch in the moment, upon further inspection the episodes just don’t measure up. We did enjoy The Falcon and the Winter Soldier, but it was just quite different than what we originally expected. We are looking forward to seeing what these characters will bring to the future of the MCU.