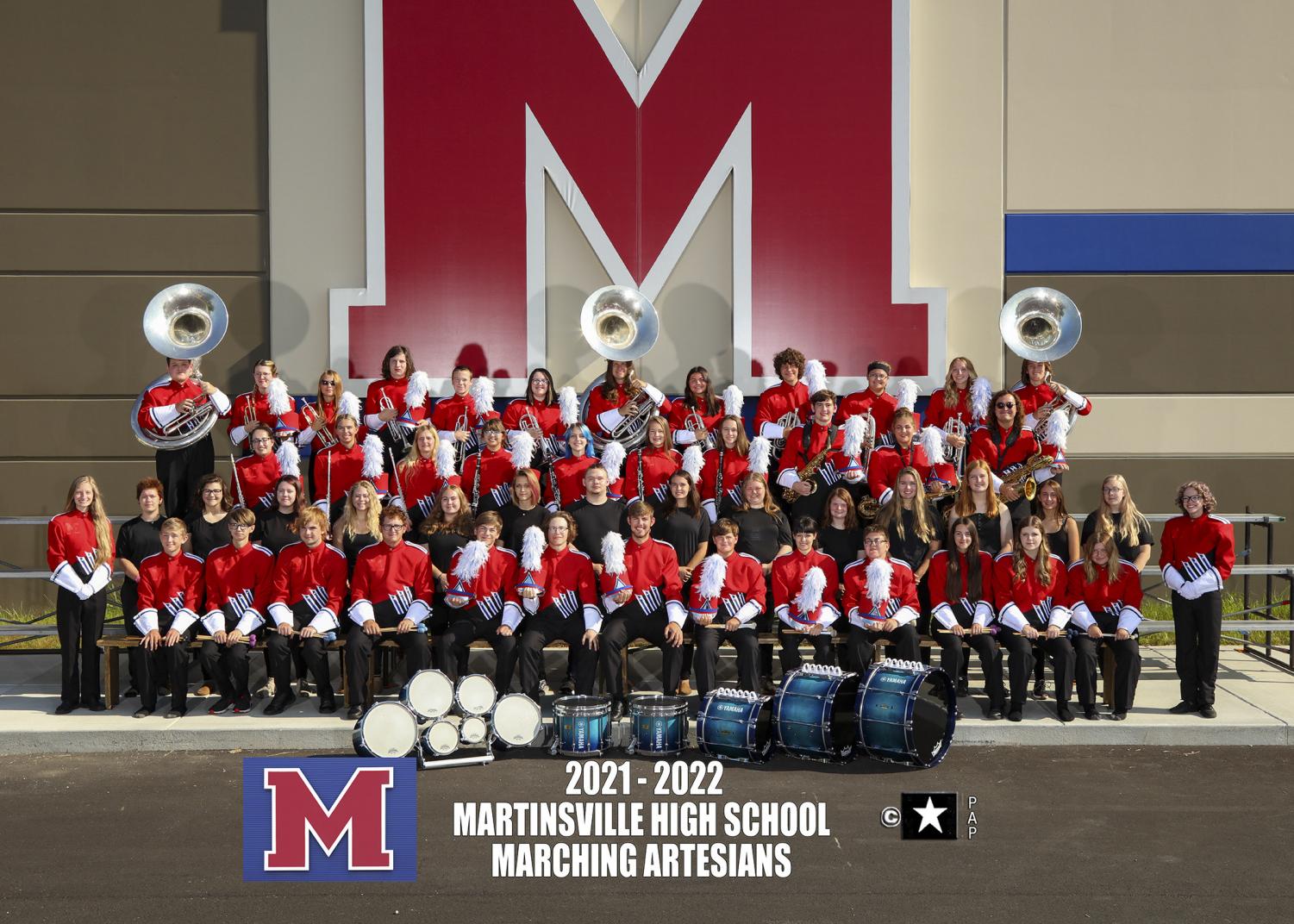 Marching Into A New Season

COVID-19 wreaked havoc on the Martinsville Marching Artesians this past year. With limited practice times, having to mask up in 90-degree heat, and no competitions, everyone wondered if there would even be a season this year. In May, they finally had an answer: this season was good to go!

The Marching Artesians began rehearsing in early June, hosting week-long camps and auditions for new leadership roles, one of which was the role of drum major. A drum major leads the marching band both in rehearsal and in performance; they’re the person that salutes the audience and conducts the show on the podium. Drum majors also act as the line of communication between staff and fellow students.

In the past, there has only been one drum major for the marching band, but this year, two were selected: Elizabeth Heath and myself, Vincentia Thatcher. Both have been working towards this leadership role since they started the activity. Heath said, “In marching band my eighth grade year, after watching what the drum major then did, I decided that’s what I wanted to do. I just worked hard and made my way up from where I started. Now, I’m here and I like helping people.”

The two drum majors have completely different personalities, but they use that to their advantage. Heath thinks “it’s cool that we have different personalities because we can help everyone in a variety of ways; if [she] can’t help someone, maybe I can and vice versa, and it also works very well with teaching.” When asked how they work together, Thatcher said, “Both of us lead in different ways; I’m very outgoing, while Elizabeth is more chill and introverted. Although we are complete opposites, we mesh well together and I think we’re an awesome duo.”

Since there used to only be one drum major, the staff had to get creative with the two new drum majors. Instead of one person conducting the entire show, one drum major will conduct two movements, and the other will conduct one movement as well as the National Anthem. However, unlike a typical show for the Marching Artesians, there is a conductor switch in the middle.

Elizabeth Heath stated “I think it’s gonna be hard at first, but once we work it out and do it well, it’s gonna be incredible.” It is still undecided about who will be conducting the closer of the show, but right now, Heath is in charge of the opener while Thatcher covers the ballad. Both drum majors love conducting their respective movements, and can’t wait until they can show their community what they’ve been working on since May!

Along with the changes in student leadership, marching band members have also seen a couple of new faces staff-wise. Gavin Cloyd was hired to be a woodwind tech and Karl Vierling, who taught the front ensemble last winter, returned this fall to be a percussion tech. The band members were disheartened to say goodbye to their old techs, but the new techs bring a lot to the program.

Cloyd was previously a drum major at his high school, so he had lots of experience for Thatcher and Heath to learn from. “He really helped,” said Heath. “It was his first year teaching, so obviously he was getting used to things, but once he started getting the hang of it, he had a lot of valuable information to share.”

With a total of seventeen students, the senior class for the Marching Artesians this year is much bigger than it has been previously. Senior Shelby Yount elaborated on the issues such a large graduating class brings: “I think it’s going to be hard next year when there are so many people missing, but it also gives us a very big opportunity to pass on all the information that the seniors have learned. It’ll give the younger people we do have a chance to fill in those leadership roles when the seniors graduate.”

Yount also talked about how different this season is compared to the 2020 season: “Last season I had to force myself to go to practice; it wasn’t a sense of ‘oh I hate doing this,’ it was more like I didn’t see a purpose of the season because there was no end goal. This year, I’ve had so much more drive and so much more fun even though we’re practicing in some of the worst heat we’ve ever had!” She said, “As far as marching goes, it’s the best we’ve looked since my freshman year, but music-wise I think we have a little longer to go.”

Drum major Elizabeth Heath is also enjoying the season; she feels like this season is an actual season, loves the group of people in the band this year, and said that “the vibe and energy everyone has is very nice.”

Band members are eager to start competing once again. ISSMA competitions will resume in early September, and the Marching Artesians can’t wait! Their show this year revolves around the night transforming into day, and starts off with Lionel Richie’s famous tune “All Night Long.” The ballad involves several soloists, and is based on the iconic piano solo “Clair de Lune,” while the closer features Jacob Collier and Dodie’s arrangement of “Here Comes the Sun.” This musical selection was first chosen in 2020, but Mr. Ken Belt decided to save the show for 2021 because of the pandemic.

With a full show and numerous competitions ahead of them, the members of the marching band are excited about this fresh start. They hope to qualify for ISSMA State Finals this year like they did before COVID hit in 2019. The Marching Artesians will be performing at halftime during home football games, and they encourage everyone to join them in a journey from dusk to dawn!