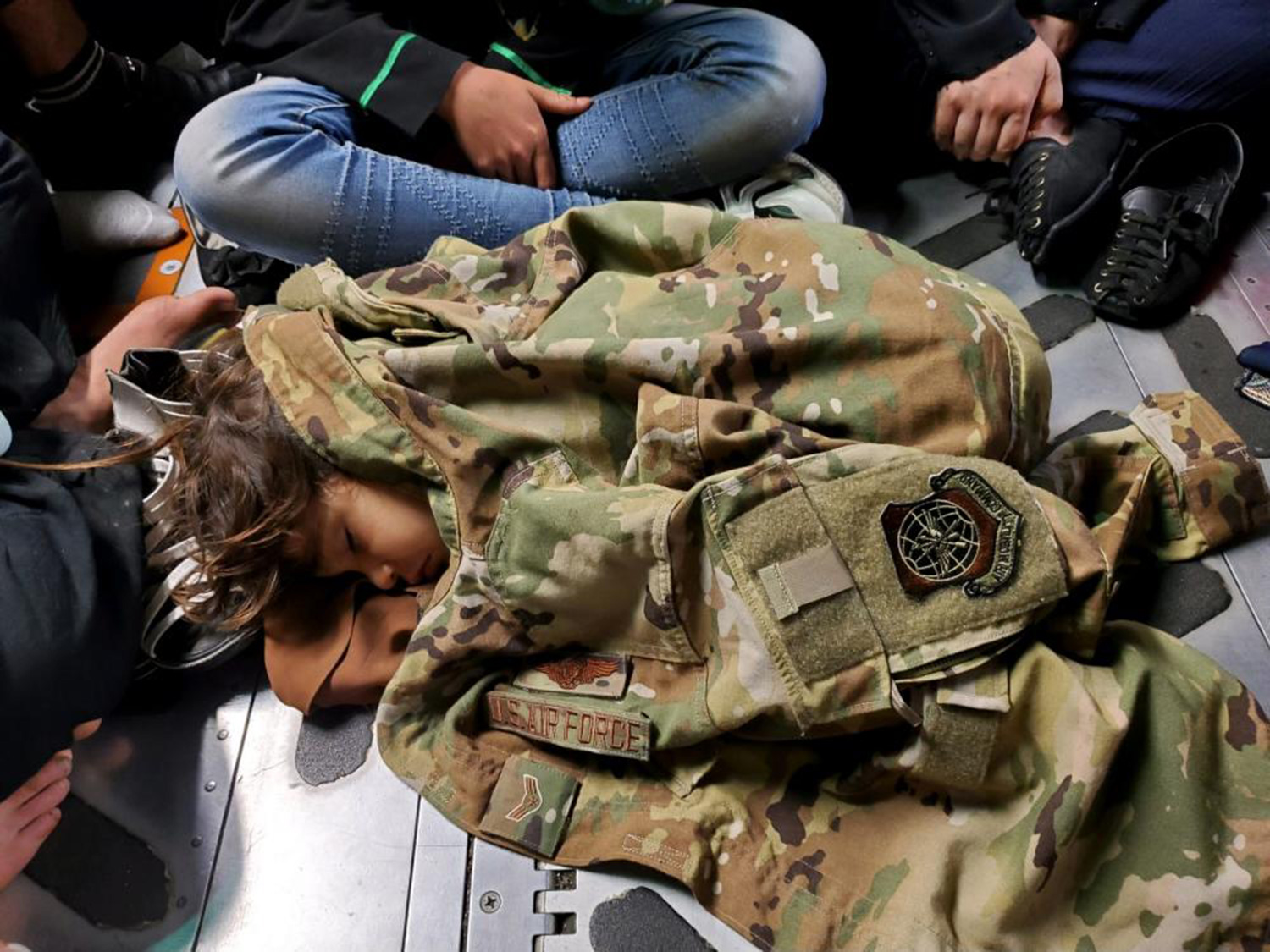 An Afghan child sleeps peacefully under the warmth of an Air Force soldier’s uniform.

Shortly after 9/11, the United States pushed Taliban fighters back a few paces and began making efforts to restore Afghanistan, resulting in a war that spanned for two decades. This war has claimed the lives of nearly 200,000 people and cost upwards of $2 trillion. The outcome? We lost. Now, twenty years later, it seems as if America is right back where it started: the Taliban has control over Afghanistan, but this time, it’s absolute.

On the evening of August 30, 2021, a lone U.S. military plane departed Afghanistan – for the last time. This final plane leaving ended a war that lasted a grueling two decades, but it also left behind tens of thousands of innocent Afghan citizens and just under 100 Americans.

Frantic mass evacuations in Afghanistan began a couple of weeks before August 30, many of which took place in the Kabul airport. On August 19, a group of Taliban suicide bombers attacked large crowds outside the airport, killing over 70 Afghans and 13 U.S. military personnel. Among the Americans killed were 11 Marines, 1 Army Staff Sergeant, and 1 Navy Hospital Corpsman.

The deaths of these soldiers infuriated the American public; many criticized the government’s decisions, while others thought not enough attention was being put on the Afghan citizens left behind, many of whom had valid visas to the United States. With any war, people will argue over politics, but after hearing of August 19’s tragic bombing, America united itself to honor its fallen heroes.

Even with their worlds flipped upside down, the families of the 13 soldiers killed gave it their all to honor their lost loved ones. Social media was flooded with mothers and fathers telling their children’s stories, supportive messages for the families, and communities all over the country came together to show their support. In fact, many bars across the US poured a beer for each of the fallen, displaying all 13 of them on a reserved table; Wings, Etc. and Chili’s in Martinsville were two of the many.

But who were these soldiers? They’ve been all over the news, but we don’t really know anything about who they really were.

David Espinoza, 20, always dreamed of being a Marine; his mother said that “it was his calling.” She described him as being soft-spoken, quiet, a dedicated soldier, and always spending time with his family and friends. Espinoza loved helping others in need, and he truly enjoyed serving his country.

Nicole Gee, 23, originally planned to be an air traffic controller for the Marines but became a maintenance technician instead. Her family remembers her as caring and hard working, and just a month before her death, Gee was promoted to the rank of sergeant. One of her friends said “She was a Marine’s Marine. She cared about people. She loved fiercely. She was a light in this dark world.”

Kareem Nikouli, 20, was born the year the War On Terror began, and his death tore apart the people of communities east of Los Angeles’s hearts. A close family friend stated that Nikouli will always be remembered as a hero, and he “was an incredible individual with a great heart.”

Ryan Knauss, 23, wanted to be in the military ever since elementary school. He was selfless, charismatic, and a great problem solver. Knauss’s wife, Alena, described him as “one of those people that anything he wanted to do, he could have done; he was brilliant. But he just wanted to serve his country, that’s all he wanted, he thought that was the best way he could help people.”

Humberto Sanchez, 22, was “a light that was on 24/7,” according to a school friend. He was known for his ability to make anyone laugh, and his hometown was devastated after receiving news of his death. Sanchez knew how to make anyone smile, and he truly cared for the safety of others.

Hunter Lopez, 22, had a mother who’s a deputy sheriff and a father who’s a sheriff’s captain. He planned on joining the local law enforcement after his deployment as a sheriff’s deputy. His whole community “feels the anguish and [mourns] the death of Hunter, who answered the call to serve, defend and protect our nation.”

Maxton Soviak, 22, was the only sailor killed in this attack. In a tribute she posted on Instagram, Soviak’s sister said, “My beautiful, intelligent, beat-to-the-sound of his own drum, annoying, charming baby brother was killed yesterday helping to save lives. My heart is in pieces and I don’t think they’ll ever fit back right again.”

Dylan Merola, 20, always had a charming smile on his face. He originally had his sights set on being an engineer but decided on being a Marine because of his family’s military ties. At the time of the explosion, Merola was helping to evacuate children, and his family will always remember him as a hero.

Johanny Rosario, 25, was responsible for screening tens of thousands of women and children into the Kabul airport; in doing so, she saved countless lives. Rosario saw serving her country as a privilege, and according to her loved ones, “the importance of serving her family, friends, and community permeated most every aspect of her life.”

Daegan William-Tyeler Page, 23, was tough on the outside with a huge heart on the inside. His family said that he was a “genuinely happy guy that you could always count on.” According to loved ones, Page loved animals and the Chicago Blackhawks, and he couldn’t wait to return home after his time serving.

Darin Taylor Hoover, 31, was a born leader. He was devoted to serving his country, but he was devoted even more so to his family. Hoover’s father said it best: “He was doing for others what they couldn’t do for themselves, and he made the ultimate sacrifice doing that.”

Rylee McCollum, 20, signed up for the Marines as soon as he turned 18; he knew joining the armed forces was what he wanted to do with his life. Earlier this year, McCollum had actually gotten married, and he and his wife were expecting their first child. When asked about his former student, McCollum’s high school wrestling coach said, “He was always much bigger in character and in spirit than he was physically; he was always much, much bigger. I mean, quite frankly, I think he was much bigger than all of us.”

Jared Schmitz, 20, was on his first deployment when he was killed. Like many of his fellow Marines, Schmitz knew he wanted to be a Marine long before he started boot camp. In a heartbreaking interview with a local radio station, his father said, “His life meant so much more. I’m so incredibly devastated that I won’t be able to see the man that he was very quickly growing into becoming.”

These 13 souls positively impacted the lives of countless people all across the globe and will be greatly missed by many.