LGBTQ+ In the Military 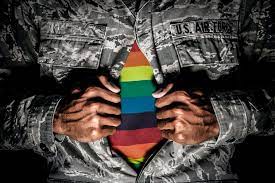 Throughout history, people in the LGBTQ+ community have been discriminated against countless times. This discrimination caused some to not be able to get a job, especially in the military. Gay men, lesbians, and bisexuals could not enlist in the US military until 2011. Up until 2021, transgender people could not enroll either. Some are still wary of enlisting because of the fear of being harassed.

In the past, people in the LGBTQ+ community experienced serious hate crimes and discrimination throughout parts of their life—some being physical, while others being affected mentally. For example, in the early 1940s, being gay was considered a mental illness and took a toll on peoples’ mental health.

Since being gay, bisexual, or lesbian was classified as an illness, they were ineligible to serve. According to Military One Source, “In 1933, the ‘don’t ask, don’t tell’ policy went into effect allowing closeted LGBTQ+ people to serve in the military.” However, if you ever told anyone, you would be discharged immediately. After 1982, being gay and lesbian was banned from military ranks.

After several years of not serving, gay men, bisexuals, and lesbians were allowed to join the military in 2011. It was a step forward in equality, yet people who were transgender still could not enlist. This changed in 2021 when President Biden signed an executive order to get rid of President Trump’s ban on transgender people joining the military.

Countless times throughout history, people in the LGBTQ+ community have been discriminated against not just in certain situations but in everyday life. Only recently have we been able to turn this around and take a step in the right direction for equality.