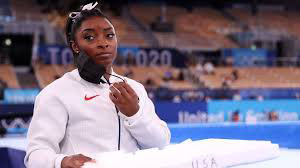 In the 2021 Olympics, the world was shocked when Simone Biles decided to drop out before her final events. Along with many other sports, gymnastics was a big talk all over the media, especially Simone Biles who came out and explained how she has struggled with and is currently struggling with, her mental health before dropping out of the Olympics.

For many, this was a huge eye opener about athletes’ mental health. Other athletes all over the world are struggling as well, and it’s not just Olympic-level athletes. Even athletes in the middle school and high school level feel the strain, stress, and pressure associated with their sport.

Two girls on the MHS gymnastics team gave their perspectives on this and how they relate to it. Gabby Grubb is a level nine gymnast at Martinsville Gymnastics Academy. She has been a gymnast since she was five and has had lots of experience with the sport. She feels as if the mental health of athletes is very important and needs to be spoken about more.

When asked if gymnastics affects her homework, she answered, ”I practice eighteen hours a week, so yes I would say it affects my school work. Getting home late at night after hard practices makes me feel less motivated to get work done.”

Gabby also spoke on how gymnastics affects her mental health. “Growing up in a gym, you are constantly judged and it is a very strict environment. Between being watched and critiqued for how you perform and being compared to everyone else makes it difficult.” Gymnastics not only affects their mental health, but also their home and school life. Gabby explained, ”I think it affects my home life and school life in a negative way. I do not get to spend as much time with my family, the amount of time studying, or getting the amount of work done as I wish I could.”

Finally, she shared how she related to Simone Biles and how she felt about her decision at the Olympics,”I don’t think I related to Simone in very many ways, but I do think I relate to her when it comes to mental health and the ability to keep going. I am definitely not on the stage that she is on, but I think overall, no matter how good or bad you are, mental health is something each gymnast struggles with in a way and can relate to one another when it comes to it.”

Her opinions differed in regard to Biles’ decision,  “I do not agree with what she did. I think she let her team down with the decision she made. She could’ve dropped out of event finals, but doing it at the all around or team finals was rude to her team.”

Phoenix Woodard is also on the MHS gymnastics team and has been doing gymnastics since she was two. Phoenix is another level nine gymnast at Martinsville Gymnastics Academy, so she also had some great perspectives on this topic.

In March of 2021, Phoenix tore her ACL and meniscus. She had surgery in May and is still in recovery, so due to being out of season, her answers may differ. On the topic of gym hours and that affecting homework time, Phoenix said, ”I used to spend around twenty hours in the gym per week. I spent sixteen hours practicing and four coaching. Sometimes I would find it hard to go straight from school to practice, then home to do schoolwork, but none of us have known any difference.”

Phoenix also spoke on how gymnastics affects her mental health. “It is extremely stressful and draining sometimes. It pushes you to the edge of your limits and forces you to jump. Whether you fall or you fly is completely up to you. It can be exciting and terrifying all at the same time. Gymnastics affects your mentally health both positively and negatively, but it has taught me so many amazing things along the way.”

Opposed to Gabby, she had a different opinion on Simone Biles’ decision at the Olympics. “She stood up for herself while under an extreme amount of pressure which is something that I aspire to be able to do. She handled herself the best way she possibly could. She did it even though she knew the entire world was watching. Sometimes in gymnastics things just get in your head…sometimes the best thing you can do is push through, but if it is to the point where you are putting yourself in danger it isn’t worth it.”

The mental health of athletes needs to be focused on and normalized a lot more. What Biles did at the Olympics was something never seen before. Whether you believe she was being brave or letting her team down, what she was doing was remarkable!

Mental health is not talked about enough in athletics. It may make some days very hard and unbearable just trying to push through. These ladies, along with all gymnasts, are appreciated and respected for their hard work. Gymnasts go through a lot with their mental health, and we should acknowledge all they do!