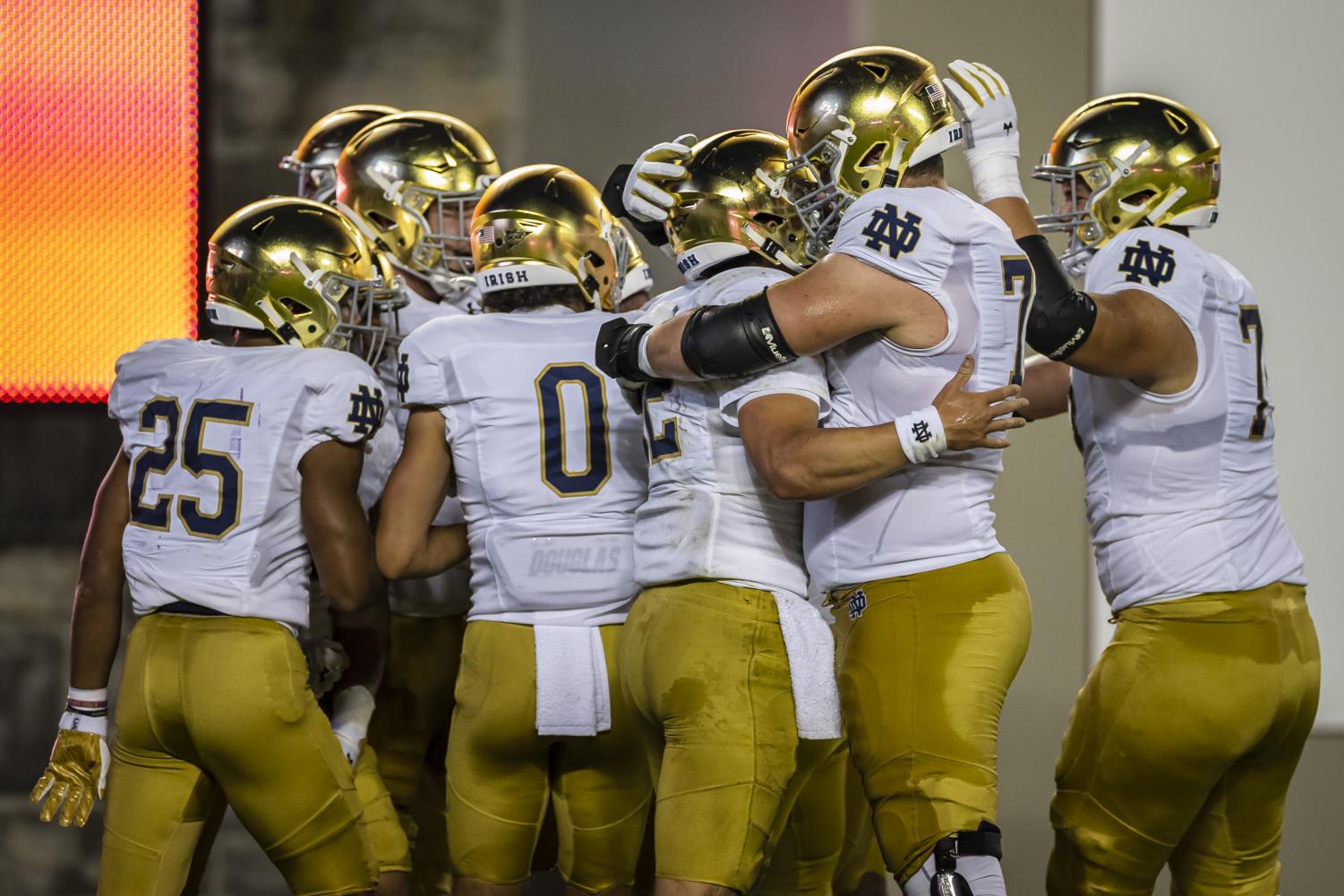 The Fighting Irish are back

The Fighting Irish are back

Notre Dame Football is Back!

On September 5th, the Notre Dame Fighting Irish football team took the field for their season opener against the Florida State Seminoles. This game was the first in a long line of tests for this new version of the Fighting Irish. Notre Dame would go on to win 41-38, but many problems were exposed during the course of the game.

Notre Dame did not play a bad game. In fact, they did really well with what they had. With starting linebacker Marist Liufau missing the season with an injury and defensive end Jordan Botelho missing the game due to COVID protocols, the Irish were without two coveted playmakers on defense.

Despite these absences, the defense did all it could to help Notre Dame win.

Superstar safety Kyle Hamilton had two interceptions while cornerback Clarence Lewis added another. The Irish had five sacks in total, with defensive end Isaiah Foskey contributing two of them. The main problem on defense was the three-man defensive line that was in use by new coordinator Marcus Freeman. This scheme allowed for the Seminoles to run all over the Irish throughout the course of the game and forced senior kicker Jonathan Doerer to ice the game for Notre Dame.

The Notre Dame offense also performed well with what they had. Although the offensive line was lackluster due to the fact that they lost four of their five starters from last season, matters were made worse when starting left tackle Blake Fisher went down with a knee injury.

Even though the line wasn’t up to par, transfer quarterback Jack Coan threw for 366 yards and four touchdowns in the game and set a record for passing yards in a debut game.

Following this narrow victory, the Irish also treated us to a near-disaster in a 32-29 win over Toledo. During this win, Blake Fisher’s replacement, Michael Carmody, went down with an injury which forced freshman Tosh Baker into the starting lineup.

Notre Dame would follow these lackluster performances with two dominant wins over Purdue (27-13) and fellow top-25 member Wisconsin (41-13). These performances were abundant with defensive dominance for the Irish yet the offense never really felt like it had an identity.

The Cincinnati Bearcats have been a team on the rise since 2018 and have been building behind superstar quarterback Desmond Ridder for a long time. Ridder is the prototype of a modern quarterback. He rarely makes mistakes with his arm, can make throws on the run, and has the ability to break out a huge rush with his legs. He has a plethora of wide receivers to choose from and Jerome Ford, a running back who transferred to the program from college football powerhouse Alabama. The Bearcats also have a well-rounded and experienced defense highlighted by cornerback Ahmad “Sauce” Gardner.

This matchup proved to be too tall of a task for Notre Dame as the Fighting Irish lost 24-13. Throughout the game, the inexperience and lack of offensive identity were showcased against a really good team. The defense gave Jack Coan and the offense many chances to capitalize, but those opportunities were never acted upon. All three of Notre Dame’s quarterbacks played in this game as head coach Brian Kelly attempted to figure out who was the best fit and Cincinnati took advantage of it.

Win or lose, Cincinnati was a teaching moment for the young team. Games can’t be won if you don’t know what you are going to do and how you are going to do it. The Irish will have a chance to get back on track on Saturday when they travel to Blacksburg to take on the Virginia Tech Hokies.