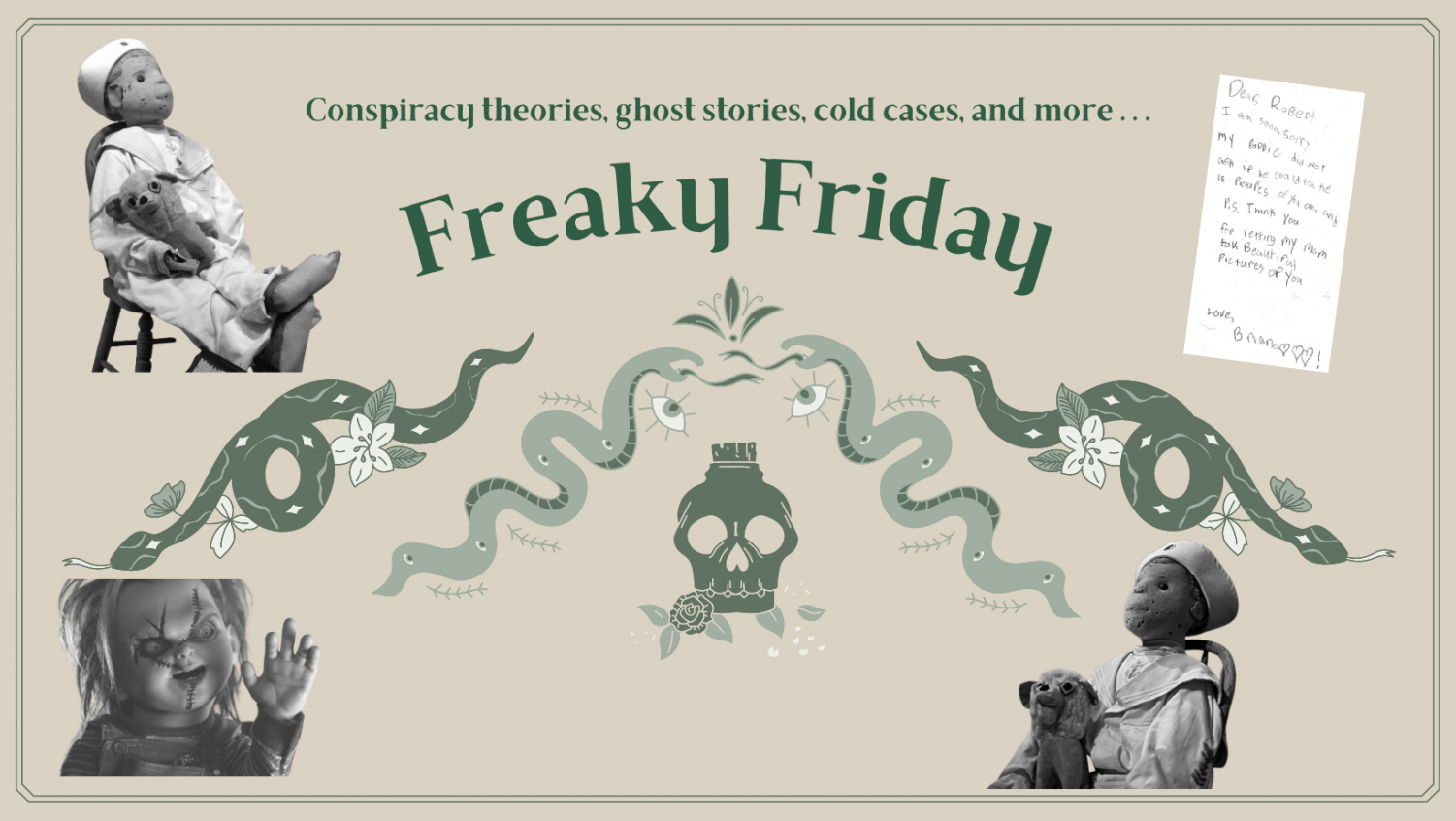 Nobody likes creepy dolls, but most of them just look creepy; they don’t actually do any harm. There’s no real-life Chucky or anything like that, right? Right??

A Bit of an Exposition

Most people are probably familiar with the movie franchise Child’s Play, which features the tiny but cold-hearted doll, Chucky. However, Chucky isn’t just fictional; his character was based on a haunted doll named Robert, who wreaked havoc on a wealthy family at the opening of the 20th century.

In the early 1900s, the Otto family resided in a house on a large plantation in Key West, Florida. The family was very comfortable money-wise and had several servants to whom they weren’t all too kind. One of the members of the Otto family was a young boy, Robert Eugene Otto, and everyone referred to him by his middle name. When he was ten years old, Eugene was gifted a large doll, which he named Robert, after himself. Robert was three feet tall, incredibly creepy-looking, and was accompanied by his trusty dog, who looked just as frightening. This was the beginning of something sinister.

Where did Robert come from, though? His origins aren’t set in stone, but many people believe he came from one of the Otto family’s mistreated servants. Eugene took quite a liking to her, but she was eventually dismissed for supposedly practicing voodoo. I’ll touch more on that later. Before she left though, the servant gave young Eugene the doll as a parting gift.

Something is off here…

Mr. and Mrs. Otto often heard Eugene talking to Robert in the late hours of the evening, but they didn’t think much of it. Then they started hearing a second voice – a deep, monotone voice that only a grown man could produce. There was no way that ten-year-old Eugene could make his voice that low. The extra voice wasn’t the only off-putting occurrence, though.

One night, Eugene woke up suddenly to see Robert staring directly at him from the foot of the bed. Moments later, Eugene’s parents awoke to the sound of their son’s earth-shattering screams. They rushed to his room, flung open the door, and stopped dead in their tracks. Robert’s room looked as if a tornado had whirled through it. Furniture was overturned, broken toys were all over the floor, nothing was in its right place…except for one thing. Robert was sitting perfectly upright and unscathed in the corner of the room; he was the only thing that seemed like it hadn’t been tossed around. Eugene’s parents asked their son how this happened, and his only response was “Robert did it.”

While this incident left the family petrified, they didn’t take much action; they thought that things would eventually return to normal. Soon enough, though, the family noticed large, gaping scratches on Eugene’s bedroom walls. More incidents started happening, more furniture would be displaced, and more broken toys started showing up. Every time something bad happened, Eugene would say that Robert did it; he began blaming all of his mistakes on the doll. He started becoming more attached to Robert, too. Eugene never left the house without him; it was as if his best friend was a doll as large as him. His happiness depended on Robert.

As things got progressively worse with their son, Eugene’s parents decided to stop tiptoeing around the issue at hand. They took Robert away and placed him in their upstairs attic, hoping that things would return to normal or at the very least, calm down. They thought that if Eugene couldn’t see Robert, Robert couldn’t cause any harm. This was far from the truth.

The Otto family frequently heard loud noises and commotion coming from their upstairs attic, even when nobody was there. If they had guests staying the night, the guests would complain about hearing screaming, pounding, and heavy footsteps coming from the attic. If nobody was in the attic to make these noises, from where were they coming? To make matters worse, neighbors reported seeing a child-like figure pacing in front of the attic window at night.

Now convinced that Robert was haunted, Eugene’s parents brainstormed where this darkness came from. They speculated that the servant they fired for practicing voodoo had placed some sort of curse on Robert before giving him to Eugene as revenge for how she was treated by the Ottos.

As the years passed, Eugene gradually became less dependent on Robert. Now that he couldn’t see the doll anymore, he grew more independent and began doing things on his own; Eugene was finally able to live his life without a doll in his arms or on his mind. He eventually got married and was looking for a house to settle down in, when his father died suddenly. Part of Eugene’s inheritance was his parents’ house, which still had Robert locked in the attic. He and his wife moved into the house, and things seemed to be going well. At this point, Eugene was a successful artist and was doing great financially. He took care of the servants, kept up with monthly bills, and oversaw the plantation.

One fateful day, Eugene ventured into the upstairs attic, where he came face-to-face with his old friend, Robert. He strangely felt no fear around the doll, despite the fact that it was most definitely possessed. Since he didn’t feel that Robert was a bad thing, he brought him downstairs and proudly introduced his wife, Annette, to his favorite childhood possession. Annette was not a fan of Robert. She asked her husband to put the doll back in the attic, but he refused.

Part of the Family

A few months went by, and Eugene transformed back into his ten-year-old self. He grew extremely attached to Robert; he was obsessed. He brought Robert everywhere, put out an extra plate for him at meals, took him to work, and even had Robert watch him while he painted murals. Much to the dismay of Eugene’s wife, Robert soon became like a son to his owner. She thought her husband and Robert’s connection was not one of nostalgia, but of something sinister.

Things got so bad that one night, Eugene asked Annette if Robert could sleep in their bed with them. She was horrified, but Eugene persisted. He told her Robert had been begging him to let him stay with them at night. Annette then agreed to a compromise – Robert would stay in their room at night but he wouldn’t be allowed in the bed. From then on, he sat on a chair every night and watched the couple sleep. As time went on, Annette started suffering from horrible night terrors. Whenever she woke up from one the first thing she laid eyes on was Robert, which creeped her out even more.

Because of Robert’s unnatural presence, Annette and Eugene’s relationship began to fall apart, bit by bit. Annette felt as if Eugene cared more about Robert than he did about her. Robert was driving a wedge between her and her husband, and her husband didn’t seem to care. Any time they would go on a date, or just anywhere in general, Eugene would bring Robert along, which upset Anne. On the other hand, Eugene was frustrated that Annette didn’t like Robert.

Over time, Eugene developed uncontrollable mood swings. One minute he would be extremely angry, throwing things and shouting insults, and the next he would be extremely happy, going about his day merrily. Annette had never seen her husband act this way before; she was puzzled at his behavior. Eugene eventually became physically abusive towards Annette; he would often hit her during one of his angry mood swings. Unfortunately for Annette, this was the middle of the twentieth century, where divorce was relatively unheard of.

Eugene passed away in 1974, his house going up for sale shortly after he died. When the house was on the market, Robert was still inside of it. Since only neighbors and close family members knew about the doll, it hadn’t been moved at all. In 1976, a new family with a ten-year-old girl moved into the house. Soon enough, the young girl discovered Robert and the same thing that happened to Eugene began happening to her; she developed an unnatural obsession with him. She would feed the doll, bathe with it, take it everywhere…sounds familiar, right?

The young girl’s family took a different approach when out-of-place incidents started to happen, though. During the time this family occupied the house, the Satanic Panic had its claws latched onto the American people. The family, already being on edge about supernatural beings, immediately had Robert blessed by a priest. This blessing didn’t work, unfortunately; the family still heard a deep, monotone voice coming from their daughter’s room at night. They tried everything the Otto family did but to no avail. Locking Robert in the attic didn’t help, nor did blessings from religious leaders. They had to make a decision for the safety and well-being of their children and themselves – they had to get rid of Robert altogether.

Robert was eventually given to the East Martello Museum in Key West, Florida, which is where he still resides to this day. He can be found inside a glass box in the bottom basement of the museum and is a popular tourist attraction for horror fans visiting the area. Many of these visitors have had supernatural encounters with Robert. Some have goofed off, not taken things seriously, and made jokes about Robert, which they regret later on.

There are dozens of letters surrounding Robert’s glass case from people who have visited him and had their lives fall apart afterward. The letters are begging for forgiveness, profusely apologizing for insulting him. Some people even bring peace offerings to Robert, including food, candy, books, money, etc. Several museum workers have reported seeing Robert move in his box, which is odd, considering the fact that the box is completely closed off; there’s no way a draft of air could make its way into the box.

Robert definitely has something supernatural within him…