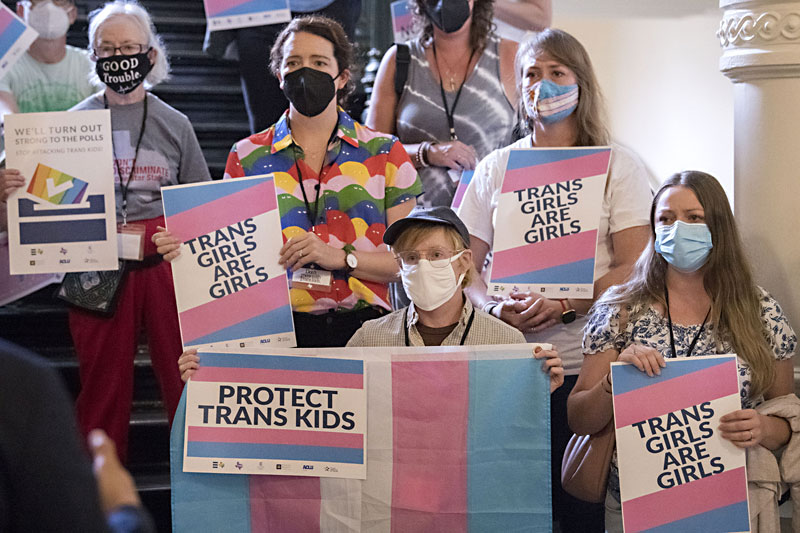 Texans advocating for HB 25 at the State Capitol.

Texans advocating for HB 25 at the State Capitol.

On January 18, 2022, a new Texas law, House Bill 25, is set to go into effect. This law, signed by Texas Governor Greg Abbott, restricts transgender student athletes from participating in school sports. It requires student athletes to play on teams that correspond with their sex assigned at birth, not teams aligning with the gender they identify as. The bill will affect student athletes K-12.

Signing this bill into law has been prioritized by Republicans and conservative lawmakers in Texas. In 2017, a similar bill targeting transgender youth was set to be signed into law, but it failed to pass legislation. This bill was known as the “bathroom bill” and caused a lot of controversy. The purpose of the “bathroom bill” was to regulate bathroom use and require transgender Texans to use bathrooms based on their biological sex.

Texas was not the first state to pass legislation affecting the transgender community this year. According to the Human Rights Campaign, at least 117 bills have been introduced this year that target transgender people. Thirty-one of those bills are similar to HB 25 in that they seek to ban transgender student athletes from participating on a team that aligns with their gender identity.

Texas state representative Valoree Swanson authored HB 25. Swanson said she was “overjoyed” at Abbott’s decision to sign the bill into law. Swanson believes HB 25 is necessary to “protect everything women have gained in the last 50 years.” She argues that the bill will ensure fair competition in girls’ sports. Many other supporters agree that the law is aimed at protecting young women.

LGBTQ+ advocates and Democratic lawmakers, like state representative Celia Israel, would argue that the bill is doing the opposite of protecting young women. Israel is a founding member of the Texas House LGBTQ Caucus, an assembly whose purpose is to advocate for Texans in the LGBTQ+ community. “We should be progressing in time with how we’re dealing with these issues but we’re not,” Israel said.

Mary Castle, Senior Policy Advisor with Texas Values, is a supporter of HB 25. She believes women’s sports are threatened by transgender students. “Whenever biological males compete in female sports, the biology just stands out,” Castle said. Castle believes when transgender girls compete in girls’ sports, you can tell their biological sex by their strength and superior performance. Another one of her concerns is that, “a biological male could be in a female private space.”

Various parents of transgender youth have begun to advocate for their children. For example, Karen Krajcer’s nine year old daughter is one of many being affected by HB 25. “It just keeps on happening, it’s ridiculous. This is the fourth round this year. Why are we still having to do this?” Krajcer said. Krajcer spoke at the Texas Capitol on April 12 to defend her daughter and other transgender youth. She and the hundreds of others at the capitol that day were all fighting to keep the legislators from passing laws they viewed as “harmful.”

With both sides deeming the other as “harmful,” HB 25 will continue to be controversial until supporters and those against the bill can strike balance.