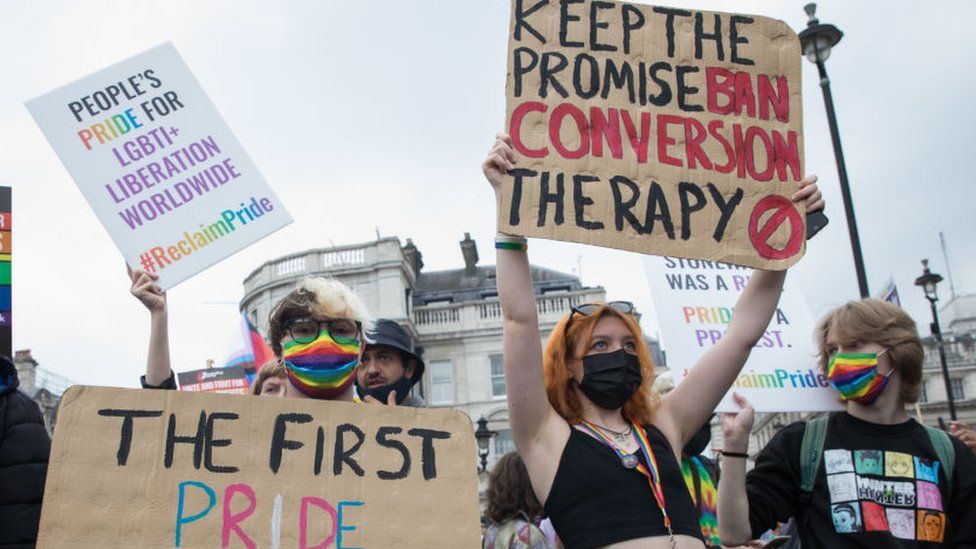 Activists at a conversion therapy protest in London.

Activists at a conversion therapy protest in London.

The United Kingdom first introduced the idea of a conversion therapy ban three years ago, but the government didn’t step into action until recently this year. It was announced in May that the UK government would propose legislation to end conversion therapy. Human rights activists have been pushing lawmakers to outlaw the harmful practice, so they can account for the rise in importance.

Conversion therapy, also known as reparative therapy, is defined by the Gay and Lesbian Alliance Against Defamation (GLAAD) as “any attempt to change a person’s sexual orientation, gender identity, or gender expression.” Despite being proven by medical health professionals that heterosexuality and homosexuality are both ordinary expressions of sexuality, some still believe homosexuality is a “mental illness.”

Victims of this unethical physical and mental therapy have shown numerous negative long term effects: depression, anxiety, drug and alcohol addiction, homelessness, and suicide. In 2017, the National LGBT Survey, a survey of around 108,000 who identify as LGBTQ+ in the UK,  offered evidence of the effects conversion therapy has left on the country. Five percent of respondents said that they have been offered conversion therapy, and two percent had undergone it. Although those statistics seem low, keep in mind it is a self-report survey and it is difficult for reporters to rely on self-selecting samples alone.

As of now, there is a six week government consultation focusing on how to legislate a conversion therapy ban. Although the new bills may not eliminate conversion therapies completely, they can restrict them. The government proposes to ban the harmful practices in England and Wales, but will still allow consenting adults to participate in the practice if they choose.

Liz Truss, the Minister for Women and Equalities, has been set out to protect the LGBTQ+ community from conversion therapy, especially those in the community who are minors. One of her main responsibilities as Minister for Women and Equalities is to promote equal opportunity for all. She is one of the activists who pushed lawmakers to put the legislation into effect.

Jayne Ozanne, a previous member of the government’s LGBT advisory panel, has direct experience with conversion therapy. She is in full support of the government consultation plan. However, she does show some concern because of “the loophole it creates by allowing adults to consent to these harmful and degrading practices.” She believes the consultation document fails to recognize the harm that conversion therapy causes.

Another activist who has been campaigning for a conversion therapy ban, Alicia Kearns, believes the consultation will protect the LGBTQ+ community from bigotry and those trying to make a profit off of the community’s vulnerability. Despite this, she is still unconvinced that any adult is willing to consent and engage in the abusive practice.

After seeing the results of a YouGov survey earlier this year, it’s safe to say the majority of the UK wants to abolish conversion therapy once and for all. According to the survey, approximately two-thirds of the respondents believe there should be a ban on all conversion therapies. Now, it’s just up to the UK government to decide what the next step is.