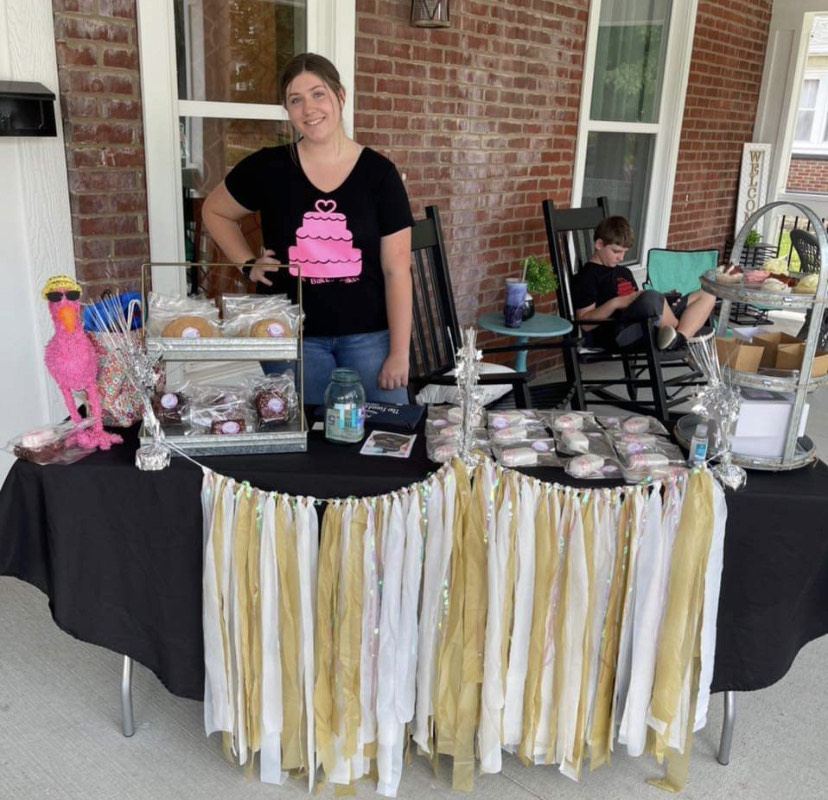 Ali Burnett poses with baked goods from her business.

Bake It ‘Till You Make It

Being an entrepreneur at any age can be difficult as you have to take on a lot of responsibilities and risks in order to make your dreams come true. The hard work and dedication that business owners put in every single day is second to none.

So, imagine being a young entrepreneur. Juggling high school and a social life is tricky enough as it is, and gets even trickier when you mix running your own business into it.

This is the reality for fifteen year old Ali Burnett, a sophomore at Martinsville High School, a football manager, and a dedicated student. When she is not fetching water for the players or working on homework, she runs an ever-growing baking business called Ali Bakes Cakes, which she started at age thirteen.

Burnett has been making and decorating cakes for close to six years now starting when she was in the fourth grade. Since then, she has had a lot of practice and gained immense patience, making her the baker that she is today.

Getting her business out there has been majorly successful. Her Instagram page (@alibakescakes_) has eight hundred and nine followers, and her Facebook page, Ali Bakes Cakes, has over eight hundred likes. However, that is not the only way she is being promoted. In July of 2021, Ali partnered with Michelle Keller at Brickhouse on Main, located in downtown Martinsville. Since her partnership, Burnett has seen even more success.

Her business first started out in her kitchen at home, but Burnett now bakes in the commercial kitchen at Brickhouse, taking about three to five orders per week. “It [partnering with Brickhouse on Main] has definitely helped me grow a lot. They have a lot of weddings here, so I usually bake for them,” said Burnett.

With an extremely busy schedule, Burnett tries to balance her social life, school work, and business in the best way possible. After school, she spends a lot of time baking and making orders. As for her friends, “Most of the time, I have to tell them that I have to work, but I try to keep them important,” said Burnett. She has a great support system between her friends, family,  and her biggest supporters – her parents.

As the years go on, Burnett hopes to continue baking. After high school, she plans to go to college to study business and get a feel for how to run an even more successful business. In the future, she hopes to open a bakery of her own.

To celebrate the holiday season, Burnett hosted three pop-up shops at Brickhouse on Main during the month of December. She was open on Sunday, December 5 for the Martinsville Annual Tree Lighting, Saturday, December 11 for the Holly Jolly event (a private, sold out event), and on Thursday, December 16 during the Third Thursday on the Square: Secret Santa Event.

Burnett will continue to make cakes for people during her high school years and will serve her customers with a smile. She is a perfect example of what it takes to be a young entrepreneur.