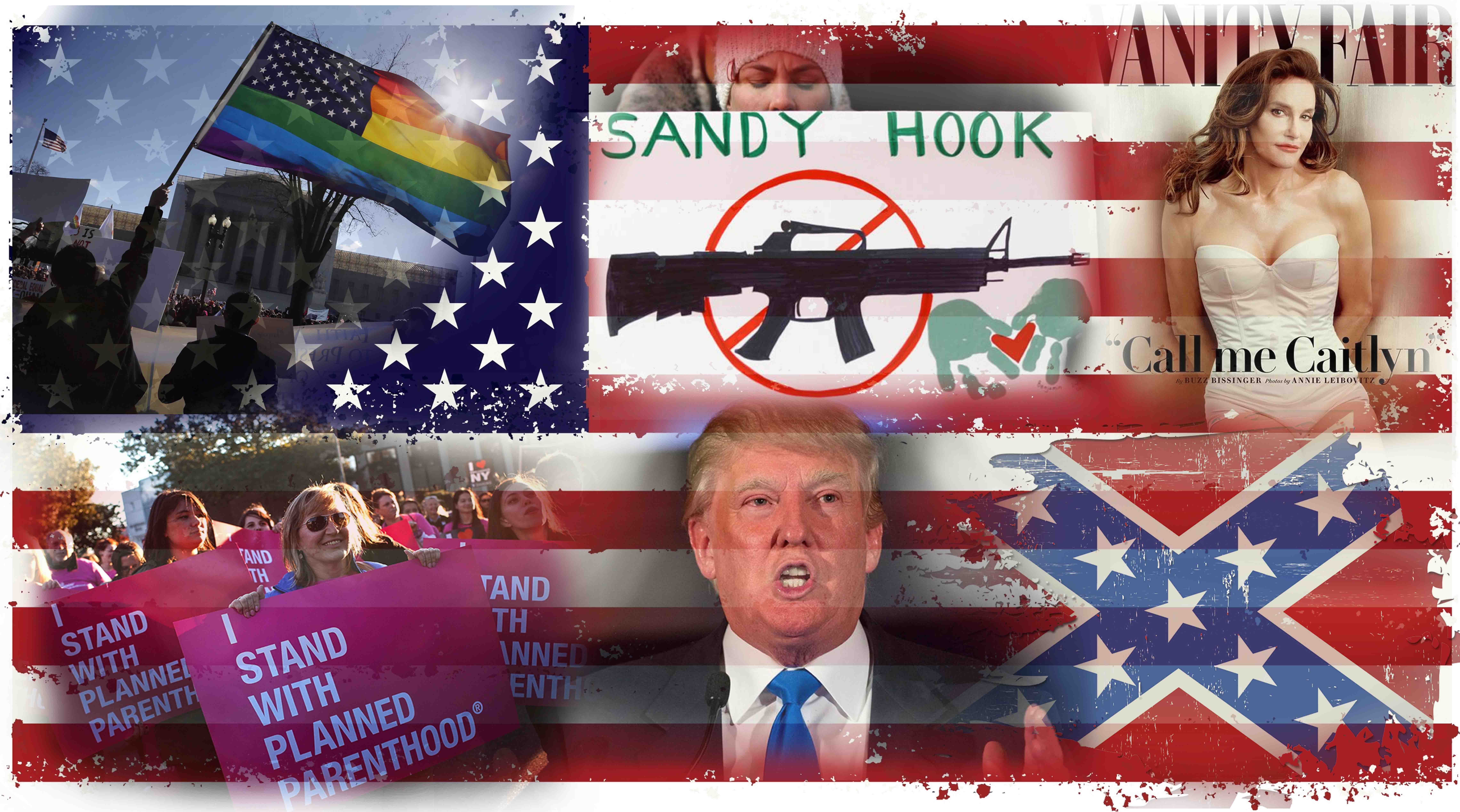 Land of the free, home of the offended

What happened in 2015 that you may remember? It’s highly possible you could reflect on spending a lot of time on your cell phone just scrolling through social media sites, and there’s a high chance that something more than likely offended you every time you scanned your screen, even if you were only on there for 15 seconds. Intentional or not, that is just how most people have adapted to be in our generation.

The problem, however, is not only internet based. Popular TV shows, hit songs, and even names of sports teams cause an immense amount of conflict and offense in everyone’s daily life. The simplest things are now causing vocal wars. Anywhere from Bruce Jenner making the transition to become Caitlyn Jenner, the legalization of same-sex marriage, and the ban of the Confederate flag in the United States, to the threats of stricter gun control…people everywhere were in a massive uproar, bickering back and forth. People, for some reason, tend to think that their single-minded opinion will truly make a law change, offend someone famous, or make someone change their views on things. That is hardly EVER what actually happens.

Nobody can joke anymore, and someone takes offense to nearly ANYTHING and EVERYTHING they hear/see. In our generation now, and 2015 in particular, people basically acted as if they have the right to not even listen to others’ opinions, which is absolutely ridiculous. To each his own, but I feel like if you cannot accept and respect another’s opinion or view on something, how could they respect and accept yours? I realize many people do not find topics such as politics, laws, new technology etc. joking matters, but if something does not directly affect someone, why could they not have a sense of humor and let themselves laugh? Nobody should be totally serious about everything 24/7 because there is so much in this world to laugh and smile about.

If a gay man can go to a live Kevin Hart show and hysterically laugh at a stereotypical gay joke, then those who are not gay should be able to laugh as well. If you have humor within what you are personally, then other people can partake and have a chuckle along with you because if others see you’re okay with it, they’ll be on board, too. If everyone opened their eyes and realized they can have a laugh at jokes focused around sensitive topics, this being offended over everything trend could vanish. We just need to learn that, most of the time, we are all laughing together, not at each other.

When someone laughs along with someone else, it is acceptable to poke fun at more sensitive topics because everyone has a mutual agreement that it is funny. Laughing along with someone could mean a cop laughing when someone asks him if he wants his daily share of Krispy Kreme donuts. If you found humor in a situation, other people may too. If you would get offended over these such things and someone other than you found humor in them, that would more than likely make you feel victimized, and like they are laughing AT you, possibly making you even more offended than you were in the first place. If maybe every now and then you laughed in the beginning and strived to see the humor in a situation, you could decrease how often you get offended over minor things. Common ground can be found if you occasionally meet in the middle.

If someone opens an internet browser and sees a trending blog on the Yahoo! homepage over gun control and regulations, chances are they will read it. If the blog, written anonymously as an opinion piece, does not fit in exactly with their opinion, the possibility exists that they will get ticked off and scroll to the comment section to make a negative comment directed toward the author. Why not just move on? If their opinion on the topic was so strong that they took the time to compose a blog over it, chances are a little hate comment won’t be turning their mindset around. There is no need to get offended over someone’s opinion that is not directed toward you or affecting you in any way at all.

The simplest things offend people, too. Take a moment to think of situations you often see your peers get offended by… a girl wearing a band shirt when she doesn’t know every single one of the band member’s names, someone typing illiterately on Facebook specifically to look “cool”,  even those “only 90’s kids will remember” memes… what point is there to getting mad over petty little things? It won’t do any harm to someone for holding in a comment stating they were “born in 2000 and watched those TV shows too.” More often than never, it is so much easier to just observe and move on rather than pointlessly ranting.

When same-sex marriage became legal in the United States, it was entirely unbelievable how the nation reacted. Some of the religious community was offended and strongly against this law being passed, but the question still remaining is… Why? Bakeries were rejecting business from any of the LGBT community and refused to make them wedding cakes because they were offended that people any different from them could have the same rights as straight married couples. Married couples even got divorced because they were offended about the simple fact that same-sex couples could have legal commitment now just like they had.

Getting offended to the point where one changes a major aspect of their life is completely ridiculous. How does two men getting married affect somebody’s views on their own marriage at all? How could they possibly get offended over two women wanting a nice wedding cake from their bakery for their special day? In all reality, these scenarios have no effect on someone outside of the situation or how they live their life, so why bother getting overly-sensitive or offended?

Although it’s someone’s natural reaction as a person to let everything you see, read, and hear anger them or offend them in some way, they CAN eliminate a lot of the bickering and start having a sense of humor. Next time someone feels the rage forming, they should just try to find some humor in the situation, or let it go.

I’d like to see a world where everyone can laugh together and be able to have find humor without someone getting rubbed the wrong way. The internet, our favorite TV shows, and even songs would all be affected by this. Everyone could laugh at that episode of Family Guy when Peter Griffin makes an offensive joke, or could listen to that song even though it includes profanity or vulgar language. We could all just in general let most things go, respect each other’s opinions, smile, and laugh it up… no offense included.