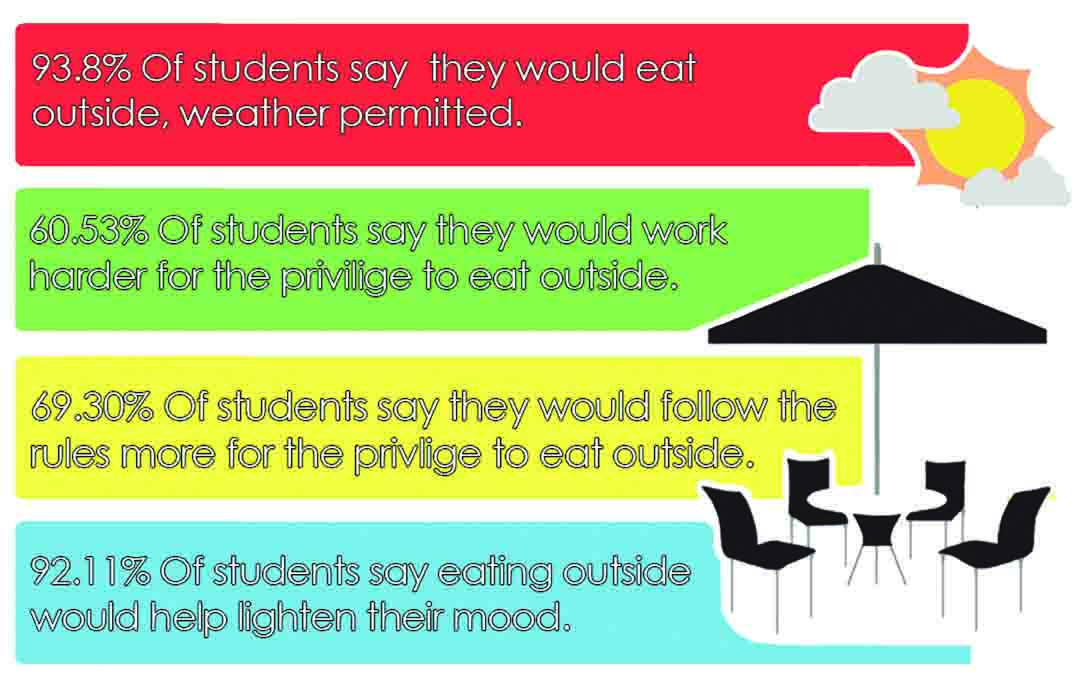 It’s a beautiful day outside. The sun is shining, and the people of Martinsville are out and about. Or at least that’s what you can tell from the window of your Algebra class. You wish you could be outside taking in the fresh air and sunshine, but you instead find yourself sitting, bored beyond belief, breathing the same stale air. If only there was a way you could get some time outside. Well, thanks to Dr. Sears and the rest of Martinsville High School’s administration, you might just find a way.

Word has been going around that Martinsville High School will be getting a new patio. Constructed out of concrete, with a rod iron fence and concrete picnic tables to match, the patio will provide the perfect escape a student needs during a hard day of school. Students will be able to access the new patio through a door that will be in the cafeteria.

The patio will be available for everyone during their lunch period, and every student is welcome.”

When asked where the idea came from, Principal Dr. Nick Sears said that it came from other schools, and the idea sounded just like what MHS needs. “Though sometimes it may not seem like it,” said Sears, “we’re always thinking of something better for the students.”

Sears plans to have the patio built by mid April with the help of the maintenance staff. By implementing this patio, Sears hopes to boost student morale and bring a feeling of freedom to the student population.

However, the question stands: will the patio even be used? “I’d definitely use the patio,” said Junior Walker Fisher. “I’d love to go outside and get some fresh air, sometimes I just feel like a caged animal in…school.”

The Artesian Herald conducted an anonymous survey to randomly selected classrooms. Of the 114 students surveyed, 93.8% said they would eat outside given the option. Sixty point five three percent said the privilege of eating outside would give them an incentive to work harder in school. Sixty nine point three zero percent of the respondents said that the privilege of eating outside would incentivize them to follow the rules more in school, and 92.11% said that getting some fresh air and sunshine would lighten their mood.

Junior Jackson Schaefer said, “I think a patio would be a great idea! It would be an awesome addition to MHS. Instead of sitting indoors all day, kids could go outside and take in the atmosphere.”

Perhaps this is what MHS needs. Maybe students do need some time outside, just like the good old days. The days when recess was still a thing and we could run rampant on the playground. Those precious minutes allowed us to put school away and release our frustrations, even if just for a little while.

Expect to see construction outside of MHS by mid April. Whether you’re going to use it or not, be prepared to see classmates eating outside before the year is out.