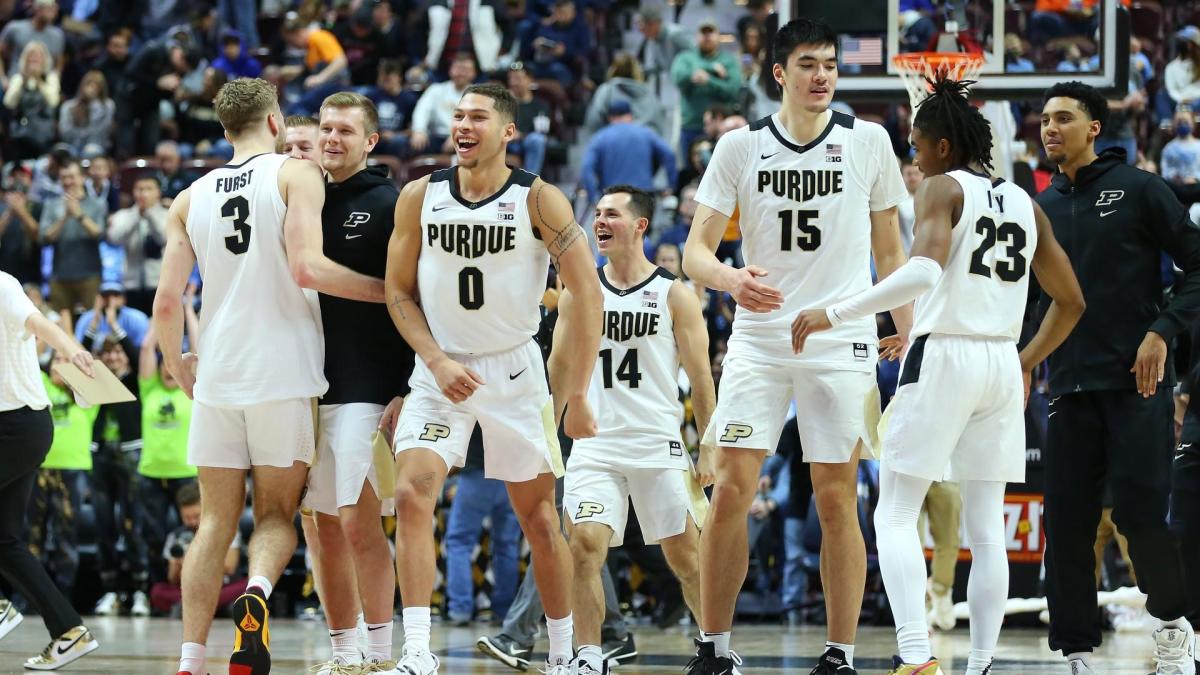 Purdue Basketball: Can They Keep Up the Good Work?

Boilermaker fans across the country created an uproar after the Purdue Men’s Basketball team jumped into the number one spot on the NCAA AP Top 25 poll for the first time ever. However, their No. 1 standing did not last very long.

On December 3, 2021, the No. 2 Purdue Boilermakers took on the unranked Iowa Hawkeyes at Mackey Arena for the Big Ten Opener. Going into the game, both Purdue and Iowa were 7-0 on the season. It was destined to be a tough match up, and it was, with Purdue almost blowing the lead in the final minutes of the game. Iowa came back from a 19 point deficit, and with less than three minutes remaining, only trailed 72-70.

For a team who has consistently had a good basketball program, with 380 weeks spent in the AP Top 25, it is surprising that they have not had the power to make it into the No. 1 spot before. So, what is to blame for Purdue’s power this season? The answer lies with sophomores Jaden Ivey and Zach Edey.

Purdue is led by emerging NBA prospects Jaden Ivey and Zach Edey who have improved tremendously since last season. Ivey is currently averaging 15.9 points, 5.8 rebounds, and 3.6 assists in 27.5 minutes per game. Edey is averaging 15.5 points, 7.1 rebounds, and 1.4 blocks in 18.5 minutes per game. With these stats, they are arguably the best inside-outside duo in college basketball currently.

Purdue is a powerful team with a lot of potential. So, what went wrong in their match up against Rutgers on December 9th? Let’s break it down.

On December 9, 2021, No. 1 Purdue took on unranked Rutgers at Jersey Mike’s Arena. Many Purdue fans and supporters saw this as an easy matchup, foreseeing a win in the future. However, that was not the reality for the Boilermakers.

With a strong start to the beginning of the game, Purdue began to crumble in the final seconds of the game. With 20 seconds on the clock, Purdue’s Jaden Ivey became trapped with the ball and tried to walk through his defenders, resulting in a traveling call that gave Rutgers the ball.

The Boilermakers were then down 67-66 in the final 4 seconds of the game when senior forward Trevion Williams made a layup, leading the Boilermakers to a 68-67 lead. However, the game is not over until it is over. After the shot from Williams, the ball was inbounded to Rutgers’ senior forward, Ron Harper Jr., who dribbled the ball across the half court line and shot a buzzer beater. Rutgers would win over No. 1 Purdue, 70-68.

So, how did Purdue blow this game so quickly? It’s simple; this team was built to go 10 deep, and that is not how they were playing. The trio of Jaden Ivey, Zach Edey, and Trevion Williams was their main source for offensive production. When you can only rely on three players to produce shots, it most likely will not end well.

By halftime, Purdue’s trio had made 32 of the 35 points scored. Later in the game, we would see offensive contributions from Sasha Stefanovic, Bradon Newman, and Eric Hunter Jr., but it would not be enough to bully Rutgers into a loss. The trio had 49 of the 68 points scored by Purdue at the end of the game.

Defensively, Purdue just could not stop Rutgers’ Ron Harper Jr.. Harper burned his defenders at every single angle, and he did it against three defenders. The power from Purdue’s Mason Gillis, Caleb Furst, and Ethan Morton were just not enough against Harper. No one could stop Harper, but Morton slowed him down and made him work for his points, which he can be commended for.

In Purdue’s next game, they took on North Carolina State at PNC Arena. Rallying after their tough loss to Rutgers, the Boilermakers stepped up their game both offensively and defensively, resulting in an 82-72 win over the Wolfpack.

After spending one week in the No. 1 spot on the AP Top 25 poll, Purdue has since moved to No. 4 in the poll. Their intensity and drive continue to grow each game. As the season continues, it is no question that the Boilermakers will be a fun team to watch.