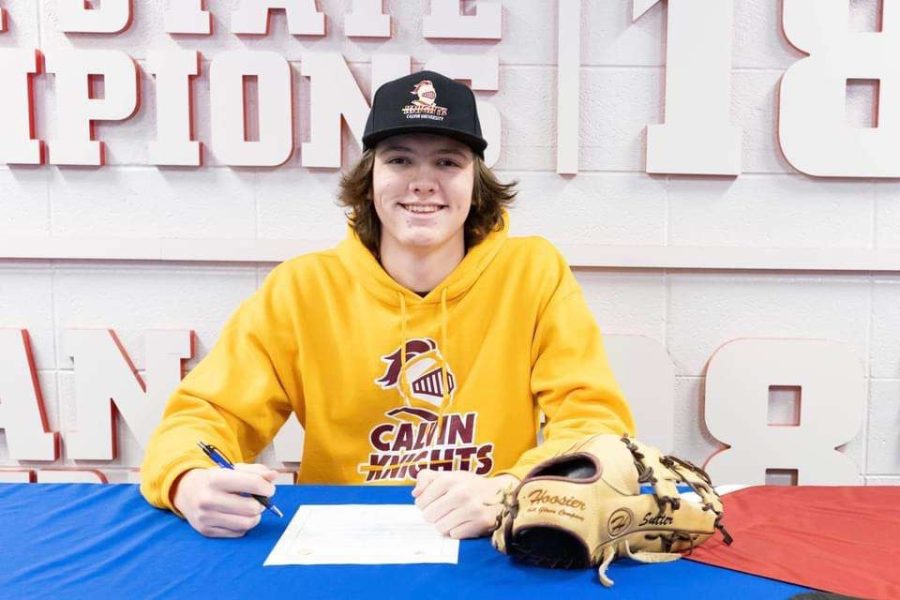 Martinsville High School senior, Levi Suter, is a prime example of the saying ‘hard work pays off.’ After many years of dedication to the game of baseball, Suter committed to Calvin University in Grand Rapids, Michigan. It has been a long journey full of ups and downs, but the reward has been worth it all.

For the past fourteen years, Suter has worked on perfecting his craftsmanship, bettering himself in every aspect of baseball. From leadership skills to drills, and everything in between, he has worked diligently to ensure that he plays to the best of his ability. This type of work ethic has allowed him to receive many opportunities – one of them being the ability to play college baseball.

At the beginning of his senior year, Suter was invited to Calvin University for an official visit, and was in awe of the campus and the possible opportunities, leaving him with a big choice to make. “Calvin has a coaching environment and a family environment that is top notch,” said Suter. “It truly felt like home.”

After a lot of thought and consideration, he made the decision to officially sign with Calvin on December 8, 2021, in the presence of his family, friends, and coaches. This significant moment marked not only a major reward but the beginning of a fresh start as well.

Though the opportunity to play college baseball is tremendous, it can be nerve-wracking moving to a new city in a new state. However, Suter feels confident in his future, saying, “I’m excited to be on my own for a little bit. I think it’s necessary for me to get away from my family, learn how the world works, and just learn how to be self-sufficient.”

However, his yearning for a sense of independence does not stem from a lack of support from those around him. Over the years, he has had support in every corner. Whether it be from his fellow teammates, friends, family, or coaches, he has recognized their words of wisdom, constructive criticism, and friendly encouragement. “My mom and dad are my biggest supporters. They have been there every step of the way. They keep me on my toes, but I wouldn’t be able to do this without them.”

With his leaving, it is safe to say that his presence on the baseball team at Martinsville High School will be missed. Sophomore Nolan Stantz says, “He always tries to bring positivity to the group and tries to ensure that everyone feels a part of the team.”

As he finishes his last high school baseball season, he is reminded of the memories, opportunities, and life lessons that the game of baseball has brought him. “Baseball has taught me that hard work and dedication pays off. I have put in a lot of hard work, and it has allowed me to go to college to play baseball and get some of my education paid for, and hopefully allow me to pursue a career,” said Suter.

In the fall of 2022, Suter will head to Calvin University to begin his college career as both a student and a pitcher for the baseball team. We wish him nothing but success.