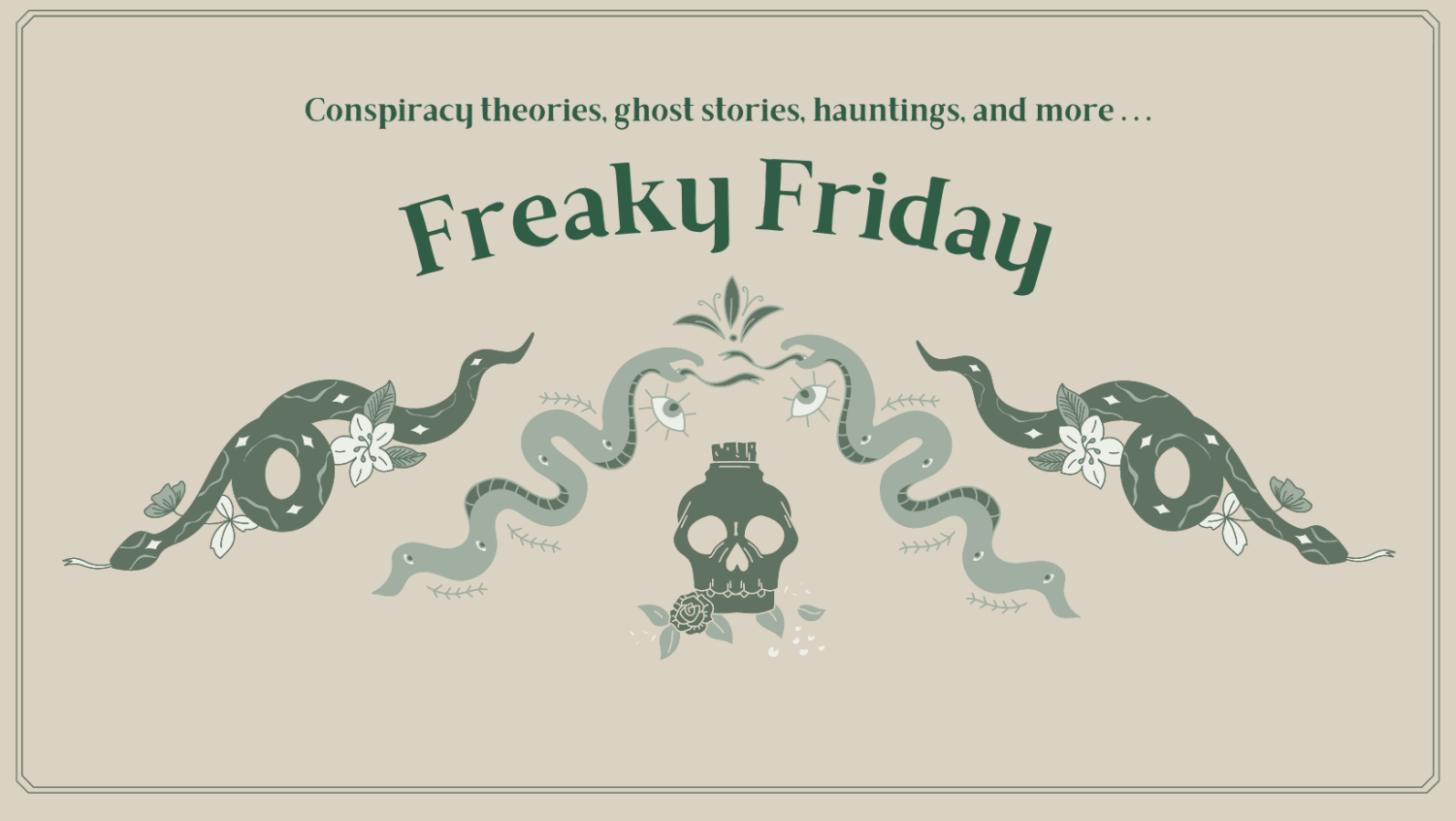 You’re at a sleepover at your closest friend’s house. You are all playing an intense game of Truth-or-Dare, consisting of girls asking who their crushes are or other equally mundane things. All of a sudden, you get dared to do a very specific ritual. The Bloody Mary Ritual. A chill goes down your spine as you find a candle and a match, and make your way to the nearest bathroom. You proceed to light the candle and turn off the lights. Looking in the mirror, you utter a phrase thirteen times. “Bloody Mary”. Once the task is complete, you scream in horror, for the reflection in the mirror isn’t your own.

Bloody Mary is one of the most common and talked about urban legends today. It’s a ritual that is typically performed at sleepovers. How the ritual is performed can vary, from the number of times you say “Bloody Mary,” to whether or not you will turn around in a circle while you say the words. Some people even add the words, “I stole your baby” or “I killed your baby.”

The appearance of the figure will also vary depending on who you ask: ranging from a witch, corpse, or a spirit. The figure is also typically covered in blood, hence the name “Bloody Mary.” There are also other names that the figure goes by, such as “Hell Mary” or “Mary Worth.” People who are unfortunate enough to summon her will face terrible fates, such as being choked by Mary, being screamed at or cursed by her, having their souls stolen, or, and  most common, having their eyes scratched out. The scariest of these consequences is letting Mary free from the mirror, giving her free reign to let her haunt you for the rest of your life.

There is an earlier version of the ritual that was historically performed before the modern version of it. This ritual had a girl walking backwards up a flight of stairs while holding a candle in one hand, and a hand mirror in the other. When they looked into the mirror, they were supposed to see their future husband’s face looking back at them. However, there was a chance that when they looked in the mirror, they could see a skull, which would mean that they would, unfortunately, die before they would ever be able to marry.

There is a theory that seeing Mary’s bloody figure isn’t a work of spirits and ghosts, but instead can be explained by hallucinations. Apparently, staring at a mirror inside a dimly lit room for an extended period of time can cause people to have hallucinations. The type of hallucination it could be is called “strange-face illusion,” which can cause facial features to become distorted. “Strange-face illusion” is also a consequence of “dissociative identity effect,” which can cause the brain’s facial-recognition system to backfire.

There has been lots of speculation on who the sprite of Bloody Mary belongs to. People have looked into all corners of history to try and identify her, and they have narrowed the list to one of two women.

The first, and most commonly accepted woman believed to be Bloody Mary, is Queen Mary I. Mary Tudor was born in 1516 to King Henry Vlll and Catherine of Aragon. She grew up as a princess until Henry divorced Catherine, married Anne Boleyn, and broke away from the Catholic Church, causing Mary to go from a “princess” to a “lady.” Mary didn’t acknowledge her parent’s divorce or her father’s title as head of the England Church until 1536 when Henry executed Anne and married Jane Seymour. After that, Mary was welcomed back to the England court.

After her father’s death, her younger half-brother took the throne for a period of six years. After which, he left the throne to his cousin, Lady Jane Grey. Mary, wanting to fight for what she thought was rightfully hers, stayed in England and fought with noble supporters from all across England and took the throne, earning the title Queen Mary I.

During her reign, Mary tried to produce an heir and was thought to have been pregnant in September 1554. During this time, the British Parliament passed an Act that would make her husband, Prince Philip of Spain, Regent if Mary were to die during childbirth. There were false rumors that Mary had given birth to a child at the end of April 1555 the following year, and during May and June of 1555 rumors began that Mary was not actually pregnant. She continued to have signs of pregnancy until July of 1555 when her abdomen withdrew. It is believed that the reason for the false pregnancy was because of her great desire for a child.

Upon taking the throne, Mary ruled for five years. During her reign, she converted England from Protestant back to Catholic. In one of her most vile and controversial acts, Mary ordered the death of over 280 Protestants by burning them at the stake. This act earned her the nickname  “Bloody Mary” from Protestants and is most likely why so many people believe that Mary Tudor is the spirit of Bloody Mary.

Elizabeth Báthory was a Hungarian noblewoman who was born on August 7, 1560, to Baron George Vl Báthory and Baroness Anna Báthory. When Elizabeth was a child, she suffered from a number of seizures that were believed to be caused by epilepsy. Because of her noble birth, she was able to grow up with wealth, a good education, and a distinguished social rank.

It’s speculated that she was trained to be cruel by her family, which includes witnessing brutal punishments made by her family to participating in Witchcraft and Satanism. These claims explain why Elizabeth did all the things she would later do. There is no hard evidence for these claims though, so these rumors are debated.

Elizabeth gave birth to her first child at the age of thirteen, before she was even married. The father was said to have been a peasant boy. The child was given to a woman who was trusted by the Báthory family, who took the child to Wallachia and was paid to take care of the child. After Elizabeth was married, she had five children, one of which died as an infant.

The reason Elizabeth is rumored to be the Bloody Mary spirit is that it’s said that, in life, she tortured and killed hundreds of girls and young women. It’s also said that she showed vampiric tendencies and both bathed in and drank the blood of her victims because she believed the blood of young girls would preserve her youth. All of this cruelty has given Elizabeth the name “Blood Countess”.

“Bloody Mary, I killed your baby”

There are two extra sayings that can be used to summon Bloody Mary. These extra sayings involve either kidnapping or killing her baby. Perhaps this is because of the spirit of Bloody Mary’s experiences with childbirth and children.

Mary Tudor wanted a child so badly that her body faked a pregnancy for a baby she didn’t end up having. If she is the spirit of Bloody Mary, it would explain why saying, “I killed your baby” or “I stole your baby” would make the spirit angry at the person that hurt her unborn child, causing her to appear in the mirror.

Elizabeth Báthory had her first child in an affair with a boy who had a lower status than her. The baby was later taken from her right after she was born and given to someone else. Elizabeth also had a child with her husband later in life that died, as an infant. Both instances would cause Elizabeth to come after you.

The legend of Bloody Mary has many variations and mystery surrounding it. As seen above, the women that are rumored to be the soul of Bloody Mary have many rumors and horrors that cover them and cause their legacies to live on forever. The fact that they could be Bloody Mary only makes them more popular.

Today, Bloody Mary has several book and movie adaptations, as well as having a drink named after her. It’s not just the Urban Legend that is popular. Both of the women have multiple articles and documentaries dedicated to them. It’s also said that Elizabeth Báthory was one of the inspirations behind Bram Stoker’s “Dracula”.

This is where our story ends. Is Bloody Mary just some scary story that kids and teens use to keep each other up at night, or is this a real case of a spirit coming back from the grave to take her last chances of revenge? This is a legend that is likely to stay a mystery until the end of time.