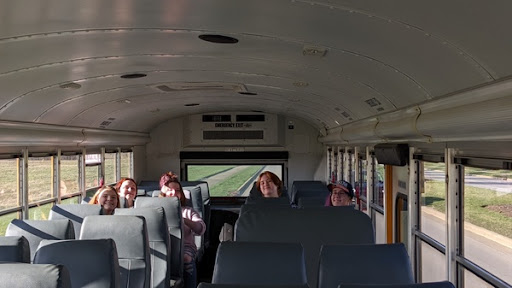 Anime Club on the bus ride back from a fantastic anime. (Mellissa Cary )

Anime Club on the bus ride back from a fantastic anime.

Trip to the Movies

Anime Club has Field Trip to the Movies

On Sunday, April 3rd, the Anime Club went on a field trip to watch Princess Mononoke. I was able to interview the other people who went on this trip to get their opinion on the movie.

The first person I interviewed was Lizzy Zike. She said that it was a good movie, but there were a few weird parts. I agree that the movie is good, but there were also a few parts that didn’t really make sense.

After I finished interviewing Lizzy, I interviewed Conner Greensweight and he said, “It was a good movie, I liked the ending and think more people should watch it.” The ending of the movie is really good and is definitely the best part of the movie.

I also interviewed Katelyn Dyer and she said, “I liked the movie, it had a really good storyline and the animation was very pretty. I think it showed good character development and put some issues in a softer light. Overall I really liked the concept and would recommend it.” I agree with this statement. Some of the characters and events would normally make you hate them, but the way that the movie progresses makes it so that they end up being shown in a good light.

The final person I interviewed also wished to remain anonymous, but she said, “The movie itself is extremely well wrote. I also think they remastered it very well. My favorite part was when the guy he saved thought his arm was healed and got excited and hurt himself again. It’s really long, but I would recommend people to watch it.” I agree that Kohroku thought his arm was fixed, only to find out it was not, which was really funny and one of my favorite parts.

I was also able to get our teacher’s opinion. Mrs. Mellissa Cary said, “I’m definitely a fan of Princess Mononoke!  It’s pretty high up there on my list of fave anime films. It emphasizes environmental themes of balance and conservation that are close to my heart, particularly because I teach earth science and environmental science and have a passion for nature. The plot includes elements of the classic hero’s quest as well as a variety of interesting characters and plot quirks. The ending is mostly satisfying.  It seems kind of weird that they want to start Irontown all over again after everything that happened, but I feel like the viewer is still left with a hopeful feeling. The artwork and music in the movie are lovely and make for a good sensory experience.  The animation is pretty smooth, particularly when it comes to people and animals moving, battling, etc., which is not always super realistic in anime. As far as dubs go, it’s not a bad one. There are some top actors involved. Occasionally the tone or choice of words makes it feel like something is lost in translation, but the dubbing is still pretty good in general. Overall, I find it to be a visually pleasing movie with a decent plot and important themes.  I’m sure it won’t be the last time I watch it!.”

In my opinion, this is an incredible movie and if you are interested in watching new anime movies or just watching your first one, this is definitely one you should go and check out. It has an amazing plot and is constructed beautifully. It is definitely one of my favorite movies.