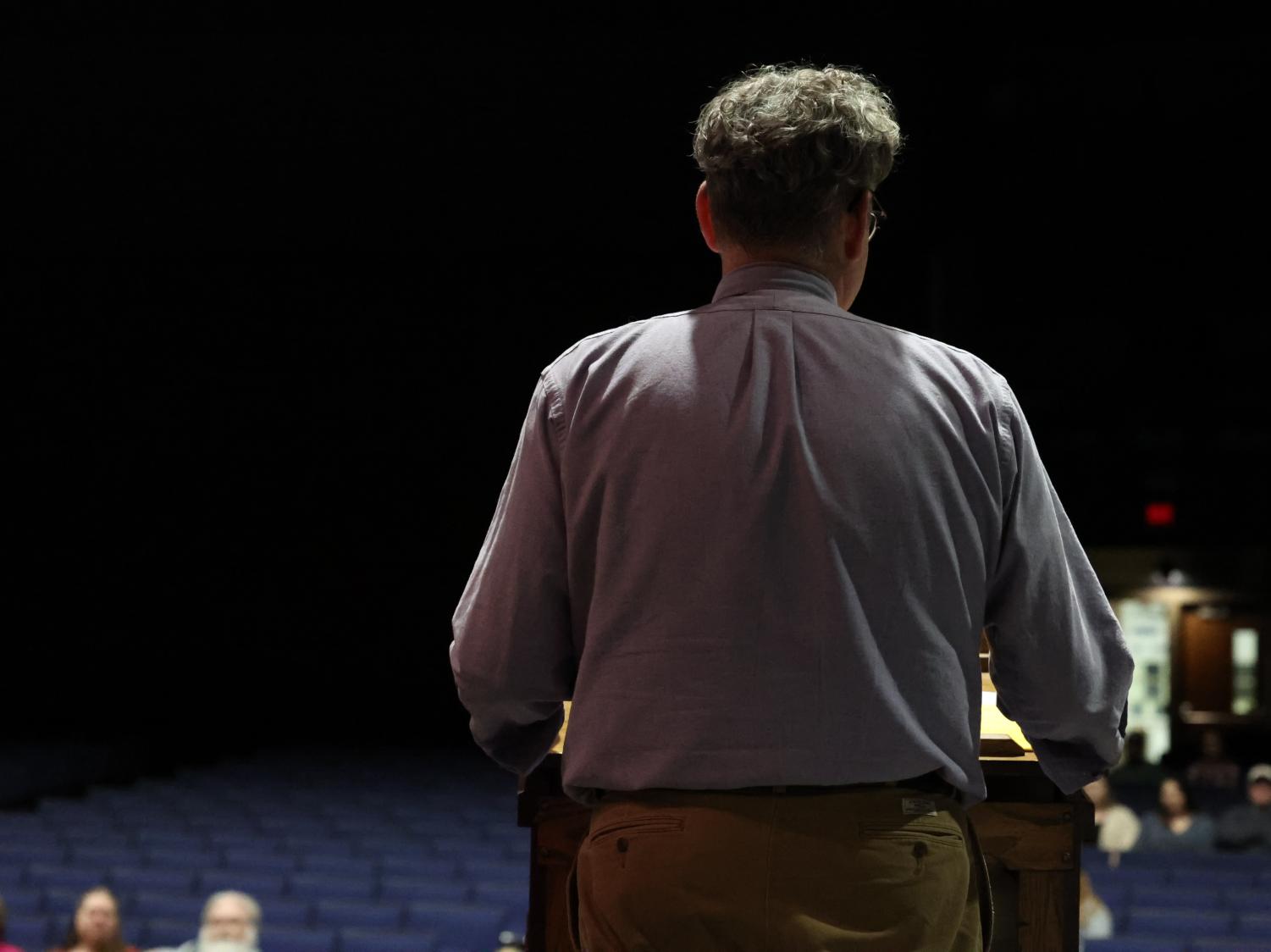 Mr. Rick Armstrong gives a speech at the Thespian induction.

After 33 years of teaching, Mr. Rick Armstrong announced that this year would be his finale at MHS. Known most for his involvement in the theatre and for being the science department chair, Armstrong has made a lasting impact on Martinsville High School.

Born at 10:59 pm on April 8, 1966, Guy Frederick Armstrong debuted into the world. Armstrong spent the majority of his childhood in Bloomington, Indiana, before moving to Morgantown in 1977.

He attended Fairview Elementary in Bloomington from kindergarten through most of fifth grade, before moving to Morgantown Elementary for a few months and then graduating from Indian Creek High School. He then went on to attend Indiana University, and with the help of small on-campus jobs, as well as department store employment, he managed to graduate debt-free while receiving two degrees from IU: a Bachelor’s in Science Education, with a major in chemistry and a minor in biology and mathematics and a Master’s of Arts in Teaching in general sciences, as well as obtaining additional credits beyond that.

Armstrong began his theatrical career in high school where he debuted as the baritone in the barbershop quartet in The Music Man. He describes this casting as an “accident”, going on to say that after discovering his vocal talents in elementary school, he always wanted to be a part of theatrical performances, but could never participate as his church schedule always interfered with play practice. Fortunately for him, a series of events led to his eventual casting. First, the play was postponed; second, the original baritone dropped out due to basketball; finally, the director, familiar with Armstrong’s singing, approached him regarding the part.

From there, Armstrong fell in love with the theatre, finding joy in all aspects: lighting, costuming, directing, and acting. He has been involved in many productions for several theatres, both professional and non-professional, most notably the roles of Bellamy in The Fantasticks, Max in The Sound of Music, Harold Hill in The Music Man, and Prince Charming in Cinderella.

Armstrong began his official teaching career at MHS on March 19, 1990 at the age of 22. However, he student-taught the year before, helping out with casting, set construction, and production for The Sound of Music. Next, he designed and constructed the set for Anastasia, starring MHS’s very own Mr. Mark Yount as Bonine. He then went on to help design and construct the set for The Wizard of Oz, also featuring Mr. Yount as the Scarecrow.

Since then, Armstrong has directed and designed the set for many plays over the years here at MHS, including his third production of The Music Man, starring Mr. Matt Smith as the scheming Harold Hill. Armstrong has built up quite the resume at MHS, directing some incredible shows, some of his favorites being Scrooge! The Musical (with MHS being the first non-professional production to hit the stages in the United States), Arsenic and Old Lace, The Sound of Music, Clue! The Musical, and even giving a shout-out to his current, and likely final, show at MHS, The Iliad, the Odyssey, and All of Greek Mythology in 99 Minutes or Less.

Armstrong had several motivations for retiring: being old enough to retire, yet still young enough to do new things, wanting the free time to be able to perform again, and yearning to be with his family. In his newfound free time, he plans to spend more time with his family, specifically his husband, Brian, his golden retriever, Sunny, and his newly born granddaughter, Liv. “She is cute and adorable and you just spend time because you start realizing how fast life is really going and it makes you realize that there is a new generation coming and you want to spend time with that person.”

Some other projects Armstrong plans on taking on post-retirement include house renovation and writing a series of children’s books with his husband about a granddaughter with two grandpas.

After around 100 opening nights, several generations of students, and two smokey incidents within one week, Armstrong is prepared for his final bow here at MHS, giving this final piece of advice: “No matter what you do, be a good person and be happy doing what you’re doing, whether it be a doctor, lawyer, performer, or a costume designer for theatres — whatever it is you’re going to do, enjoy it. I hope I have planted seeds in people’s minds that grow into lifelong adventures.”