Women’s sexual assault statistics reveal one in five women on a regular campus has been sexually assaulted. In male cases, one in ten males gets assaulted. Those are both excluding robberies, murders, kidnappings, etc. Many women who are assaulted in their college years are between the ages of 18 and 24.

In 2014, when the White House explored the issue, President Biden announced, “We know the numbers: one in five of every one of those young women who is dropped off for that first day of school, before they finish school, will be assaulted, will be assaulted in her college years.” Note that the research was only supported by two universities. One is located in the Midwest and the other in the South.

Researchers also used a web-based survey that consisted of 5,446 undergraduate women (ages 18-25). The survey consisted of 1,073 women (19%) who have either experienced assault or an attempted attack. 14% were confirmed assaults and 12.6% were attempted attacks. Unfortunately, according to the National Institute of Justice, any form of sexual assault is one of the most unreported crimes. More than two out of three attacks have been kept hidden. This doesn’t include the 32% of nonstudent females (same age) who do not make a report. 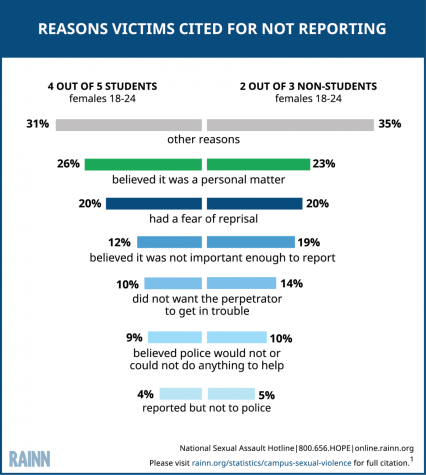 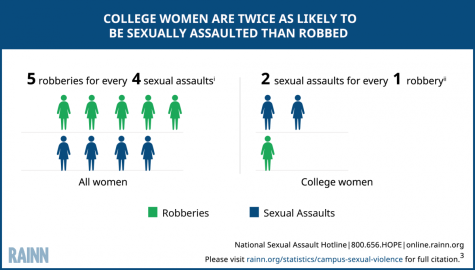 The aftermath that lay on women’s shoulders has caused issues such as drinking and/or self-medicating and experiencing problems like shame, social isolation, PTSD, flashbacks, eating disorders, etc.

Survivors have taken action into their own hands by raising awareness of the topic. A former college student, from a Scottish university, is running an Instagram account dedicated to anonymous victims’ stories. One said, “Once at the house he offered me a glass of water, which I drank. We walked around the house a little chatting about nothing in particular when I started to get dizzy. He told me I should sit down, so we went upstairs and he pushed me onto his bed and started removing my clothes. I said no over and over but he kept going. Then I realized how weak and dizzy I had been feeling and I couldn’t really fight back. He raped me …”

Of course, alcohol and other substances have come to play in these situations. Due to this, there have been precautions and strategies for women. There have been apps made like “Watch Over Me,” “Circle of 6,” and “bSafe.” People have even made self-defense keychains. It is sad to say that these numbers do not conclude the percentage of females who have already been assaulted while not in college.