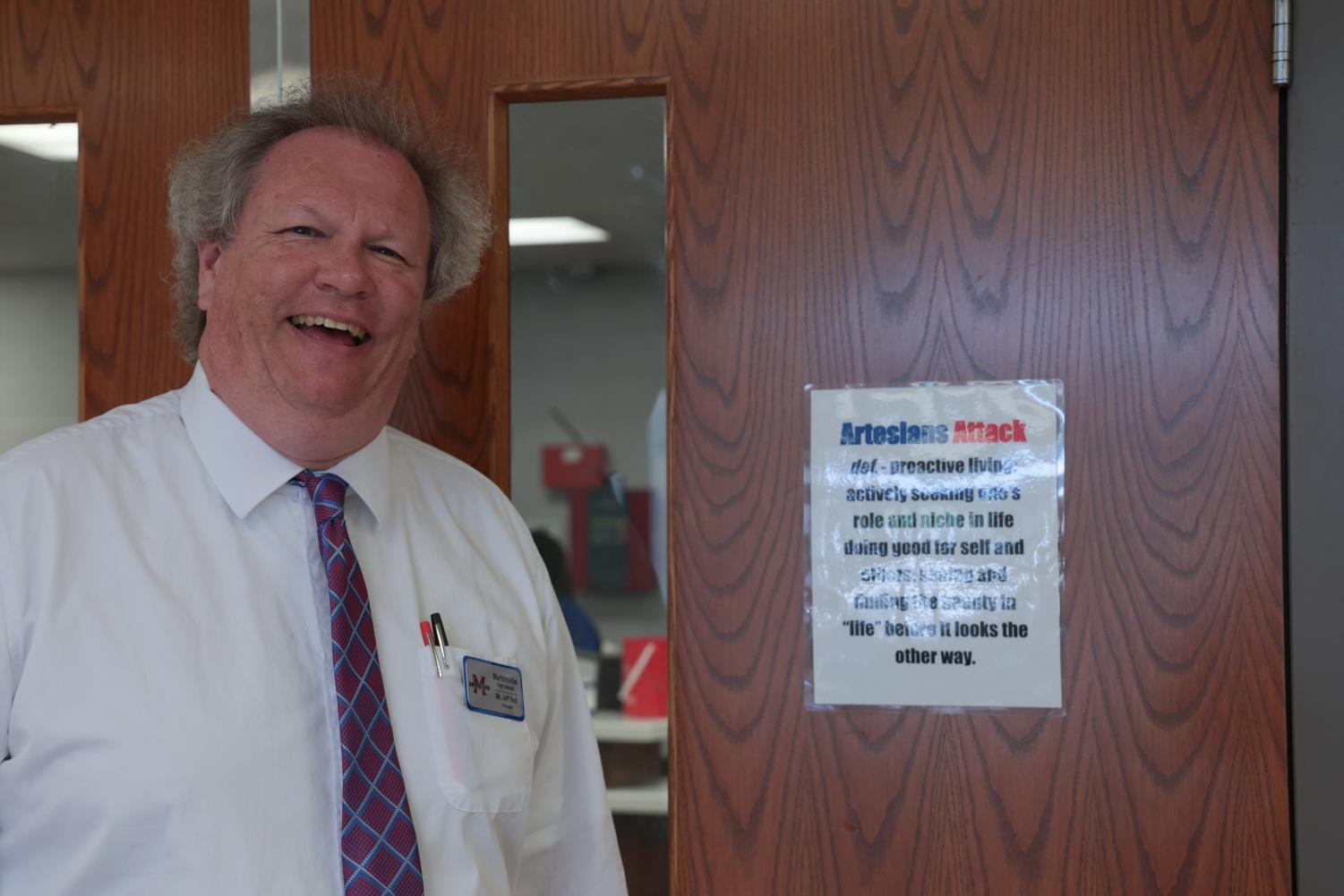 This year, Martinsville High School has a new principal, Jeff Bell. Since he has been here, he has been very open about his ideas for hyping up the student body, including his Artesians Attack plan.

In the few days that Mr. Bell has been principal, he has already started to make an impression on the student body. Every morning during announcements, he has said the now iconic line, “Get there, get there, get there”. Mr. Bell uses the phrase to motivate students and start the day off with some extra energy. Whether students like this energy in the morning, or would rather go back to sleep, everyone finds themselves quoting that line throughout the day.

Along with the ‘Get there’ quote, Artesians Attack posters can be found in every hallway, highlighting  examples of students and teachers doing good things around the school. Whenever a teacher sees a student doing a good thing for no particular reason, that random act of kindness will be put on a poster and hung around the school. Mr. Bell says “having examples of positive behavior helps other people. . . Society sometimes, you just hear negative things about kids, but we do not have a kid problem in this world. The kids are alright and we need to keep showing that, and spreading that, by showing examples of the good things they do.”

In an interview with Mr. Bell, he said that he wanted to promote good behavior in students as well as spread positivity around the school. Artesians Attack doesn’t just include sports and clubs, but involves the entire student population. All students are encouraged to engage in acts of kindness, regardless of what activities they participate in. “It’s a whole school thing,” said Bell. “You think the first thought might be that you’re talking about a ball game or an athletic competition or something, but no, it involves everything. It could be the building trades getting after building the house, or you attacking that test you’ve got tomorrow. . . It’s a theme that encourages you to be proactive in life and to not just sit back and wait. It’s everything. It’s academics, it’s clubs, it’s life attitude in general, and things like that.”

The inspiration for Artesians Attack was Mr. Bell wanted to create a positive saying that would be a good thing for the school, and an inspiration to  students, something we could say to support a positive theme around school. He knew he wanted the first world to be Artesians, but had to think of a second word. He wanted the second word to start with the letter A and be a verb, “something to show action and to get attention”. Bell ended up choosing the word Attack, and thus began the Artesians Attack.